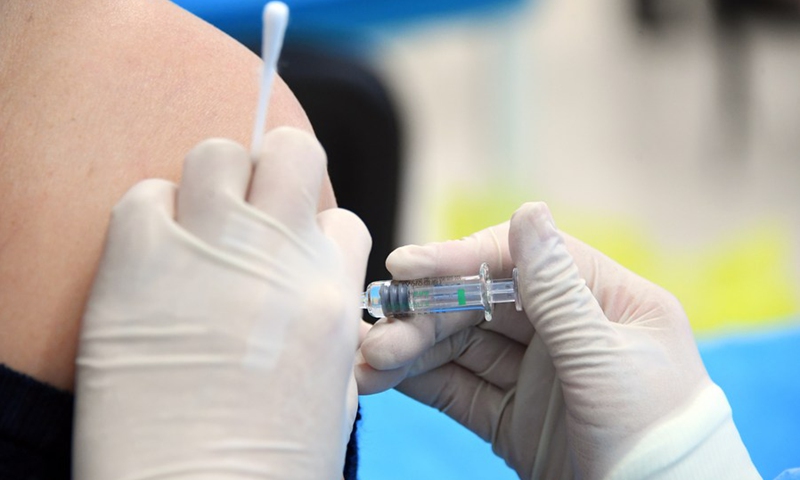 A medical worker inoculates a recipient with a COVID-19 vaccine at a temporary inoculation site in Haidian District in Beijing, capital of China, Jan. 11, 2021.(Photo: Xinhua)

Chinese top respiratory expert Zhong Nanshan warned that the new and more contagious coronavirus variant Omicron, although not much information is available now, may cause more challenges to the work of preventing and controlling the pandemic as the World Health Organization (WHO) said it carries a large number of mutations.

Zhong made the remarks at a forum on Saturday, noting that vaccination is certainly an efficient way to prevent the virus from spreading.

Zhong noted that about 76.8 percent of China’s population have been vaccinated, laying a good basis for the country to reach the target of 80 percent vaccination to build herd immunity by year end.

The new variant, named Omicron by the WHO was firstly discovered in southern Africa. Several other countries and regions including Israel and China’s Hong Kong have also identified cases caused by it.

The WHO has designated Omicron a “variant of concern” stating that the variant has a large number of mutations, triggering concerns of the efficacy of existing vaccines and drugs. The Organization flagged that several weeks of study would be required to obtain sufficient knowledge of the new variant.

One of China’s major vaccine producers Sinovac Biotech told the Global Times on Saturday that they are paying close attention to Omicron and have tapped into a global partner network to collect and obtain information and samples specific to the mutant virus.

Sinovac said they would launch study on the variant’s influence on its inactivated vaccine and necessity to develop a special vaccine against Omicron as soon as possible.

Sinovac said it possesses mature technology and mass-production capacity allowing it to fast track the development and manufacture of new vaccines to meet demand.

Global vaccine makers like Pfizer and Johnson & Johnson have also announced efforts to research the variant and upgrade their vaccines. The new variant, which has been called by some Western media as the “worst” new variant of COVID-19, has prompted Germany, Italy and Britain to suspend travel from South Africa, and the European Union is also proposing prohibiting travel from the country and its neighbors, according to media reports.

Stock markets across the world have also fallen sharply after the discovery of the variant. The FTSE 100 index of leading UK shares closed 3.7 percent down. Markets in Germany, France and the US also sank. Shares in airlines and travel firms were hit hard, with BA-owner IAG and Wizz Air down 15 percent, Tui shed 10 percent as fears have been raised due to the new variant over the resumption of global travel, BBC reported on Saturday.

But Chinese experts believe there is no need to panic as the large number of mutations does not necessarily indicate high infectivity, and China, with a strict and experienced epidemic prevention and control system, is able to protect domestic residents from the new variant.

“Many information of the variant remains unclear, such as how many places it has spread to, how many serious cases it causes or its fatality, so there is no need to be worried at the moment,” a Beijing-based immunologist told the Global Times on condition of anonymity.

In addition, the expert said since southern Africa is currently in summer, a severe outbreak is not very likely to occur.

At current stage, the threat of Omicron spilling over to China is less than the epidemic in Inner Mongolia and the upcoming Beijing Winter Olympics. And, if any dangerous signals are discovered, China can suspend all travel with southern Africa or apply stricter quarantine measures on arrivals from that area, the expert noted.