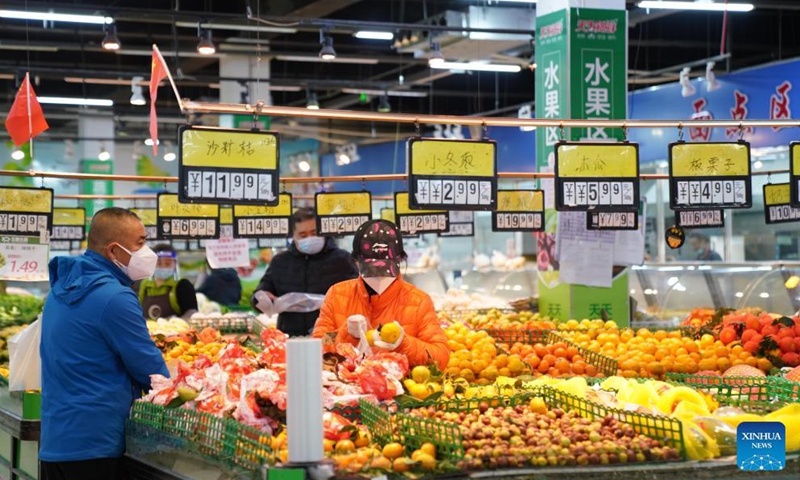 Chinese officials from the Ministry of Commerce (MOFCOM), East China’s Jiangsu and Shandong Provinces on Tuesday offered clarification after official notices about stocking up on daily necessities and recommended household emergency supplies sparked widespread speculations linking them to the Taiwan question, saying that the notices are part of regular government efforts to help residents prepare for potential emergencies.

The speculations started on Tuesday morning, after some social media accounts circulated screenshots of a MOFCOM statement issued on Monday night, which primarily focused on efforts to ensure stable supplies and prices of vegetables and daily necessities during the upcoming winter and spring seasons. But it was one sentence at the end that drew the most attention: “encouraging families to store a certain amount of daily necessities in accordance with their needs to meet daily and emergency needs.”

That sentence quickly went viral on Tuesday morning, especially on social media platforms, with articles linking the suggestion to rising tensions across the Taiwan Straits. Though the announcement did not spark any of the panic buying that has been seen overseas during the onslaught of the COVID-19 pandemic, related topics topped search trends on Sina Weibo on Tuesday.

Responding to the speculations, Zhu Xiaoliang, head of the MOFCOM’s Department of Market Operation and Consumption Promotion, said that the notice was intended to ensure stable supplies and prices of food for residents through various measures, including guiding firms in signing supply contracts.

“Judging from the current situation, the supply of daily necessities in various places is sufficient and should be fully guaranteed,” Zhu said in an online post.

Ensuring market supplies of daily necessities and smooth market operations is one of the major responsibilities of the MOFCOM, and the ministry issues such regular notices to ensure supplies and stabilize prices every year, Guan Lixin, deputy head of the circulation and consumption institute under the MOFCOM, also said earlier on Tuesday.

“This notice was issued based on the frequent natural disasters during the autumn and upcoming winter, soaring vegetable prices, sporadic coronavirus cases and the possible worsening La Nina weather phenomenon. It was arranged in advance. The aim is to better safeguard people’s daily necessities during this winter and next spring,” Guan said.

In an article on Tuesday, the official newspaper Economic Daily said that while netizens’ close attention is “understandable,” there is no need for excessive interpretation and anxiety.

The article, which drew over 110 million views on Sina Weibo on Tuesday, noted that the ministry’s suggestion was addressing recent COVID-19 flare-ups in China, reminding families to be prepared should they be required to undergo emergency quarantine.

However, further fueling the speculations were screenshots of “recommended list of household emergency supplies” issued by local authorities in Jiangsu and Jinan, capital of Shandong, which were also linked by some social media posts to the Taiwan question.

The lists, which were issued way before the MOFCOM’s notice on Monday, contained items such as instant noodles, bottled water, compressed biscuits and luncheon meat, according to screenshots widely circulated on social media on Tuesday.

Amid the widespread attention on Tuesday, the local emergency response authority in Jiangsu, which issued the list on October 22, said in a statement that issuing such a checklist was “normal work arrangement” aimed at improving disaster mitigation and self-rescue on account of more frequent extreme weather conditions and natural disasters this year.

Authorities in Jinan also clarified on Tuesday that the checklist of emergency supplies for households was issued in November 2020 and that such supplies were offered to 10,000 randomly selected families in the city starting in mid-September, as part of public services for residents, according to media reports.

Speculations continued on social media on Tuesday night, as compressed biscuits and Luncheon meat became the top most searched items on the internet alongside with clothes and consumer electronics during the festive Double 11 online shopping festival.

The Global Times contacted at least seven merchants on China’s e-commerce platforms, with all saying inquiries for compressed biscuits have increased, and one merchant said his biscuits stock was all sold out.

However, “there is no need to hoard or fall into panic buying, we have plenty of stocks,” a customer service representative with the merchant told the Global Times on Tuesday, noting that there have been “way more than usual” inquiries about compressed biscuits.

Regarding supplies of vegetables and other daily necessities, officials and market experts also noted that the ministry’s announcement was aimed at strengthening Chinese residents’ ability to cope with possible disruptions from unexpected seasonal factors, including COVID-19 and harsh weather conditions and that supplies will be ensured despite challenges.

Liu Shaotong, an agricultural products supplier based in Shandong, a major grain producer, said only vegetables in greenhouses could be supplied to the market as heavy rain and a sudden cold wave left farmland flooded.

“Since early October, vegetable prices have soared by 1.5 to 3 times. But with more and more vegetables in greenhouses ready to be harvested, the supply will improve this month for sure. There won’t be a big problem for this winter’s vegetable supplies,” Liu told the Global Times.

Meng Qi, an industry observer, also told the Global Times on Tuesday that the surging costs of coal and diesel fuel affected greenhouses’ cultivation and shipment of vegetables.

China’s food prices have remained stable as the consumer price index, the main gauge of inflation, rose 0.7 percent in September year-on-year, slower than in August, data from the National Bureau of Statistics showed.