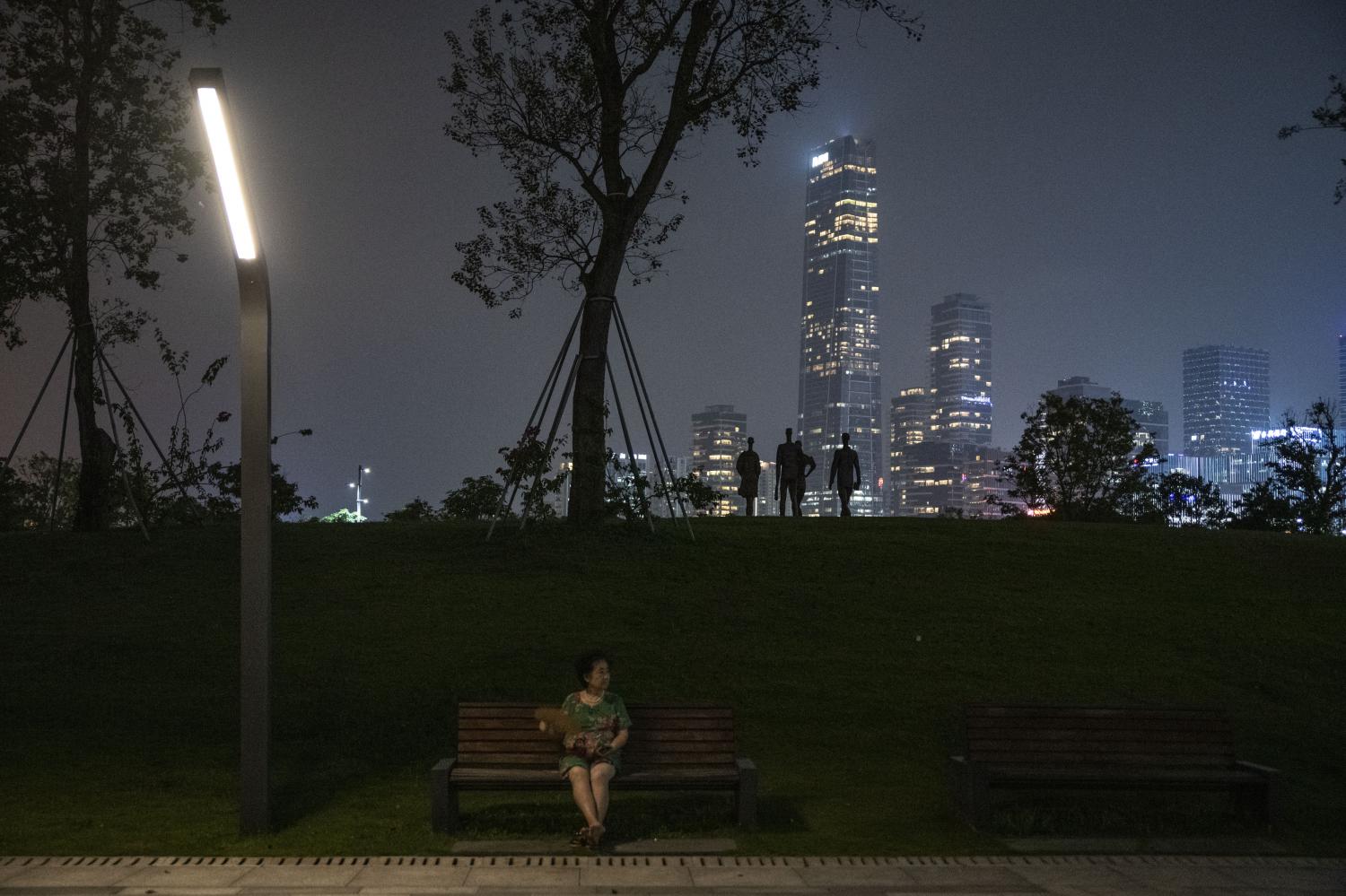 Visitors at a park in Shenzhen on Sept 30. Over 20 Chinese regions are facing electricity cuts as the nation’s power crisis deepens.  Bloomberg

China is struggling with widespread power shortfalls, dealing a blow to the recovery of the second-largest economy and risking disruption to global supply chains and heightened inflationary pressure around the world.

The power crunch, on a scale unseen in more than a decade, highlights how some of Beijing’s changing policy priorities, including its effort to limit carbon emissions, can ripple through a global economy that has been reshaped by the pandemic.

“There’ll be a cascading effect,” said Mike Beckham, Oklahoma-based co-founder and CEO of Simple Modern, which makes products such as insulated water bottles and backpacks. “As we started to comprehend the ramifications of what’s happening, we realized that this is potentially bigger than anything we’ve seen in our business careers.”

Two weeks ago, one of Mr. Beckham’s main suppliers, based in Quzhou city in eastern China, was told by the local government that it could only operate four days a week, instead of the usual six. In addition, it must adhere to a power-usage cap, which cuts the capacity of the factory by about one-third as a result.

Mr. Beckham anticipates U.S. retail prices for many products could increase by as much as 15% next spring, as appetite from retailers stays strong.

The shortages reflect a combination of factors. Coal prices have surged because of a shortage of domestic coal supplies, made worse by import cuts from Australia and Mongolia. That has prompted power stations to reduce output to avoid losses because of official caps on their selling prices.

Meanwhile, from the top, Beijing is seeking to enforce energy-efficiency targets, leading to officially sanctioned reductions in energy usage by some industries.

At the same time, demand for electricity has soared since the end in April 2020 of China’s pandemic-induced shutdown, as factories increased production to meet rising consumer demand in the West.

The power crunch in China adds to a global energy squeeze that risks upsetting the post-pandemic recovery.

Surging demand, swings in the weather and lackluster production have driven up natural-gas prices. The surge has hit output at European factories and household energy bills. It is also fueling anxiety in Europe and the U.S. over whether dwindling supply will be sufficient to power economies through the winter.

The U.K. government recently stepped in with subsidies to reopen a fertilizer plant closed by rising energy costs, which supplies a significant share of the country’s carbon dioxide, a byproduct needed in food processing. The French government said last week it would block any increase in household gas and electricity bills until the spring.

“Global markets will feel the pinch of a shortage of supply from textiles, toys to machine parts,” wrote Ting Lu, chief China economist at Nomura Holdings, in a note to clients on Sept 27.

He added that the resulting supply shock will likely further push up global inflation, especially in developed markets such as the U.S.

Steve Cooke, managing director of Cre8tive Brand Ideas Ltd., a Solihull, England-based distributor of promotional merchandise such as branded bags, clothing, pens and computer accessories, said he relies on suppliers who source 80% of their products from China.

Already this year, rising freight costs and supply-chain bottlenecks have pushed up his costs and lengthened delivery times for his customers. He said he expects those pressures to intensify as the power crunch squeezes production.

“We rely so much on China, it’s incredible,” Mr. Cooke said.

China’s leadership has responded as shortages swept through the country. On Sept 27, Vice Premier Han Zheng, who supervises the nation’s energy policies, summoned leaders of the country’s top state-owned energy companies to a closed-door meeting and ordered them “to increase coal supplies by all means,” according to two people familiar with the discussion and a summary of the meeting seen by The Wall Street Journal.

Participants were asked not to bring their cellphones to the meeting with Mr. Han.

Power rationing began in some Chinese provinces in late August but started to spread across the country in mid-September, when it began to hit households in northeastern China, which experienced sudden blackouts.

Newcastle thermal coal, a global benchmark for the variety burned to generate power, late last month breached record levels set during the 2008 global financial crisis to top $201 a metric ton, up 141% from the start of the year.

Prices of higher-grade metallurgical coal, used for steelmaking, are up 158% from the start of the year to a record $615 a metric ton in China, nearly twice its last high set in 2016.

In September 2020, President Xi Jinping pledged that China would strive to reach peak carbon emissions before 2030, a broad goal that has flowed into wide-ranging efforts to curb energy consumption.

The mission weighed on production of Chinese coal, already increasingly intermittent because of a spate of accidents at mining sites. Close to 60% of China’s power is generated by burning coal.

“For the coal industry, it will continuously be restricted by environmental and safety inspections,” said Shougang Fushan Resources Group Ltd., a producer based in China’s biggest coal province. “The shortage in coal supply, especially coking coal supply, cannot be alleviated in a short period of time.”

Fueled by China’s economic boom, coal demand earlier this year rose by around 20% year-over-year, before ratcheting down to single-digit levels in more recent months, official data show. In comparison, coal supply has fluctuated between shrinkages in some months and low single-digit increases in others.

In some provinces, strict energy-efficiency targets also played a role in the power curbs. In August, China’s economic planning agency released a report card that identified a number of provinces as being off-track in meeting their energy-efficiency requirements. In mid-September, these provinces began to target some high-energy industries in their power rationing.

The domestic shortfall of coal has been exacerbated by an unofficial Chinese ban on imports of coal from Australia, previously a major supplier, since late last year over Canberra’s call for an independent global inquiry into the origins of Covid-19. Imports from Australia and other countries generally account for up to 10% of Chinese coal consumption.

In addition, lower-than-usual supply of renewable energy has exacerbated the power supply issue in some provinces. The southwestern province of Yunnan, which produces hydropower, has been struggling with droughts throughout the year. In China’s Northeast, output from wind farms was extremely low for a few days due to the weather.

Acute electricity shortages are also partly due to the rigid pricing of electricity, said Dan Wang, an economist at Hang Seng Bank in Shanghai.

China’s government has long kept a cap on how much utilities can raise electricity prices, which are low by global standards. That reduced power plants’ appetite to generate power as prices of coal kept surging.

About 70% of coal-fired power plants in the county suffered losses as of June as coal prices soared, according to the China Electricity Council, which represents power generators.

Several regions, including Shanghai, Sichuan and Inner Mongolia, have eased price caps on on-grid tariffs, which are paid by companies to power plants. Starting on Oct 1, industrial users in China’s manufacturing hub of Guangdong province will need to pay up to 25% more to use electricity during peak hours.

During an internal meeting led by a top official of the economic planning agency on Sept 30, coal-production facilities were instructed to continue operation throughout the national holiday from Oct 1 to Oct 7, according to a summary of the meeting seen by the Journal.

Mr. Han, the vice premier, has ordered officials to control excessive consumption from high energy-consuming industries such as aluminum, steel, cement and petrochemicals.

“This is a system-shocking moment for both policy makers and companies,” said David Fishman, Shenzhen-based manager at the energy consulting firm Lantau Group.

Ramping up gas and coal supplies are short-term solutions but Beijing would need to think about diversifying its energy sources long-term, he said.

“This is the first time in my 15 years in China that the power cut has lasted so long,” said Thomas Broertjes, a manager at Foshan Oufeng Furniture Co. in Guangdong.

About two weeks ago, the local government began sending daily messages to the factory manager to announce whether they are allowed to operate that day.

The power shortage, on top of ongoing shipping bottlenecks and strict limits on travel into China, has also prompted Mr. Beckham of Simple Modern to evaluate the viability of moving some production back to the U.S. as the business environment in China has grown increasingly unpredictable.

“The party in China always prioritizes its objectives. As an outsider, it’s often hard to understand their motives,” he said.

Jason Douglas in London and Paul Ziobro in New York contributed to this article.