NEW YORK, Sept 24 (Reuters) – Worries surrounding debt-strapped property developer China Evergrande (3333.HK) have put investors on guard for evidence that the crisis may be spilling over into broader markets.

Evergrande, once China’s top-selling property developer, owes $305 billion, has run short of cash, and investors are worried a collapse could pose systemic risks to China’s financial system and reverberate around the world.

So far, there have been few signs of stress in money and credit markets, as well as other areas that would signal that the crisis was spreading beyond China.

“The linkage of Evergrande’s debt to other global financial actors is modest, despite the size of it,” said Stan Shipley, fixed income strategist, at Evercore ISI in New York.

“As a result the risk of contagion is small. China has more than enough financial resources to dampen a possible bankruptcy or restructuring,” he added.

The situation remains fraught, however, and few investors have forgotten the money market blow-ups during the 2008 global financial crisis, the 2011 euro zone sovereign mess that effectively shut European banks out of interbank lending, and most recently, the coronavirus pandemic that shook the global economy and led to massive bailouts from central banks.

Here are some key barometers of market stress investors are watching:

The U.S. LIBOR-OIS spread measures the difference between secured and unsecured lending in the United States and is seen as one measure of strain in money markets.

A higher spread suggests that banks are becoming more nervous about lending to each other because the cost has increased.

On Friday, the LIBOR-OIS spread narrowed significantly to 3.2 basis points from the pandemic high of 135.213 basis points in April last year, amid increased vaccinations and the reopening of U.S. states. 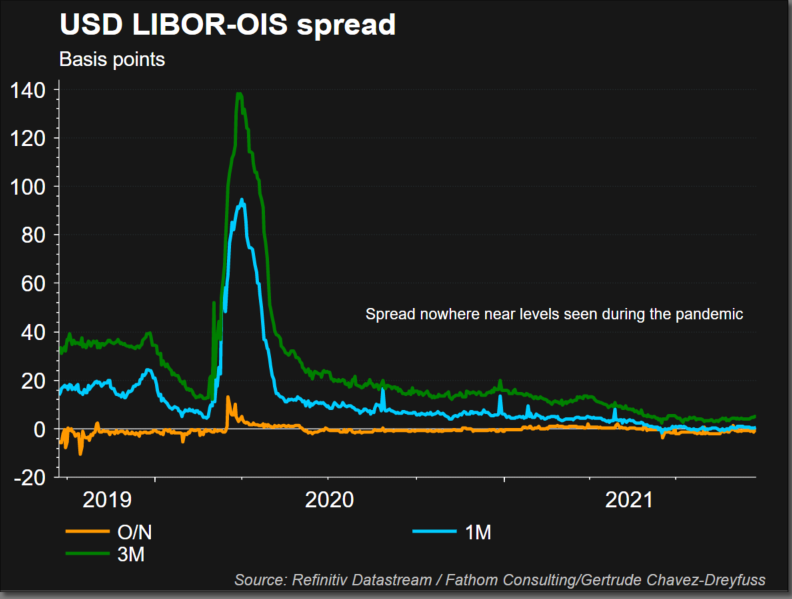 Cross currency swaps allow investors to raise funds in a particular currency from other funding currencies. For example, an institution with dollar funding needs can raise euros in euro funding markets and convert the proceeds into dollar funding obligations via an FX swap.

These instruments zoomed into the spotlight during the 2008 financial crisis and the euro zone debt crunch when global regulators poured in billions of dollars to unfreeze the market.

One-year euro/dollar basis swaps , which measure demand for dollars from European borrowers, was at -11 basis points on Friday, signaling willingness to pay a little more to get hold of dollars.

In other words, investors have to pay around 11 basis points over interbank rates to swap one-year euros into dollars. As the world’s most liquid currency, the dollar is a popular destination for investors during uncertain times.

Those levels are far from the highs seen during the pandemic or during the 2008 crisis. 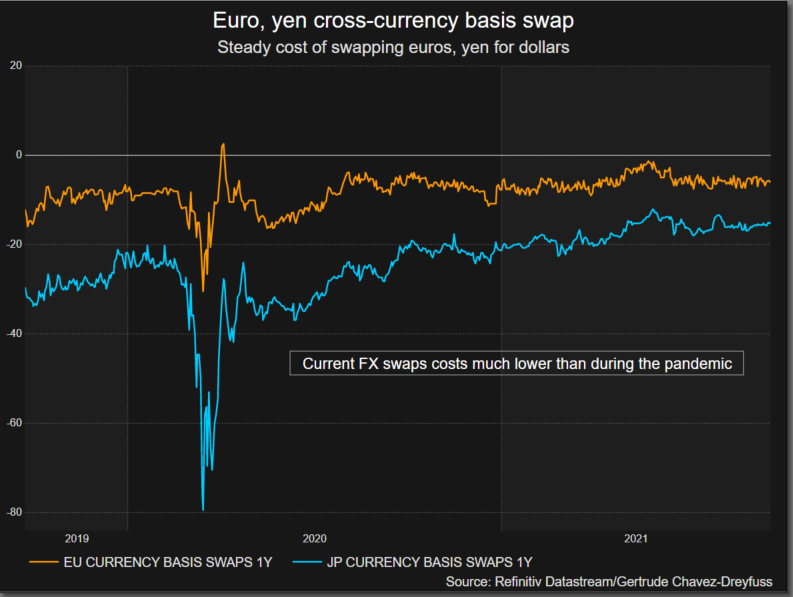 Broader currency market volatility, as gauged by Deutsche Bank’s(.DBCVIX) vol measure, was also on a downtrend. Late on Thursday, the index was at 6.02, down significantly from the 14.17 hit during the pandemic.

The ICE BofA MOVE Index (.MOVE), which tracks traders’ expectations of swings in the Treasury market, stood at 56.79 on Friday, compared to 163.70 touched in mid-March last year. 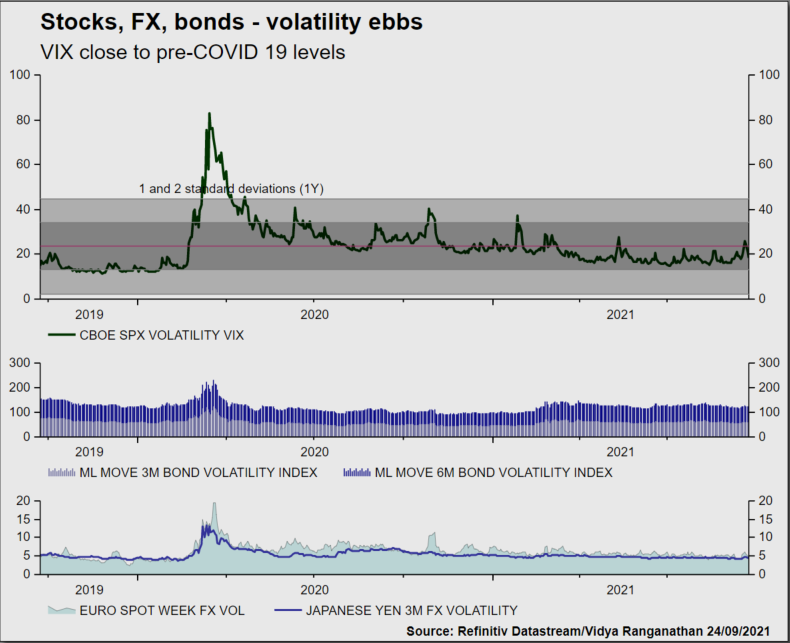 In line with the CDS market, the spread of the ICE BofA High Yield Index (.MERH0A0) – a commonly used benchmark for the junk bond market – has narrowed, suggesting improved sentiment on these assets.

On Friday, that spread stood at 303 basis points, compared to a pandemic peak of 1,009 basis points last year. 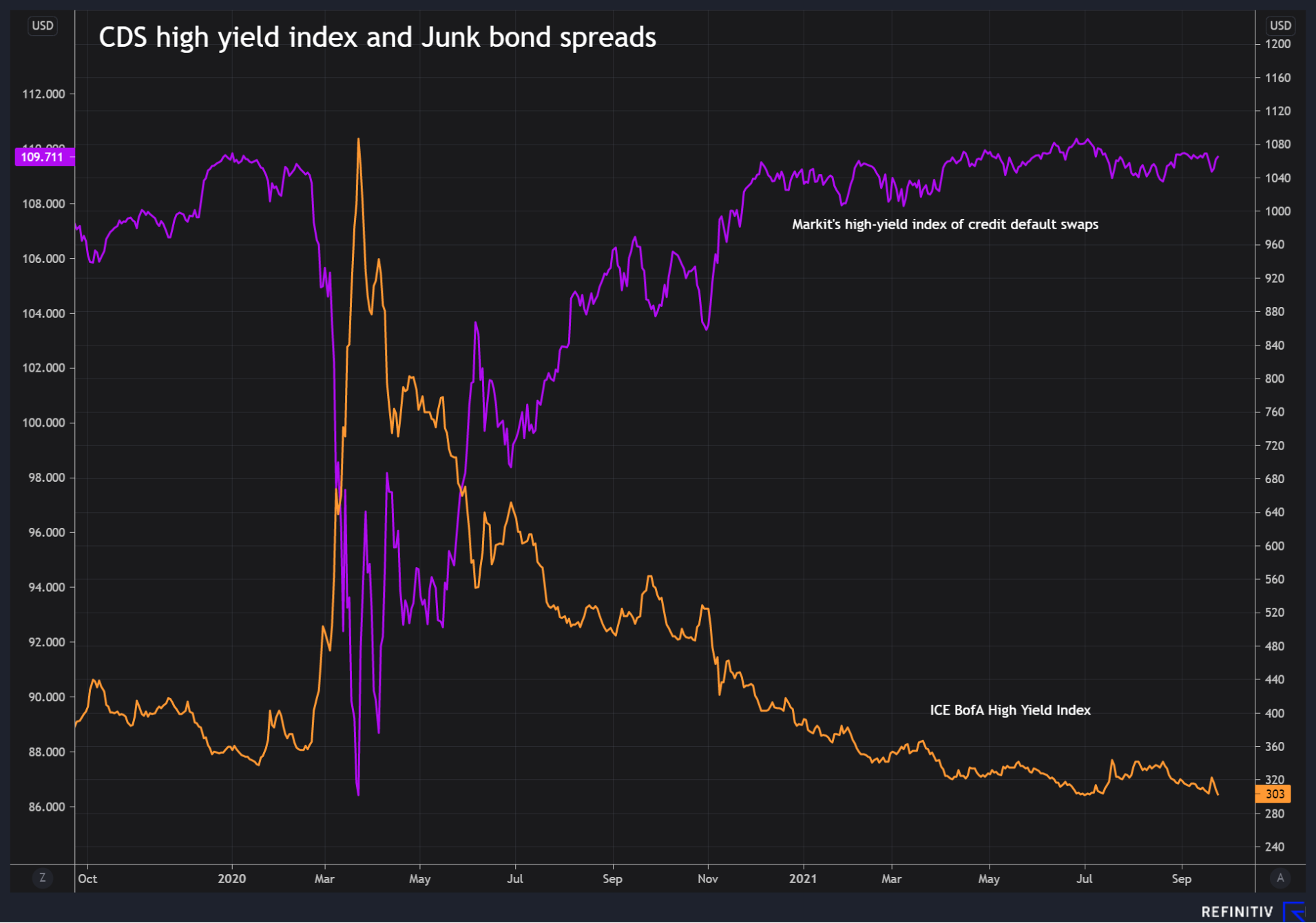