Justin Trudeau, the Canadian prime minister, said the two men, Michael Kovrig and Michael Spavor, were returning home after years of imprisonment in China. Their release came just hours after the U.S. had reached a deal to free the Huawei executive Meng Wanzhou.

About 12 minutes ago, the aircraft carrying Michael Kovrig and Michael Spavor left Chinese airspace, and they’re on their way home. They boarded at about 7:30 Ottawa time, along with Dominic Barton, Canada’s ambassador to China. These two men have gone through an unbelievably difficult ordeal. For the past thousand days, they have shown strength, perseverance, resilience and grace. And we are all inspired by that. I want to thank their families, who’ve been there for them, supporting them in every way they could. And supporting us in the work we’ve done to secure their release. I want to thank the countless diplomatic and other Canadian officials who have been tireless over the past two and a half years to secure the return of these two Canadians. I want to thank our allies and partners around the world and the international community who’ve stood steadfast in solidarity with Canada and with these two Canadians. And finally, I want to thank Canadians who have kept them in our thoughts and remain determined in the core value that Canadians have of standing up for each other and looking out for each other. 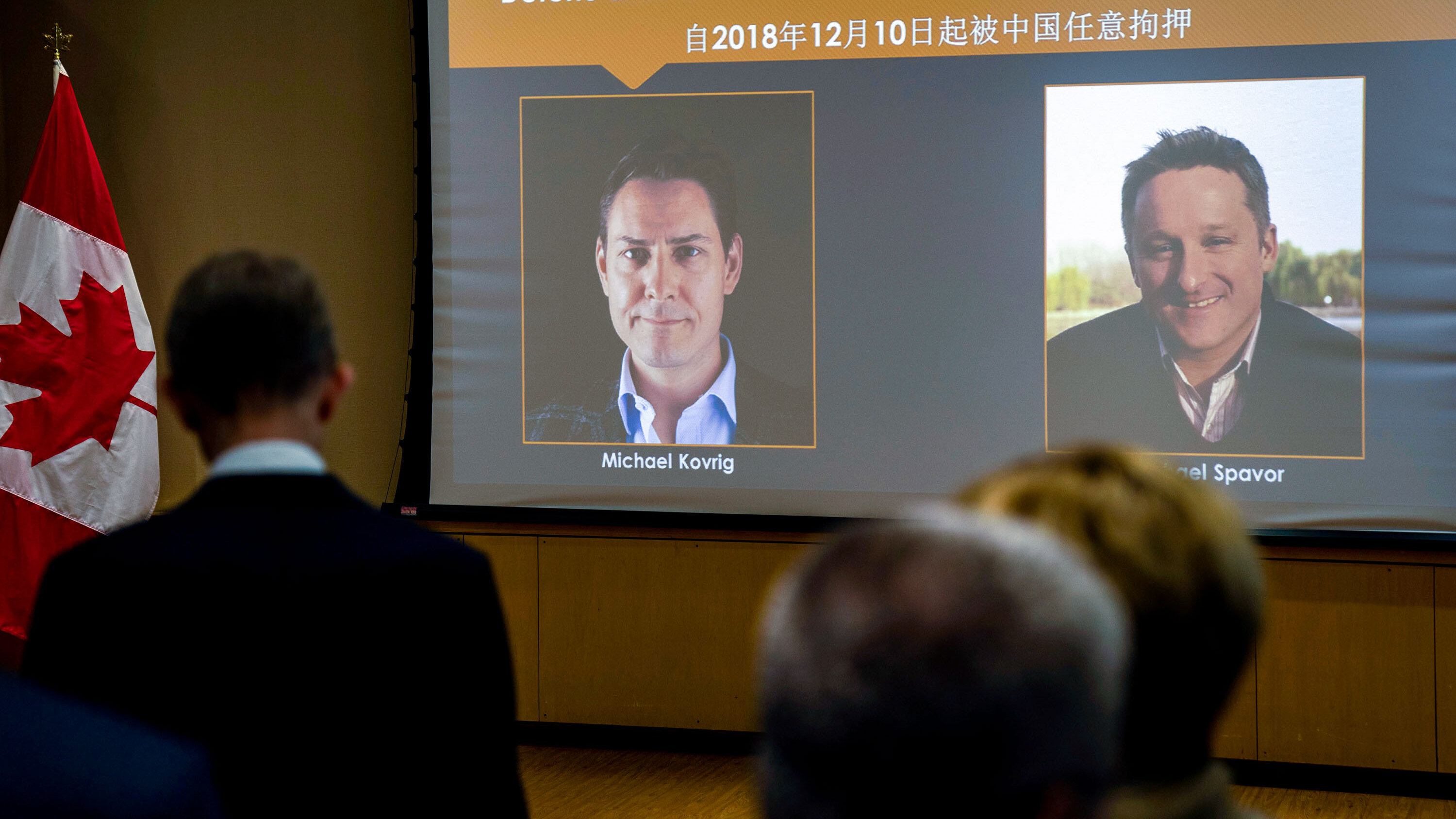 Justin Trudeau, the Canadian prime minister, said the two men, Michael Kovrig and Michael Spavor, were returning home after years of imprisonment in China. Their release came just hours after the U.S. had reached a deal to free the Huawei executive Meng Wanzhou.CreditCredit…Mark Schiefelbein/Associated Press

Two Canadians imprisoned in China since 2018 were free and on their way home, Prime Minister Justin Trudeau of Canada announced Friday night.

The release of the two men, Michael Kovrig and Michael Spavor, was made public just hours after the U.S. Justice Department reached an agreement that cleared the way for Huawei Technologies’ chief financial officer, Meng Wanzhou, to return to China in exchange for admitting wrongdoing in a fraud case.

The Canadian authorities arrested Ms. Meng, 49, in December 2018 at Vancouver International Airport, at the request of the United States, which put Canada square in the middle of a diplomatic standoff between two superpowers.

At about the same time, a private jet headed for China and carrying Ms. Meng passed out of Canadian airspace, according to Canadian news reports. Chinese state media later said that Ms. Meng was on her way home after “unremitting efforts” by Beijing.

Mr. Trudeau said details about the Canadians’ release, and the negotiations and events leading up to it, would have to wait until they were back in Canada on Saturday.

“These two men have gone through an unbelievably difficult ordeal,” Mr. Trudeau said. “For the past thousand days they have shown strength, perseverance, resilience and grace, and we are all inspired by that.”

Mr. Trudeau declined to comment on how the case, and the release, has affected Canada’s relationship with China, saying “there is going to be time for reflection and analysis in the coming days and weeks. But the fact of the matter is, I know Canadians will be incredibly happy to know right now, this Friday night, Michael Kovrig and Michael Spavor are on a plane and they’re coming home.”

The fate of Mr. Kovrig and Mr. Spavor has been bound to Ms. Meng’s case since her arrest. They were both detained nine days after the police in Canada arrested her.

The Chinese government has denied accusations of “hostage diplomacy,” but its detention, arrest and trial of the two Canadians offered a means for Beijing to remind Ottawa — and Washington — that their fate was also at stake. Secretary of State Antony J. Blinken said the United States welcomed the men’s release “after more than two-and-a-half years of arbitrary detention.”

For more than 1,000 days, the two Canadians were held in China in separate prisons, accused of espionage, without evidence, and forced to go months without visits from diplomats.

The two men — Mr. Kovrig, a former diplomat, and Mr. Spavor, an entrepreneur — were once relatively low-profile expatriates working in Asia. They became symbols of the consequences of Beijing’s increasingly aggressive foreign policy, their detentions widely perceived as retribution for Ms. Meng’s arrest.

In August, a court in northeastern China, where Mr. Spavor has lived, sentenced him to 11 years in prison after declaring him guilty of spying. Mr. Kovrig had been awaiting a verdict in his case.

During his detainment, Mr. Kovrig, who worked for a nonprofit organization, was confined to a small jail cell in Beijing and subjected to repeated interrogations. His diet was at times restricted to rice and boiled vegetables, he told his family.

The Chinese authorities kept Mr. Kovrig so isolated that he was not aware of the details of the coronavirus pandemic until October when Canadian diplomats informed him during a virtual visit, according to his wife, Vina Nadjibulla.

Mr. Spavor, a businessman, forged a career doing business with North Korea. He helped organize a visit to North Korea by Mr. Rodman, the retired basketball player, in 2013 and then a second visit the following year. Mr. Spavor’s company, Paektu Cultural Exchange, posted a picture showing Mr. Spavor with Kim Jong-un, the North Korean leader, on Mr. Kim’s yacht in 2013.

In Canada, where the detentions of the “two Michaels,” as the pair came to be known, was front-page news for months, the crisis had stoked widespread anger and underscored the country’s weakness in the face of a rising superpower.

Mr. Trudeau had repeatedly criticized China’s handling of the case and demanded the men’s release.

While Mr. Kovrig and Mr. Spavor were afforded minimal contact with the outside world during their imprisonment, Ms. Meng encountered few such restrictions. She had been free to take private painting lessons and go shopping, and, before the pandemic, had attended concerts by Chinese singers, though she was required to wear a GPS tracker.