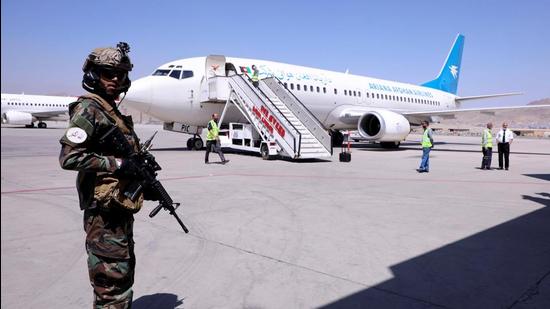 A member of Taliban forces stands guard next to a plane after its arrival from Kandahar at Hamid Karzai International Airport in Kabul, Afghanistan, on Sunday. (REUTERS)

The US is bound to make mistakes more serious than those in Afghanistan if it is unable to learn due lessons, China’s Wang Yi said

China has sought common ground with Iran on the formation of the Taliban government in Afghanistan with foreign minister Wang Yi saying Beijing and Teheran should strengthen communication on a smooth transition of power in Kabul.

Noting that the Afghan Taliban may announce the formation of a new government in the near future, Wang, who is also state councillor, told Iranian foreign minister Hossein Amir-Abdollahian that China hopes the new government in Kabul would reflect openness and inclusiveness, completely cut off ties with all terrorist organisations and establish good relations with all countries, especially neighbours.

“As common neighbours of Afghanistan, China and Iran need to strengthen communication and coordination to play a constructive role in achieving a smooth transition and peaceful reconstruction of Afghanistan,” he said in a phone conversation.

Wang also criticised the US, saying that “the claim of the US that the withdrawal from Afghanistan allows it to shift its focus to China and Russia not only serves as an excuse for its own failure, but also reveals the nature of its pushing for power politics in the world”.

If the US is unable to learn due lessons, it is bound to make mistakes more serious than those in Afghanistan, Wang warned.

Amir-Abdollahian said that the root cause of the chaos in Afghanistan is the irresponsibility of the US. “Iran also holds that Afghanistan should establish a broad and inclusive government reflecting the interests of all ethnic groups in the country,” the official Chinese foreign ministry statement quoted him as saying.

Iran, he said, shares the view that Afghanistan should form a broadly inclusive government that reflects the interests of all ethnic groups and called on the international community to provide humanitarian assistance to prevent the volatile situation in Afghanistan from triggering a refugee flow.

Iran is willing to strengthen coordination with China to help Afghanistan out of the predicament as soon as possible, the Iranian foreign minister added.

Thank you for subscribing to our daily newsletter.