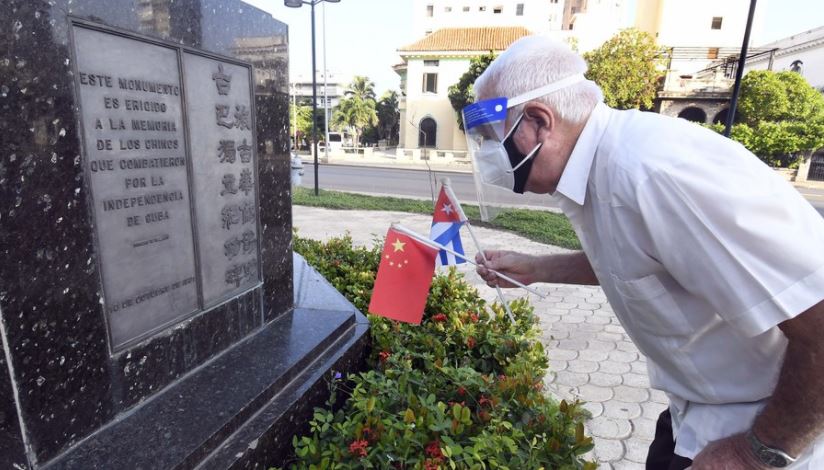 Retired Lieutenant Colonel Jose Antonio Subires, a warplane technician, lays a wreath at the Monument to the memory of the Chinese who fought for the independence of Cuba, in Havana, capital of Cuba, on 4 September 2021./Xinhua

Retired Lieutenant Colonel Jose Antonio Subires, a warplane technician, lays a wreath at the Monument to the memory of the Chinese who fought for the independence of Cuba, in Havana, capital of Cuba, on 4 September 2021./Xinhua

A batch of retired Cuban combat pilots on Saturday marked the 60th anniversary of the beginning of their study in China after the triumph of the socialist revolution on the island in 1959.

The pilots laid a wreath of flowers here at the monument to Chinese fighters during Cuba’s Independence War.

Addressing the audience, Manuel Rojas, a former pilot and retired colonel, highlighted the strong links between the Chinese and Cuban people.

“We all very much thank Chinese instructors for their support during the time we were away from home,” he said.

“Traveling to China was the greatest adventure of our lives. Chinese people have much love to give,” added Rojas.

The ceremony came ahead of the celebration of the 61st anniversary of the establishment of diplomatic relations between China and Cuba which falls on Sept. 28.

Jose Antonio Subires, another pilot who attended the event, told Xinhua that Chinese instructors contributed to his professional progress.

“I was 19 years old when I first visited China,” he said. “I will never forget the values and principles that Chinese colleagues instilled into me. Studying in China changed my life.”

After a two-year stay in China, 117 pilots and 106 ground technicians from Cuba graduated in 1963, before joining the Cuban Air Force and performing international missions in Angola, Ethiopia, Nicaragua, and other countries.

Jorge Ricardo Gomez, a retired combat pilot in his 70s, told Xinhua that the brotherhood between China and Cuba has stood the test of time.

“Chinese people gave us a strong sense of unity and friendship. The memories of our studies in China are rooted in our hearts,” he said.

The ceremony, which took place under social distancing guidelines and COVID-19 protocols, concluded with a martial arts performance by the Cuban Wushu School.