“Anyone who dares to try, will find their heads bashed bloody against a great wall of steel forged by over 1.4 billion Chinese people,” added Xi, in comments that later appeared to be softened in the government’s own English language translation.

Speaking in front of a reported crowd of 70,000 at a highly-choreographed ceremony in Tiananmen Square, Xi delivered a strongly nationalist speech in which he claimed that only the party could ensure China’s continued stability, and any attempt to divide it from the country would fail. “Without the Communist Party, there will be no new China,” Xi said to thundering applause and cheers.

The President’s speech capped an occasionally rainy morning of celebrations in the capital to mark the party’s centenary, including patriotic songs, speeches from officials and flyovers by the People’s Liberation Army Air Force.

The Chinese Communist Party was founded in secret in a small brick house in Shanghai’s former French Concession by around a dozen delegates, in July 1921.

Its subsequent rise and continued monopoly on power has confounded its critics, with the party proving itself adept at changing at crucial moments to ensure the survival of its authoritarian one-party rule. Under its founder and former chairman, Mao Zedong, millions starved to death during protracted periods of famine and political crisis. Today, China is the world’s second-largest economy, with some estimates suggesting it is poised to overtake the United States.

However, Thursday’s celebrations follow a turbulent two years for the unelected party, marked by its perceived mishandling of the initial Covid-19 outbreak in Wuhan in December 2019, growing international outrage over alleged human rights abuses in Xinjiang and the rise and later suppression of large scale pro-democracy protests in Hong Kong.

Numerous challenges also lie ahead, from a slowing economy, an aging population and a shrinking workforce, to an increasingly united democratic West that is determined to counter China’s rise.

Speaking on Thursday, Xi, arguably the country’s most powerful leader since Mao, announced the party had accomplished its centenary goal of creating a “moderately prosperous society” in China. “We are now marching in confident strides toward the second centenary goal of building China into a great modern socialist country in all respects,” Xi said.

In his keynote speech, the Chinese leader didn’t just focus on the past, but instead looked to the next generation of the Communist Party, appealing to young people to “live up to the expectations of the times.”

Young people should take the “realization of the great rejuvenation of the Chinese nation as their own responsibility, strengthen their ambition, backbone, and confidence in being Chinese,” Xi said. 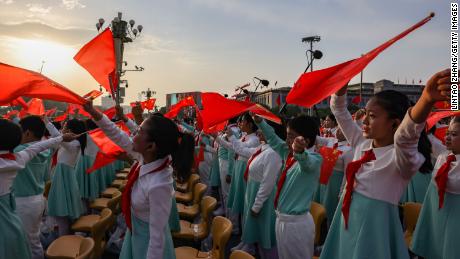 Chinese students from a choir perform during the celebration marking the 100th anniversary of the founding of the Chinese Communist Party at Tiananmen Square on July 1 in Beijing, China.

In a continuation of his hardline foreign policy, Xi said while China would welcome “helpful suggestions” from other governments, it would not accept “sanctimonious preaching.“

On the subject of Taiwan, the self-governed democratic island that the Chinese government has long maintained is part of its territory, Xi said its “reunification” with the mainland was part of the “historic mission” of the Communist Party.

The Chinese leader also vowed to “utterly defeat” Taiwan “independence.” In the past, Xi has refused to rule out the use of force in his efforts to “reunite” Taiwan and the mainland and although he didn’t make similar threats in Thursday’s speech, the Chinese leader did call for the country’s armed forces to be elevated to “world-class standards.”

“We must accelerate the modernization of national defense and the armed forces,” Xi said.

In response to Xi’s speech, Taipei said its resolve to protect the island’s sovereignty and democracy remained “unwavering.”

And at a time when Hong Kong’s civil liberties are increasingly under threat from new national security legislation passed by Beijing, Xi said Thursday that “social stability” must be maintained in the major financial hub, as well as China’s “sovereignty (and) security.”

Hong Kong’s annual July 1 pro-democracy protest march was canceled for the first time in 18 years on Thursday, and thousands of police patrolled the streets of the city to watch for any signs of dissent.

“No one should underestimate the great resolve, the strong will, and the extraordinary ability of the Chinese people to defend their national sovereignty and territorial integrity,” Xi said.