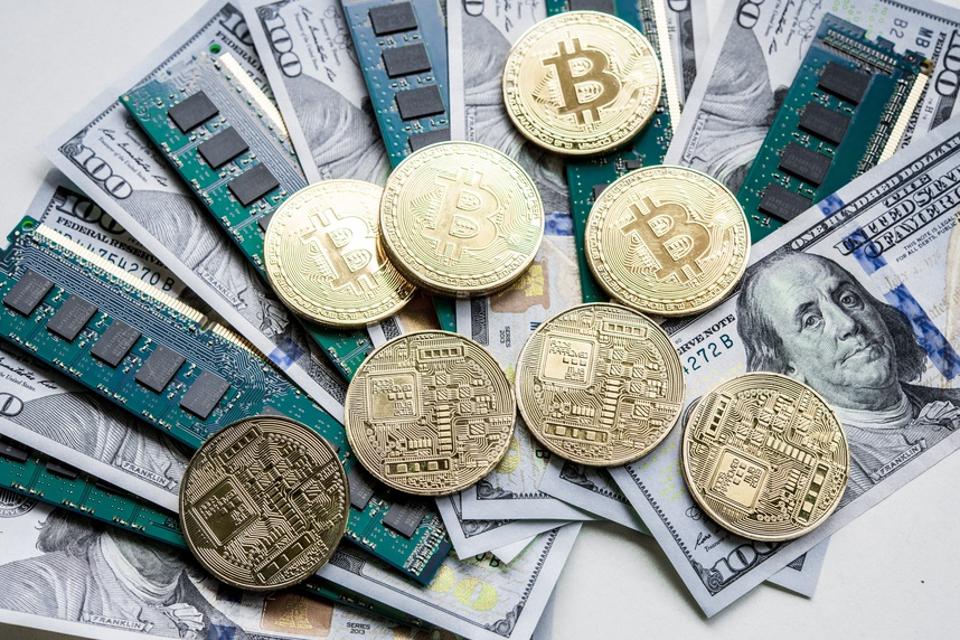 HONG KONG, HONG KONG – NOVEMBER 9: As a visual representation of the digital Cryptocurrency, Bitcoin … [+] with US Dollar on November 9, 2017 in Hong Kong, Hong Kong. Cryptocurrencies – Bitcoin, have seen unprecedented growth in 2017. (Photo by studioEAST/Getty Images)

When paper money was first invented in China’s imperial history, in the late Tang Dynasty, it had the distinct advantage of being lighter than the commodities that roughly embodied currency then: gold, silver, and coins. As a more portable version of what had come earlier, it gained the favor of merchants and eventually became a government monopoly. Paper money then was an extension of Chinese block printing: one fundamental invention spawned a key economic functionality.

Yet, this dramatic improvement in functionality, when absorbed by a great power of the time, eventually led to disaster due to centralized influence: the Yuan Dynasty, representing the Mongols who conquered China (who created the largest land empire the world had ever seen until the British Empire) would eventually print their way to inflationary oblivion after recklessly printing the paper currency they had every bit of control over.

It was in this period that Marco Polo visited China. He was the first Western source to note the economic importance of these paper bills: an innovation that would not be embraced in Europe until the 17th century, but which would eventually form the foundation of paper money as a government monopoly embraced around the world — including the United States.

The integration of China in its various forms in global markets has always been a key component of global economic history and financial systems. As reserve currencies have ebbed and waned, imperial China’s wholesale absorption of silver and food types from Spain’s imperial conquests in Mesoamerica and beyond formed the Columbian Exchange that formed the first truly global financial system — and laid rise to the first truly global trade empire, the British Empire.

The British pound rose and fell on its ability to conduct trade around its large, unified empire: the fulcrum of this trade was the East India Company, which in the 1700s and 1800s accounted for nearly 50% of world trade. The East India Company could only do this with trade with Qing China, and in that respect waged several wars to open China’s borders to trade — including the Opium Wars that today form the foundation for Chinese nationalist venom and revanchism.

We now arrive at the present moment: the ascent of the United States dollar to world reserve currency as the focus of its military-commercial trade system after the ashes of WW2, with concerns about a rising yuan embodying a new innovative format: the digital yuan. Is the People’s Republic of China trying to leapfrog the “rules-based world order” enforced by the United States military with digital money following digital innovation?

The question doesn’t matter as much if you don’t have to choose either side. Hal Finney and other bitcoin pioneers long anticipated a world where central banks and retail banks would adapt bitcoin like the gold of yore.

Bitcoin was intended as an independent hedge that would not rely entirely on government fiat, like the commodities and coins of old, such as salt currencies, that remained region-specific before the wholesale implementation of fiat by force.

By placing economic value on scarce computing power, something that was being independently developed in many states and by many different individuals, the idea was to shift away the ability for any centralized entity to control the system — with the most powerful centralized entities being states, and the most powerful of those being an emerging China and the incumbent United States.

The People’s Republic of China today is in many cases a fundamental carbon copy of the roots of the American economic system while shunning its political principles. There are significant variational changes that make a difference: the People’s Bank of China does not even have the shred of separation of power from the State Council it reports to, for example.

And of course, the People’s Republic of China (PRC) is politically censorious and has a history of atrocities over and above instances like Kent State that can never be discussed publicly with comfort, from the Cultural Revolution to Tiananmen Square.

Yet economically, Keynesian principles are enshrined in practice in both, and serve as a sort of state religion. The Chinese state has anchored its legitimacy to the economic outcomes it can deliver to its people, meaning a close observation of GDP growth. Its history of inflation and the movements it has inspired and bolster (from the Communist ascent to power to Tiananmen Square) has led it down to a more neoliberal stance on monetary policy than any of the zero-percent policy rate central banks around the world — fitting for a country that took Milton Friedman’s advice on economics.

Its catapult into the modern global trade system came after negotiations with the WTO — and the United States primarily. PRC has borrowed from the American trade system — and lent it the surplus in the form of holding Treasuries and USD in its foreign exchange holdings. The two states are tied together in ways that the simple notion of couplehood can never fully decipher.

Both states are now conducting their great power conflict primarily through the weaponization of their trade systems, the attempt to gain allies through debt-trap diplomacy and trade — ultimately leading to a fundamental defence of the United States dollar and a rising, more internationalized yuan, buffeted by the IMF’s designation, and the growing availability of financing options such as Dim Sum bonds denominated in the Chinese yuan.

As PRC decreases its significant holdings in USD and tries to trumpet its international image outside of the G20 with vaccine diplomacy and infrastructure development, both sides are now engaged in a conflict of economies as much as (or perhaps more than) ideals.

While the European Union and the Euro are a consolidated incumbent currency which is currently second in foreign reserves held by central banks, many of its members have overlap with NATO, it is systematically closer to the United States, and US-Europe cooperation on SWIFT implies that while the EU is not a perfect proxy for the United States (after all, Germany moved to sign a comprehensive trade agreement between the EU and PRC independent of American concerns), it is nowhere close to an independent hedge between the US and PRC’s currency flows.

Bitcoin is that hedge, not only for individuals and organizations trying to navigate the intersect between both the USD and Yuan, but nation-states that want to take a real crack at a litany of “non-aligned” states, something that will (hopefully) happen in practice rather than in theory as in its Soviet era analogue.

The United States might trumpet a “rules-based” international order — but it enforces many of the rules. Countries may remember the blunt “America First” of Trumpism, or they might remember the silent, yet ultimately same vein of thought embodied in the Biden Administration’s hoarding of vaccines, or the Federal Reserve’s focus on border-bound employment over all other considerations. For the stateless, Trump tells them to loudly get away: and while Vice President Harris likes to be more reserved, she expresses more or less the same sentiment.

And while the current great power conflict is often framed in terms of values, it is economic considerations that will likely matter most. After all, Great Britain almost intervened militarily on behalf of the Confederacy not because it shared its values (slavery was banned decades earlier in Britain than in the United States), but because of the closeness of its economic elites to the cotton trade in the Confederacy.

Bitcoin is reviled by both economic elites in the People’s Republic of China and the United States, one of the rare things they openly agree. A large reason why is because they recognize its potential power to erode the great power game they are both playing against each other. By contesting the idea of fiat monetary monopolies and by fuzzing its control over people within its borders, bitcoin decreases the incumbent pie of the United States that the PRC wants to acquire. As a result, the People’s Republic of China has worked to implement a State Council driven provincial ban on bitcoin mining (picked up by some provinces, while lagging in others), while in the United States, regulations were considered for “unhosted” wallets.

The US and China may be divided on many things, but on bitcoin they can be surprisingly united — both struggle with their traditional tools of broad external and internal influence now having to be refocused on both internal and external adherents, some of whom don’t believe in the fundamental lie of the fiat that powers them.

El Salvador is a tangible example of a country trying to navigate the US-China divide with bitcoin. In 2018, the previous President flipped recognition of Taiwan to the People’s Republic of China in return for greater economic integration with China. It faced the venom of American sanctions. When the current President, Nayib Bukele, thought to reverse this change, he was convinced otherwise by Chinese investment in infrastructure.

Notwithstanding the particulars of his individual dynamics: his millennial populism, his domestic tendency towards power and consolidation, and his need to market himself to the world — his country is exactly stuck in the middle between the maelstrom of Chinese and American economic pressure. Relief that comes from a (more) non-aligned source has the effect, even if not intended, of pushing the country away from both influences and allowing it to be more independent.

Bitcoin then is not only a modernized version of Esperanto that strikes at money rather than language — an attempt to bridge individuals within nations that want to hedge against their nation’s debt and its ability to inspire war with each other — but also a meaningful geopolitical hedge for nation-states looking to navigate a Third Way between China and America’s pressure, trying to gain the support of miners based in one location but perhaps not beholden to it, and the same for those who run nodes or hold bitcoin in their cold wallets.

Though Esperanto itself was eventually used in much the same way bitcoin is in its early stages as a marketing exercise for a new form of internationalism by ironically centralizing states of the time — it, in its thinkers, words, coins, writers and tracts, left a more important legacy: small traces of her time on Earth, visible only to those who know where to look, thoughts and ideas of yesterday that would become the monero of tomorrow.