The unifying theme behind Joe Biden’s European tour this week is a country which will not be at any of the meetings and may not even be mentioned in the final communiques: China.

Before setting out on his first foreign trip as president, Biden has made clear that the competition between the world’s democracies and its authoritarian regimes – mostly importantly Beijing – is the defining global challenge of the age, with victory anything but guaranteed for the US and its allies.

To win, the president believes the democratic camp will have to show far greater cohesion and ambition in response to the world’s biggest problems, most importantly climate change and the pandemic.

That will be his core message at a string of summits over the coming days: the G7 leaders in Cornwall, Nato and the EU in Brussels and then a face-to-face encounter with Vladimir Putin in Geneva.

While Russia is seen as the most aggressive autocracy in the short term – meddling in elections, launching cyber-attacks and renewing military pressure on Ukraine – Biden is focused on the long-term challenge of an economically successful, militarily assertive China, increasingly under the exclusive control of President Xi Jinping.

Biden is a recent convert to this assessment Just two years ago, he was arguing that fears of China’s rise were overstated.

“China is going to eat our lunch? Come on, man,” he told an audience in Iowa in 2019. “I mean, you know, they’re not bad folks, folks. But guess what? They’re not competition for us.”

The intervening months have shaken that complacency. In a two-hour phone call in February, according to the Wall Street Journal, Xi explained to Biden at length how China intends to surpass the US as the world’s pre-eminent power.

The president is said to be preoccupied with the theme, raising it persistently in both private and public conversations. In his Washington Post commentary on Saturday about his trip to Europe, Biden mentioned China four times.

“This is a defining question of our time: can democracies come together to deliver real results for our people in a rapidly changing world?” the president asked. “Will the democratic alliances and institutions that shaped so much of the last century prove their capacity against modern-day threats and adversaries? I believe the answer is yes. And this week in Europe, we have the chance to prove it.”

Thomas Wright, the director of the centre on the US and Europe at the Brookings Institution, argues that the issue is sufficiently central to the president’s thinking to deserve the title of the “Biden doctrine”. 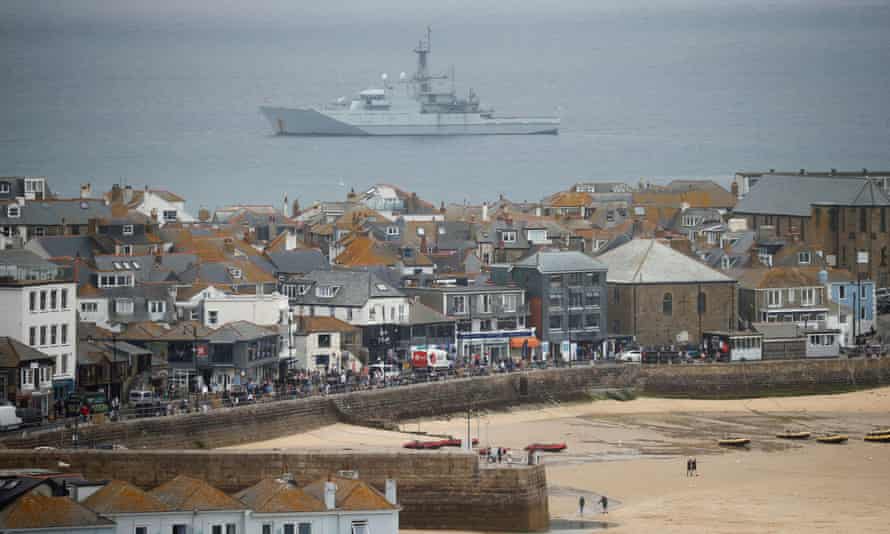 A Royal Navy ship is pictured near St Ives, as security preparations are under way for the G7 leaders summit, in Cornwall. Photograph: Phil Noble/Reuters

“In his view, the United States is in a competition of governance systems with China,” Wright wrote in the Atlantic on Wednesday. “His response is not about spreading democracy at gunpoint or even democracy promotion per se, but about showing that democracy can deliver – at home and abroad.”

Amanda Sloat, the senior director for Europe on Biden’s national security council, said the stakes in terms of global competition made this moment in relations with Europe comparable to the aftermath of the second world war.

“Our countries laid the foundations of the world economy after world war two. We wrote the rules of the road, based on shared democratic values on fair competition and on transparency,” Sloat said at a discussion of Biden’s trip at the Center for a New American Security.

“It’s time for the US and the EU to take a look at updating these rules,” she added, mentioning joint efforts to combat Covid and joint action on the climate emergency.

The facts of the trip themselves underline the renewed centrality of the transatlantic partnership. Biden is the first president since Jimmy Carter to make Europe the destination of his first trip in office. The US-EU summit will be the first since 2014, and Nato leaders will be holding their first meeting and issuing their first joint communique since 2018.

While reasserting US commitment to the collective security at the heart of Nato, placed in doubt by Donald Trump, Biden is seeking to nudge the alliance into looking further east.

Sloat said it was important for Nato “to take action to ensure that it is appropriately postured to deal with newer threats”.

“China is one of those, and I think leaders are going to be taking stock of the need to adapt to the strategic challenge that Beijing poses to our collective security, prosperity and values,” she said.

There is reluctance among some European allies to foment what they fear is becoming a new cold war. The British hosts of the G7 summit do not want to alienate Beijing ahead of the COP26 climate change meeting in November in Glasgow. China is unlikely to be singled out in the leaders’ communique at the end of the Cornwall summit for that reason.

The emphasis will be on demonstrating unity and common purpose, for example, announcing a new global vaccine production initiative – an arena in which the west is in direct rivalry with China.

“And we will do all of this without strings attached, without conditions, and with the sole purpose of trying to save lives.”

The key message, Singh said, was to show unity around a set of shared values and to project self-confidence that “our democratic way of life delivers results, and that we can meet the world’s biggest challenges”.