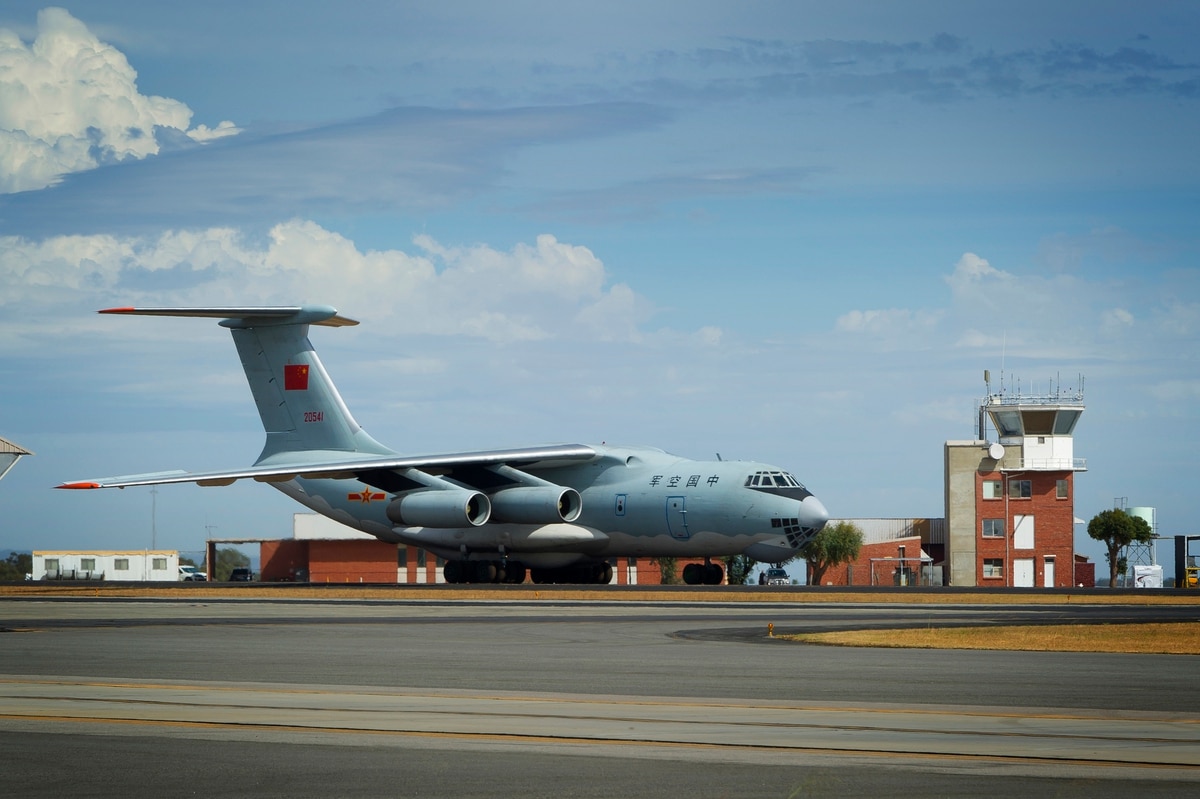 A Chinese Ilyushin Il-76 taxies into position at the Royal Australia Air Force Base Pearce in Western Australia. (Courtesy of the Australian Defence Department)

MELBOURNE, Australia — China has sent more than a dozen military transport aircraft to the vicinity of disputed shoals in the South China Sea administered by Malaysia, prompting the latter to scramble a fighter jet to investigate.

The Royal Malaysian Air Force, or RMAF, said in a news release that 16 Xi’an Y-20 and Ilyushin Il-76 airlifters of the People’s Liberation Army Air Force, or PLAAF, approached to within 60 nautical miles (69 miles) of Malaysia’s coast.

The news release also said the Chinese force approached in a “tactical formation” and was first detected by an air defense radar in the eastern Malaysian state of Sarawak at 11:53 a.m. local time on Monday.

It also said the as-yet unidentified aircraft were flying at 290 knots in a southwesterly direction in neighboring Singapore’s flight information region before turning to the south and crossing into international airspace administered by Malaysian air traffic control, operating at altitudes between 23,000 and 27,000 feet.

The aircraft failed to respond to several attempts by by Malaysian air traffic controllers to contact them, after which the RMAF scrambled BAE Systems-made Hawk 208 light combat jets from nearby Labuan air base at 1:33 p.m. after the “suspicious aircraft” were first sighted, to intercept and identify them.

Malaysia also released a map showing that the PLAAF jets flew past Luconia Shoals before turning back 60 nautical miles from the Malaysian coast in the vicinity of James Shoal. Both of these maritime features are claimed by Malaysia, and they are inside its exclusive economic zone. However, China also claims ownership of the shoals, with both located within China’s so-called nine-dash line, which it uses to lay claim to parts of the South China Sea. Luconia Shoals, which is known to Malaysia as Beting Petinggi Ali, has seen an almost constant presence by ships belonging to the Chinese Coast Guard, according to the Asia Maritime Transparency Initiative, which bases its research on ship-tracking data.

This is not the first time PLAAF jets have approached Malaysia, although it appears to be the first time such a large force has been observed. Sources said the PLAAF transports involved in Monday’s incident originated from bases in China and not the air bases the country built on reclaimed islands in the South China Sea.

Thanks for signing up!

The lack of communication with air traffic control from the PLAAF aircraft and their routing near disputed shoals was described by the RMAF as a “serious matter that threatens national security and aviation safety.” Foreign Minister Hishammuddin Hussein issuing a statement saying that Malaysia will issue a diplomatic protest against the overflight.

The flightpath of the Chinese aircraft suggests they were likely conducting a long-range airlift surge exercise. China’s embassy in Malaysia told Singapore’s Channel News Asia that the aircraft were conducting overflights in accordance with international law, stressing that they did not enter Malaysia’s territorial airspace.

It is also unclear whether the PLAAF jets communicated with Singaporean air traffic controllers as they flew through international airspace administered by that country, although flight-tracking websites showed a Gulfstream G550 airborne early warning aircraft belonging to the Republic of Singapore Air Force heading east over the South China Sea soon after the PLAAF jets were first picked up on Malaysian radar.