Jordanian King Abdullah II’s half-brother Prince Hamzah, allegedly involved in a plot to destabilize the country, will not face trial, the prime minister tells a closed session of parliament.

Lawmakers who attended the meeting also quoted Prime Minister Bisher al-Khasawneh as denying there had been an “attempted coup.”

Earlier this month, the government accused Hamzah — a former crown prince who was sidelined as heir to the throne in 2004 — of involvement in a conspiracy to “destabilize the kingdom’s security” and arrested at least 16 people.

The king broke his silence last Wednesday to tell the nation the worst political crisis in decades was over and on Sunday Abdullah appeared in public alongside Hamzah.

Khasawneh on Monday “denied there had been an attempted coup,” Islamist MP Saleh al-Armouti tells AFP. “So if there hadn’t been a coup, what happened?” he asked.

According to Armouti, the prime minister said Hamzah will not face trial, unlike others held on allegations of trying to destabilize Jordan.

“Prince Hamzah’s case has been resolved within the royal family,” Khasawneh told deputies, he says.

Khasawneh said a file concerning the case was handed over to the prosecution on Monday, Armouti adds.

“But the premier did not say if the case was submitted to the prosecutor of the state security court or to a normal tribunal.”

After claiming he was put under house arrest on April 3, Hamzah had made extensive use of traditional and social media to lash out against his situation. 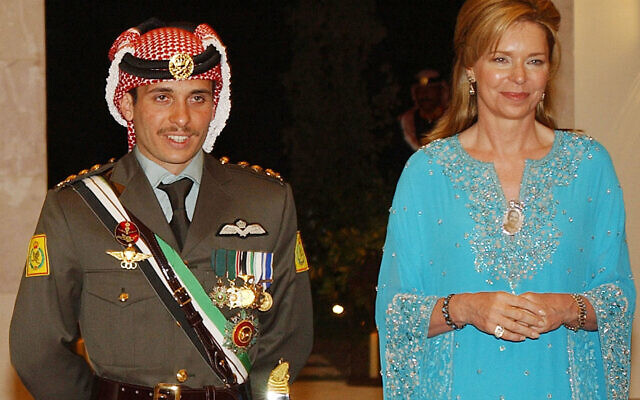 Jordan’s then Crown Prince Hamzah, left, with his mother Queen Noor, right, during his wedding ceremony in Amman, Jordan, May 27, 2004. (Hussein Malla/AP)

He accused Jordan’s rulers of corruption and ineptitude in a video message published by the BBC that same day.

But after a statement voicing his loyalty to the king last week, Abdullah said Hamzah had offered his support for the monarchy and that he was now under his “protection”.

Independent MP Khalil Attiyeh also tells AFP that the prime minister, during his briefing to parliament, “did not use the terms conspiracy or coup d’etat.”

“He denied that there had been a coup but spoke of a bid to destabilize security and stability” in Jordan, Attiyeh says.