Hundreds of thousands of Hindu devotees have gathered by the Ganges river for special prayers, many of them flouting social distancing practices as the coronavirus spreads in India with record speed.

The Kumbh Mela – or pitcher festival, one of the most sacred pilgrimages in Hinduism – runs through April and comes during India’s worst pandemic surge, with a record daily tally of 168,912 COVID-19 infections reported on Monday.

The faithful congregate in the northern city of Haridwar in Uttarakhand state and take a dip in the waters of the Ganges, which they believe will absolve them of their sins and deliver them from the cycle of birth and death.

While the authorities have made virus tests mandatory for those entering the area, officials said they were battling to hold back crowds.

“The crowd here is surging… the police are continuously appealing to people to maintain social distancing,” said police official Sanjay Gunjyal at the site.

“We are continuously appealing to people to follow COVID-19 appropriate behavior. But due to the huge crowd, it is practically not possible.”

Few wore masks as they jostled for a dip in the waters on a day considered auspicious in the Hindu calendar. 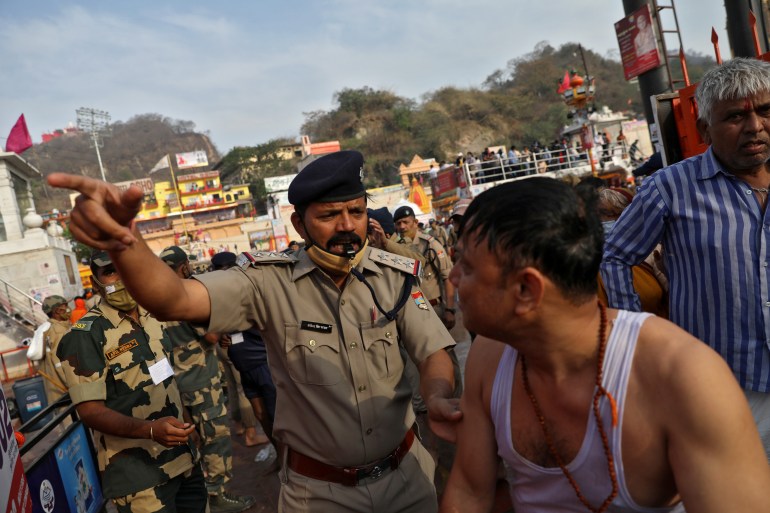 A police officer asks a devotee to leave after he takes a dip in the Ganges during Kumbh Mela [Anushree Fadnavis/Reuters]Authorities in Haridwar say the duration of the festival has been curtailed from previous years but have found it extremely difficult to implement social distancing measures due to the huge gatherings. Coronavirus tests are mandatory for those entering the area.

Uttarakhand has reported 7,323 cases of coronavirus infections and 1,760 deaths from COVID-19 so far.

Amid concerns the Kumbh Mela could turn into a superspreader event, the state’s chief minister, Tirath Singh Rawat, last week said “the faith in God will overcome the fear of the virus”.

Critics of Prime Minister Narendra Modi and his Hindu nationalist Bharatiya Janata Party (BJP) say the festival was allowed at a time when coronavirus cases are skyrocketing because the government wasn’t willing to anger Hindus who are the party’s biggest supporters. 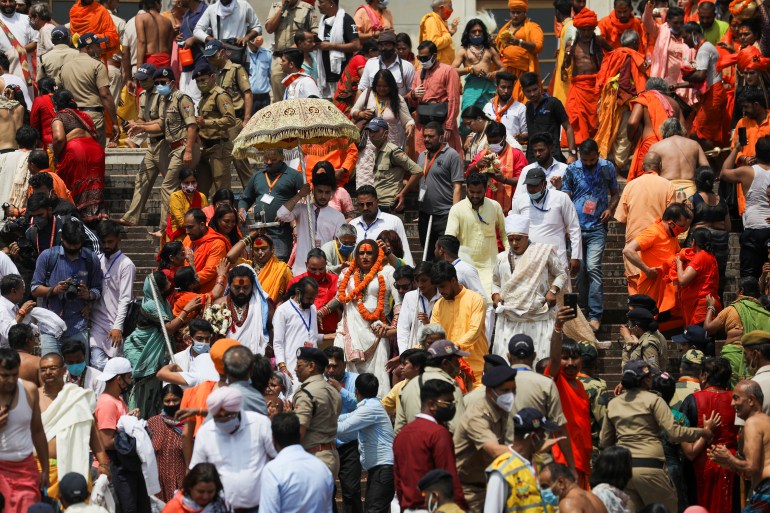 Hindu pilgrims congregate to take a ritual bath in the Ganges river during the Kumbh Mela [Anushree Fadnavis/Reuters]They compare the government’s response to that of last year when Indian Muslimsfaced rising Islamophobiafollowing accusations that an initial surge in infections was tied to a three-day meeting of an Islamic missionary group, the Tablighi Jamaat, in New Delhi.

Some leaders from Modi’s party and India’s freewheeling TV channels, which have long favoured the government’s Hindu nationalist policies, labelled Muslims as “jihadis” and “super spreaders” in March 2020 when the seven-day rolling average of coronavirus cases in the country was not even 200 per day.

The blame triggered a wave of violence, business boycotts and hate speech towards Muslims, who account for 14 percent of India’s 1.35 billion population and are the largest minority group in the Hindu-majority nation.

“With 1.2 million active cases, and the daily number reaching 200,000, it’s bizarre to have poll rallies and a full Kumbh Mela,” political commentator Shekhar Gupta said in a Twitter post.

“This will take the virus deeper into villages and small towns. This is the calamity we dodged with a crippling lockdown in the first wave. Now we’re inviting it back.”

With its explosive surge in recent days, India’s confirmed infections surpassed Brazil’s total on Monday to become the second-worst hit country in the world.

India now accounts for one in every six daily infections worldwide, with a seven-day rolling average of more than 130,000 cases per day.

A death toll of 904 overnight was the highest since October 18, taking the total figure to 170,179, data showed on Monday. Hospitals are becoming overwhelmed with patients, and experts worry the worst is yet to come. 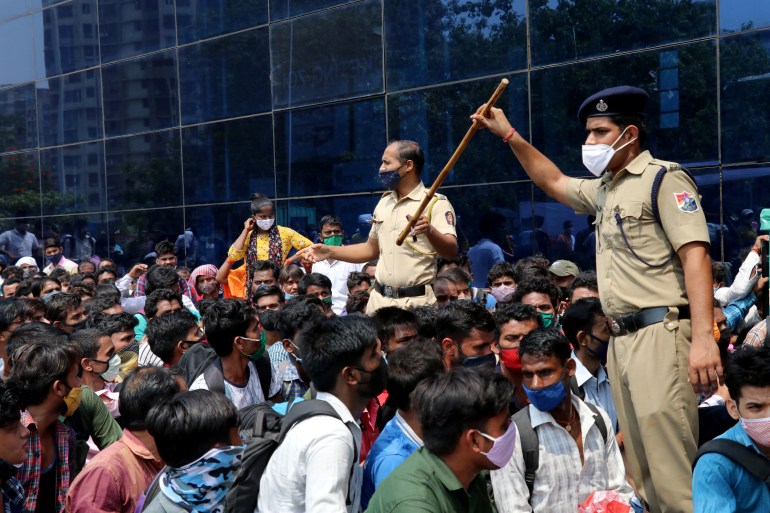 Policemen ask people to sit while waiting to enter the Lokmanya Tilak Terminus railway station in Mumbai [Niharika Kulkarni/Reuters]The western state of Maharashtra, home to financial capital Mumbai, has recorded nearly half of the country’s new infections in the past two weeks.

Officials in the state said they were considering a broader lockdown after large closures over the weekend.

The state, India’s richest and an industrial powerhouse, tallied 63,294 new infections on Sunday, led by a surge in its key cities of Mumbai, Nagpur and Pune.

“It is necessary to break the cycle (of infections),” said a senior state official who attended a meeting with state leaders on Sunday and sought anonymity. “We are working on identifying industries and services that need to be exempted.”

The state is among many that have demanded more doses of vaccines for immunisation campaigns.

India has injected more than 100 million doses since mid-January, the highest figure after the United States and China, but much lower as a share of its population than many countries.

With fewer than 4 percent estimated to have been vaccinated among a population of 1.35 billion, experts say the situation could have a long way to go before it starts getting better.

“After cases declined in January-February, we were very comfortable,” said a panel of high court judges in the western state of Gujarat, calling on authorities to take urgent steps to rein in the outbreak.

“Almost everyone forgot that there was ever corona,” added the panel, headed by Chief Justice Vikram Nath.