Tehran, Iran – The future of diplomatic and financial relations between Iran and South Korea is at stake as Prime Minister Chung Sye-kyun heads to Tehran for three days of talks.

South Korea has for years blocked at least $7bn of Iranian money in its banks as it fears falling afoul of harsh economic sanctions the United States started unilaterally imposing on Iran in 2018.

Iranian officials’ repeated harsh criticism of South Korea and threatening legal action for refusing to release the money has led to no results so far, but the talks are hoped to provide a breakthrough.

Iran was accused of hostage-taking when it seized a South Korean vessel in January for “environmental pollution” in its waters.

Iranian authorities denied the charges and accused South Korea of taking the country’s money hostage, urging them to allow its judiciary to investigate the issue.

The ship, the Hankuk Chemi, was released on Friday along with its captain. 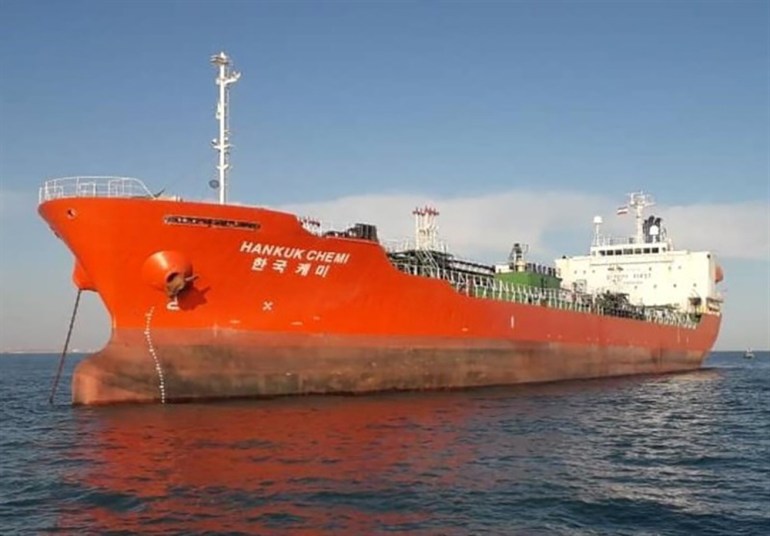 A South Korean-flagged tanker vessel seized by Iran’s IRGC is seen in Gulf waters [File: IRGC/WANA via Reuters]In late February, the governor of the central bank of Iran, Abdolnasser Hemmati, announced after a meeting in Tehran with South Korea’s ambassador, Ryu Jeong-hyun, that Seoul had agreed to release “a part” of the money, which was later said to amount to $1bn.

Reports indicated the money was directed to a Swiss financial humanitarian channel set up towards the end of Donald Trump’s presidency to ensure US sanctions do not affect Iran’s humanitarian trade, but only a single transaction was conducted and it has been inactive during the Joe Biden administration.

It was said to be aimed at buying medical equipment and vaccines as Iran continues to grapple with the deadliest COVID-19 pandemic in the Middle East.

However, South Korea later said the money could only be released if the Office of Foreign Asset Control (OFAC) of the US Treasury Department issues a permit, something that has yet to happen.

The money appears to be closely tied to the fate of the Joint Comprehensive Plan of Action (JCPOA), Iran’s 2015 nuclear deal with world powers that the US unilaterally abandoned in May 2018.

The remaining JCPOA participants – Iran, China, Russia, Germany, France, and the United Kingdom – on Friday concluded the opening week of what they said were “constructive” talks to restore the accord in Vienna.

Representatives from the US were also in town, but in a separate hotel as Iran asserts it will not directly meet American officials until their crushing sanctions are lifted.

Days before the talks began, reports said the US had offered to release $1bn of the Iranian money in South Korea in exchange for Iran stopping its 20 percent enrichment of uranium, an offer that was resoundingly rejected by Tehran.

Prior to US sanctions, South Korean technology giants LG and Samsung had a significant foothold in the Iranian home-appliance market.

But Iranian officials have made a point of stressing that brands that chose to leave the country in light of US sanctions will not be easily allowed back when pressures ease.

When a South Korean delegation led by Vice Foreign Minister Choi Jong-kun was in Tehran in January to discuss the seized vessel, the diplomat was told the country’s brands could expect a tough future in Iran.

“South Korean companies have lost good opportunities in Iran in recent years,” said Kamal Kharazi,  head of the Strategic Council on Foreign Affairs, at the time, adding Tehran has learned to rely on its local manufacturing.

“Even if relations between the two countries are normalised in the future, South Korean companies would have to think about investments, transfer of technical knowledge, and participation in manufacturing rather than selling their goods.”

Earlier this week, the judicial deputy of Iran’s attorney general, Saeed Omrani, said LG and Samsung “abandoned the Iranian people in harsh conditions” and will therefore not be legally allowed to return to the country in the future.