When he heard there were only 70 takers for the 100 vaccine doses that had been sent to Luckau’s hospital to inoculate doctors and medical staff, he called to see if the leftovers could be given to nursery school teachers.

His proposal was sent to Brandenburg’s health ministry. The answer was no. There was a priority list and it had to be adhered to.

“I‘m upset, he told Al Jazeera. “This bureaucracy, there is simply no pragmatism.”

It was not the first time Germany’s inflexible vaccine regulations have caused problems in the historic town, about an hour south of Berlin.

Elderly residents have, for instance, struggled to book appointments on a complicated online platform, only to call a hotline for assistance and find it overloaded.

“I compare it to the flood. A dam breaks and we recognise the situation, but we sit down in our offices and write rules about where to get sandbags and how to fill them,” said Lehmann.

“That’s our problem in Germany: we are no longer able to act. First of all, we need regulations in order to do anything, and that makes life difficult.”

The praise heaped on Germany last year for effectively suppressing COVID-19 infections and maintaining a relatively low rate of deaths compared to its neighbours now sounds like a distant echo.

The country has been in lockdown since November, though restrictions remain looser than in some neighbouring nations.

To date, more than 2.9 million people have been infected with COVID, while at least 77,000 have died with the virus, according to the World Health Organization. 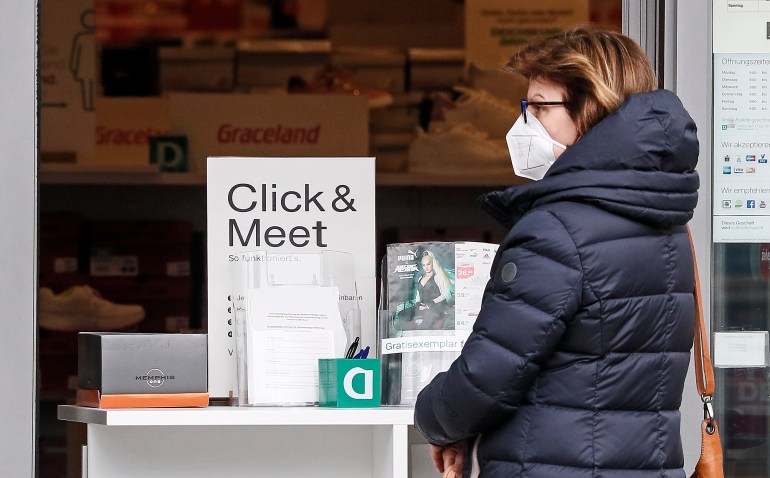 A customer stands in front of a shop that is opened only for registered, limited shopping in Gelsenkirchen, Germany, on Tuesday, April 6, 2021. Politicians are demanding a harder lockdown as Germany faces a third wave of the coronavirus [Martin Meissner/AP]Recently, a third wave of infections has been building, with almost 90 percent of new cases caused by the more transmissible B.1.1.7 strain, known as the Kent or UK variant. The country’s Robert Koch Institute (RKI) has warned it could dwarf the country’s first and second waves.

Around 12 percent of Germany’s population has received at least one jab, according to the latest Our World in Data figures, trailing the United Kingdom, France and EU average.

The vaccination rate dipped slightly further over Easter, as centres in several states shut for the holidays.

Further complicating the rollout is the official response to the embattled AstraZeneca jab. Guidelines have changed several times – it was to be used only for under-65s, then withdrawn entirely over fears of blood clots, then reinstated, and now restricted mostly to the over-60s.

Meanwhile, the state of confusion lingered over the holiday weekend as several German states declined to pull agreed “emergency brakes” in areas with high infection rates, despite sharp criticism from Chancellor Angela Merkel.

The diverging approaches have seen Hamburg and Berlin announce night-time curfews, and Bavaria enforce strict contact rules. However, Saarland, on the French border, is pressing ahead with a plan to reopen theatres, cinemas and outdoor dining with proof of a negative test result.

At the same time, many Protestant and Catholic church officials insisted upon in-person Easter service, and although domestic tourism is banned, more than 500 flights carried tens of thousands of Germans to their poolside deckchairs in Majorca.

Armin Laschet, North Rhine-Westphalia leader and Merkel’s successor as CDU leader, has proposed a “bridge lockdown” of several weeks, but critics have dismissed the plan as vague and insufficient.

“There is a great longing in the population for uniform rules,” Seehofer told newspaper Welt am Sonntag.

“My suggestion is therefore to set the uniform rules through a federal law.”

Just 19 percent of Germans are satisfied with the state and federal governments’ handling of the crisis, according to a recent poll commissioned by broadcaster Tagesschau.

Two-thirds are in favour of tightening lockdown restrictions immediately. 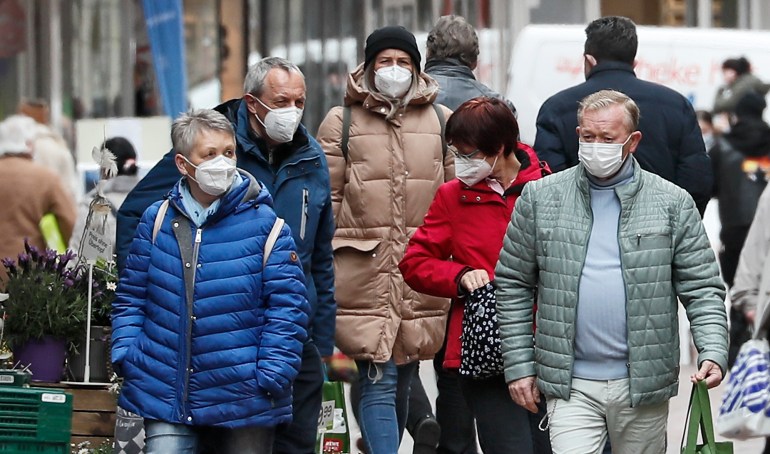 People wear face masks at a shopping street in Gelsenkirchen, Germany [Martin Meissner/AP]“If we would have had a national strategy against this virus, against pandemic, everybody would probably agree really strict measures at the moment would be the right thing,” Green party MP and medical doctor Janosch Dahmen told Al Jazeera.

“It’s rather ineffective if each of the states takes its own way over the Easter holidays. People also don’t understand that they cannot go for a holiday trip within their own territory, but they can fly out to many other countries.”

Every patient received 15 pages of printed documentation, which lawyers insist are read before the jab.

“This is much more work than to vaccinate the people, which lasts a few seconds,” he told Al Jazeera.

“We could in Germany vaccinate the whole population in six weeks, if we had enough. But we don’t because they didn’t buy it,” he said.

Despite broad concerns over the AstraZeneca vaccine, he has found no shortage of willing arms. The refusal rate at his centre remains just two percent.

With a general election in September, Germany’s misfortunes have taken on political significance.

Support for Merkel’s CDU has collapsed to pre-pandemic levels, in part due to a PPE procurement corruption scandal dubbed the “mask affair”.

A Green-led coalition with the Social Democrats and either Liberal or Left parties is now a possibility.

“We saw an increase in trust in government in Germany at the beginning of the pandemic, when people realised we need governments to act decisively,” said Arndt Leininger, a political scientist at the Technical University of Chemnitz.

“Now it seems less able to do so and the governing party with the chancellorship is the CDU.”

There are some signs that Germany’s vaccination campaign might finally be ready for takeoff.

This week GPs begin vaccinating their patients, which health minister Jens Spahn called a “not huge, but important step”.

Some 940,000 doses will be available to 35,000 medical practices next week, ramping up to three million by the end of April.

One of the largest vaccine facilities in the world, it has an annual production capacity of one billion doses.

And supply will also be helped as Germany expects to receive 15 million more doses from AstraZeneca in the second quarter and 40 million from BioNTech.

Government and medical officials still believe the country can catch up and reach the EU goal of having 70 percent of adults vaccinated within months, a level believed to support herd immunity.

But almost two-thirds of the public, according to a YouGov poll, are not so sure. 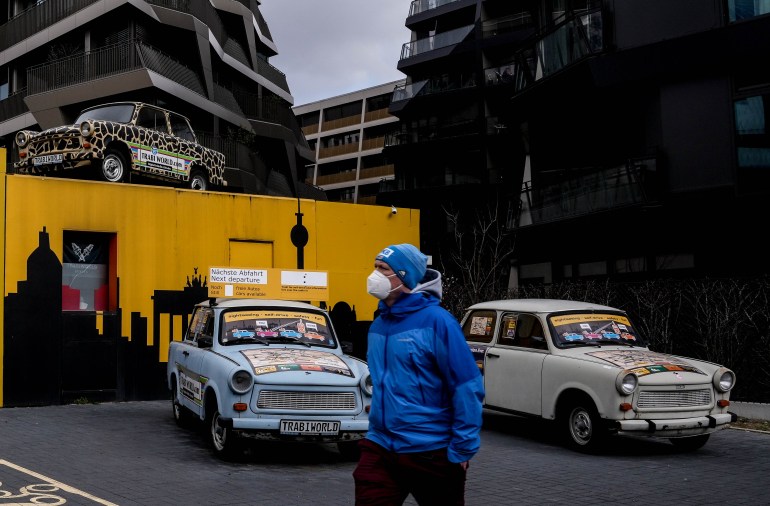 The streets of Berlin seem to be significantly less busy than in pre-coronavirus times [Filip Singer/EPA-EFE]Influential Social Democrat MP and epidemiologist Karl Lauterbach called on Germany’s vaccine regulator to show more flexibility and follow the UK’s lead in extending the gap between doses, which he believes could see every willing person receive a first dose by the end of June.

“If we change our strategy now and focus on as many first vaccinations as possible, a fourth lockdown will no longer be necessary,” he said.