When Donald Trump and his allies pushed the “big lie” of voter fraud and a stolen election, it seemed nothing could stop them spreading disinformation with impunity.

But now a little-known tech company, founded 18 years ago in Canada, has the conspiracy theorists running scared. The key: suing them for defamation, potentially for billions of dollars.

“Libel laws may prove to be a very old mechanism to deal with a very new phenomenon of massive disinformation,” said Bob Shrum, a Democratic strategist. “We have all these fact checkers but lots of people don’t care. Nothing else seems to work, so maybe this will.”

The David in this David and Goliath story is Dominion Voting Systems, an election machine company named after Canada’s Dominion Elections Act of 1920. Its main offices are in Toronto and Denver and it describes itself as the leading supplier of US election technology. It says it serves more than 40% of American voters, with customers in 28 states.

But the 2020 election put a target on its back. As the White House slipped away and Trump desperately pushed groundless claims of voter fraud, his lawyers and cheerleaders falsely alleged Dominion had rigged the polls in favour of Joe Biden.

Among the more baroque conspiracy theories was that Dominion changed votes through algorithms in its voting machines that were created in Venezuela to rig elections for the late dictator Hugo Chávez.

The truth matters. Lies have consequences

It was laughable but also potentially devastating to Dominion’s reputation and ruinous to its business. It also fed a cocktail of conspiracy theories that fuelled Trump supporters who stormed the US Capitol on 6 January, as Congress moved to certify the election results. Five people died, including an officer of the Capitol police.

The company is fighting back. It filed $1.3bn defamation lawsuits against Trump lawyers Rudy Giuliani and Sidney Powell, and MyPillow chief executive Mike Lindell, for pushing the allegations without evidence.

Separately, Dominion’s security director, Eric Coomer, launched a suit against the Trump campaign, Giuliani, Powell and some conservative media figures and outlets, saying he had been forced into hiding by death threats.

Then came the big one. Last month Dominion filed a $1.6bn defamation suit against Rupert Murdoch’s Fox News, accusing it of trying to boost ratings by amplifying the bogus claims.

“The truth matters,” Dominion’s lawyers wrote in the complaint. “Lies have consequences. Fox sold a false story of election fraud in order to serve its own commercial purposes, severely injuring Dominion in the process. If this case does not rise to the level of defamation by a broadcaster, then nothing does.”

The suit argues that Fox hosts and guests “took a small flame and turned it into a forest fire” by broadcasting wild assertions that Dominion systems changed votes and ignoring repeated efforts by the company to set the record straight.

“Radioactive falsehoods” spread by Fox News will cost Dominion $600m over the next eight years, according to the lawsuit, and have resulted in Dominion employees being harassed and the company losing major contracts in Georgia and Louisiana.

Fox fiercely disputes the charge. It said in a statement: “Fox News Media is proud of our 2020 election coverage, which stands in the highest tradition of American journalism, and will vigorously defend against this baseless lawsuit in court.”

Other conservative outlets have also raised objections. Chris Ruddy, chief executive of Newsmax, said: “We think all of these suits are an infringement on press freedom as it relates to media organisations. There were the years of Russian collusion investigations when all of the major cable networks reported unsubstantiated claims. I think Fox was reporting the news and certainly Newsmax was.”

But some observers believe Dominion has a strong case. Norman Eisen, a senior fellow at the Brookings Institution, said: “Dominion has an outstanding prospect in its litigation against Fox for the simple reason that Fox knowingly broadcast over and over again the most outrageous and clear lies.

“Certainly there are protections under the first amendment and otherwise but this is so far outside the bounds, such a clear case, that I think Fox is looking at a very serious legal exposure here and that’s the way it should be.

“You should not have a major television outlet that is able day after day to provide a megaphone for outrageous falsehoods having to do with the election, one that helped trigger a violent insurrection on 6 January. They should not be able to feed a steady stream of those pernicious lies into the body politic without any legal consequences.”

Eisen, a former White House “ethics czar”, suggests that the Dominion case could provide at least one model for dealing with the war on truth.

“The United States and the world need to deal with disinformation,” he said.

“There can be no doubt that every method is going to be required but certainly libel law provides one very important vehicle for establishing consequences and while there’s no such thing as a guarantee when you go to court, this is an exceptionally high risk for Fox with a large price tag attached as well.”

There are signs that the legal actions, and their grave financial implications, have got reckless individuals and outlets on the run. 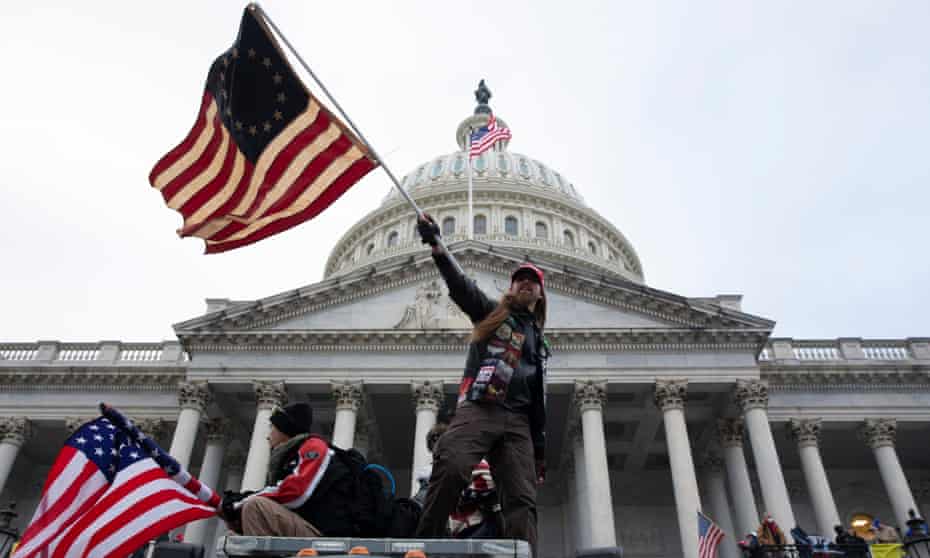 Powell asked a judge to throw out the lawsuit against her, arguing that her assertions were protected by the right to free speech. But she also offered the unusual defence that she had been exaggerating to make a point and that “reasonable people would not accept such statements as fact but view them only as claims that await testing by the courts through the adversary process”.

Meanwhile pro-Trump outlets have begun using prepared disclaimers or prerecorded programmes to counter election conspiracy theories spouted by guests. When Lindell launched into an attack on Dominion on Newsmax in February, co-anchor Bob Sellers tried to cut him off and then walked off set.

RonNell Andersen Jones, a law professor at the University of Utah, told the Washington Post: “We are seeing the way that libel has become a real battleground in the fight against disinformation.

“The threat of massive damages for spreading probably false conspiracy theories on matters of public concern could turn out to be the one tool that is successful in disincentivising that behaviour, where so many other tools seem to have failed.”

The defamation suits will provide another test of the judiciary as a pillar of American democracy. The courts’ independence proved robust regarding dozens of lawsuits by Trump and his allies seeking to overturn the election outcome.

Larry Jacobs, director of the Center for the Study of Politics and Governance at the University of Minnesota, said: “It is such an under-appreciated illumination of the multiple avenues for pursuing politics. Sometimes we get understandably absorbed by what Congress can do, which is obviously significant at times, but mostly fairly kind of deadlocked.

“But we’re going to see the legal system prosecuting the 6 January perpetrators, prosecuting Donald Trump and prosecuting these libel charges by Dominion over the monstrous lies that were told after the election.

“Thank goodness for the courts because the elected branches have really botched it.”