A British-Australian academic imprisoned by Iran on false charges of spying for Israel said Saturday that since her release, she has suffered a campaign of abuse by an academic who was fired by Sydney University in 2019 after he showed students a picture of a swastika superimposed on the Israeli flag.

Tim Anderson was also convicted of ordering the 1978 Sydney Hilton Hotel bombing, but later acquitted. Three people were killed and 11 injured in the attack.

Kylie Moore-Gilbert, 33, returned to Australia in December after serving 804 days of a 10-year sentence. She was freed in exchange for the release of three Iranians who were held in Thailand.

Moore-Gilbert told The Australian newspaper that she has suffered online abuse from Anderson, who in February called her an “Israeli zealot,” and claimed she had “military and leadership training in Israel.” 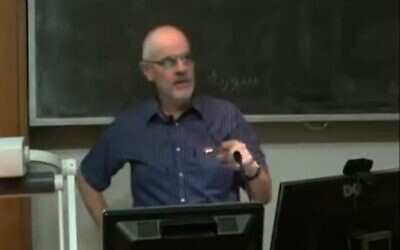 Anderson, who has frequently expounded pro-Syrian regime views, and according to the Daily Mail has met with Bashar Assad on a number of occasion, also said Moore-Gilbert spied on the Iranian nuclear program and helped with the organization of “repeated terrorist murders.”

Moore-Gilbert told The Australian that Anderson was “a mouthpiece for these regimes.”

“It’s not just him; there’s quite a few useful idiots in Western countries who are happy to do a deal with these guys,” she said. “I honestly don’t see any logical explanation for his fixation on me, that months after my release he’s still tweeting about me the same propagandistic stuff that was released by the regime.”

Responding to the claims, Anderson told the newspaper that he tweeted about Gilbert-Moore “because the corporate media, including The Aust­ralian, have been making this false argument there was no evidence about her being recruited by Israel — that’s not true at all.”

“Iran has posted a substantial video which has been posted on a number of sites, citing the evidence about her receiving military and leadership training in Israel,” Anderson said, citing a conspiracy theory with no evidence for the claim.

Moore-Gilbert, a Melbourne University lecturer on Middle Eastern studies, was held after the discovery that she had an Israeli husband led to Iranian authorities stopping her at Tehran’s airport as she prepared to leave the country in 2018 after attending an academic conference. 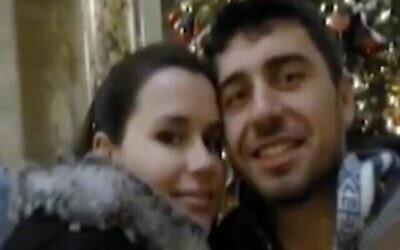 Authorities sentenced her to 10 years in prison for espionage for Israel and sent her to Tehran’s notorious Evin prison. She vehemently denied the charges and maintained her innocence.

In a letter from Moore-Gilbert to the Australian prime minister, smuggled out of Evin prison in Iran in late 2019, the imprisoned academic revealed how Iran’s Islamic Revolution Guard Corps attempted to set a trap for her Russian-Israeli husband Ruslan Hodorov.

“The Revolutionary Guard have imprisoned me in these terrible conditions for over nine months in order to extort me both personally and my government,” Moore-Gilbert wrote to Prime Minister Scott Morrison.

“They have also attempted to use me as a hostage in a diabolical plot to lure my husband, an Australian permanent resident into joining me in an Iranian prison,” she wrote. 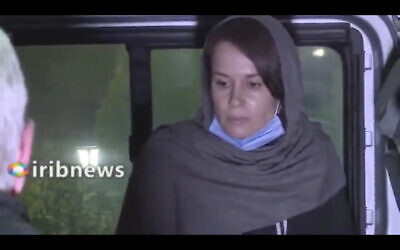 Moore-Gilbert married Hodorov in a Jewish ceremony in 2017, though, since her return to Australia, she is seeking divorce over his alleged affair with a close colleague of hers, the Herald Sun reported.

Moore-Gilbert said in a television interview broadcast last month that she endured “psychological torture” during her more than two years behind bars.

“It’s an extreme solitary confinement room designed to break you. It’s psychological torture. You go completely insane. It is so damaging. I would say I felt physical pain from the psychological trauma I had in that room. It’s a 2-meter by 2-meter box,” Moore-Gilbert told Sky News.

“There were a few times in that early period that I felt broken. I felt if I had to endure another day of this, you know, if I could I’d just kill myself. But of course, I never tried and I never took that step,” she added.

Agencies contributed to this report.