The death of incumbent Congressman Ron Wright from COVID-19 in February opened up Texas’ 6th Congressional District to a wide-ranging field of 23 candidates competing in the May 1 special election for the vacant seat.

Given the crowded field, it is unlikely that a candidate will tally over 50% of the vote in this open contest, meaning that the top two finishers will advance to a runoff.

Wood said President Joe Biden was wrong to cancel the Keystone XL pipeline because it will cost jobs for American workers. On immigration, he says he is open to a points system in which potential immigrants are assessed on skills, work experience and education. Wood opposes a large-scale guest-worker program and thinks the Congress must move toward comprehensive immigration reform in increments beginning with securing the border and securing the legal status of the thousands of immigrants who were brought illegally into the country as children years ago. But his position on the border wall is harder-edged than we prefer.

However, Wood’s ability to look introspectively at the Republican Party is important. He says the party has lost its way and needs renewal. He says the party was once built on a foundation of conservative ideas, but now has become “a cult of personality.”

Wood, who describes himself as a conservative Republican, voted for former President Donald Trump last year because Trump appointed conservatives to judicial posts and achieved tax cuts. However, Wood said Trump’s actions after November’s election, including the former president’s role in getting protesters to march on the Capitol and rhetoric about widespread election fraud in the presidential election, prompted him to run for office after Wright’s death.

Wood said Republicans must be willing to speak the truth about what ails the GOP or risk ceding the House and Senate to Democratic majorities for a generation. He said the GOP must move beyond Trump and conspiracy theories, including the lie that Democrats stole the 2020 presidential election.

Asked why he is not running as a Democrat or independent, given his concerns about the party’s direction, Wood said, “I want to save this party. ” Wood said the party has had a “rich and noble history” and that he wants it to have a “rich and noble future.” In an interview earlier this year, Wood said a win in this race hopefully would empower Republican candidates. “Now is the time for the good of everything that we care about to move past [Trump],” Wood said.

As an Editorial Board, we don’t see eye to eye with Wood on all points, including some aspects of his immigration stance, but think Wood represents a bridge to the GOP regaining its focus. And though he is relatively unknown in the district, a GOP stronghold that includes Ellis and Navarro counties and a portion of Tarrant County that Trump won against Biden, we think Wood could help the party find its core conservative principles. 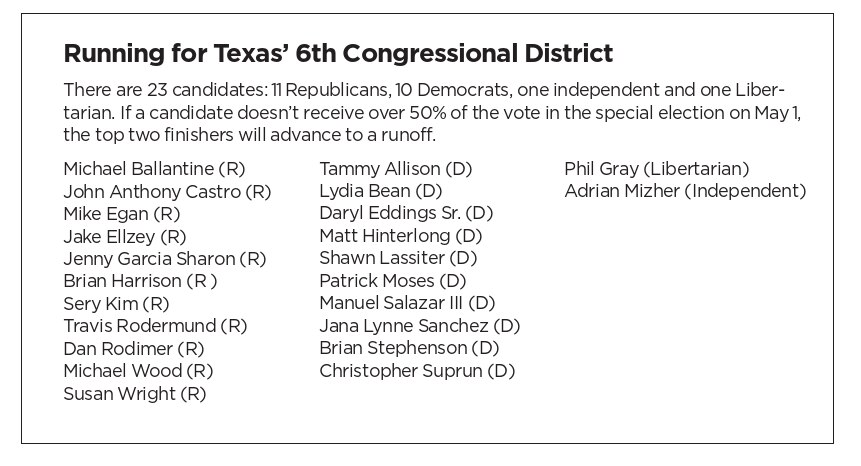 Got an opinion about this issue? Send a letter to the editor, and you just might get published.