As you’ve undoubtedly noticed, the current political environment is super partisan and polarized. We are in the midst of an unprecedented run of close, competitive elections, and Democrats and Republicans are about as far apart ideologically as they’ve ever been. Many of them also feel a strong antipathy toward each other, to the point that most believe the other side fundamentally differs not just in its priorities but in its core values, too.

As a result, few voters split their tickets in November. That is, if you voted for one party for president, you probably voted for the same party up and down the ballot. Take how voters cast their ballots in the U.S. House elections, the only other national election in 2020 aside from the presidential election (the presidential race is on the ballot everywhere, as are all 435 House seats).1 Just 16 out of 435 districts backed a presidential nominee from one party and a House candidate from the other party, according to district-level voting data compiled by Daily Kos Elections. That translates to just 4 percent of districts “splitting” their tickets in 2020, the smallest share in the past 70 years. 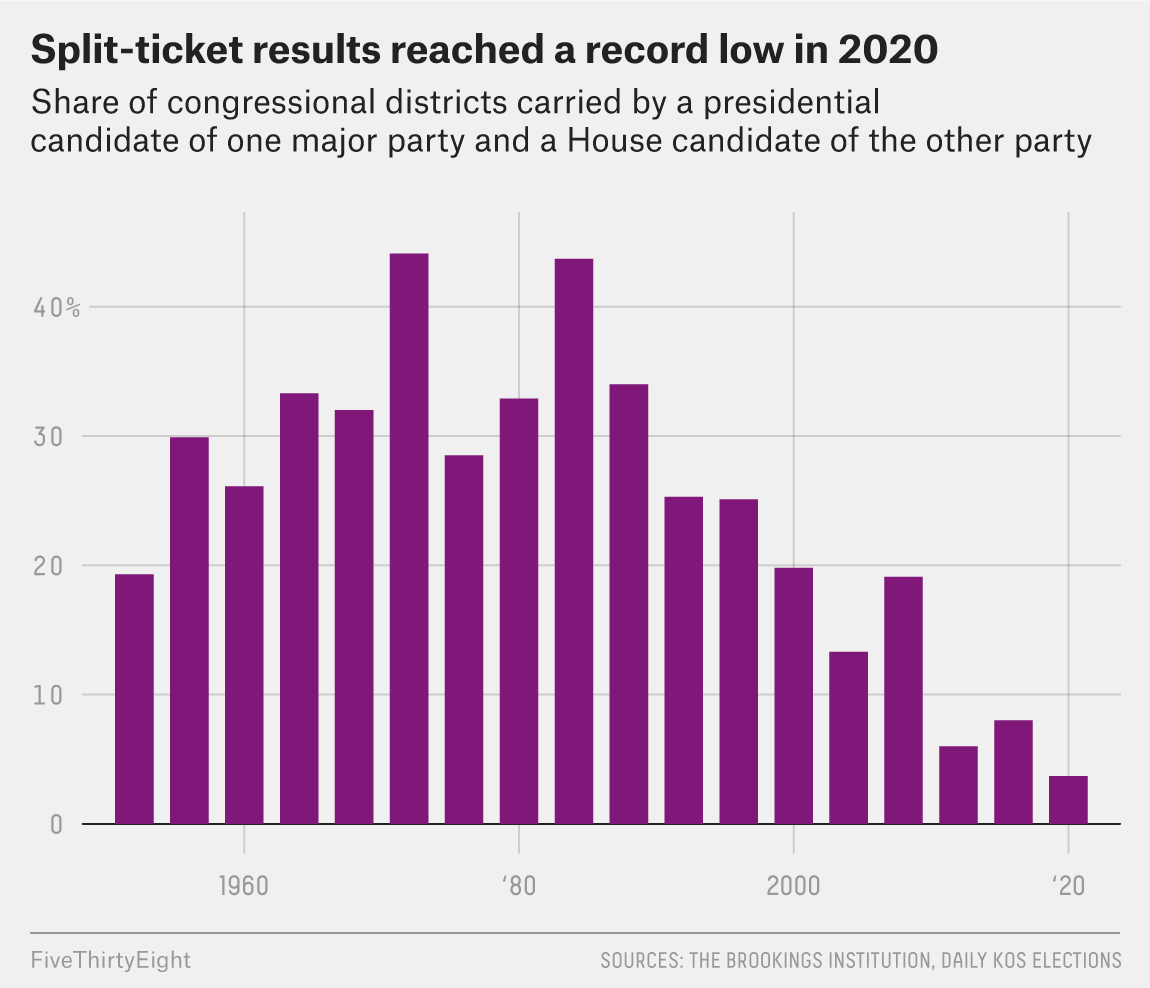 That number is stark, and speaks to how deeply entrenched partisanship is in our elections, but as the chart above shows, this cycle isn’t the first time this has been the case. Over the past 20 years, the share of districts splitting their House and presidential results between the two major parties has consistently fallen below 20 percent, and 2020 was the third consecutive cycle it fell below 10 percent. This represents a sea change from much of the latter half of the 20th century, when all but one cycle (1952) topped 20 percent. In fact, we’d have to go back to the start of the 20th century to find a similar period with such a small share of crossover seats — between 1900 and 1908.2

What is fueling this bevy of straight-ticket outcomes is a sharp increase in the one-to-one relationship between presidential and House voting. Charles Franklin, director of the Marquette Law School Poll, recently observed that the correlation between the presidential and House vote margin in each district was far greater in 2020 than in 2000, just two decades prior. Based on Franklin’s calculations, the 2020 presidential vote explained more than 85 percent of the variation in the House vote last November, whereas it explained only about 30 percent of the variation in 2000.

Now, this doesn’t mean that the few districts that did split their outcomes in 2020 weren’t important; rather, they were illustrative of why the Democrats ended up with a narrow majority in the House. That’s because in these 16 districts, the GOP did slightly better than the Democrats overall, and not just because Republicans won nine of these districts compared with the Democrats’ seven. The GOP also notably won the four closest races in these districts and carried six of the seven seats with the largest gap between the House and presidential vote. In fact, of the 14 House seats that the GOP flipped in 2020,3 four of them were from these 16 “crossover” districts.

i Incumbent in November 2020

The GOP’s slight edge in these crossover seats is significant, as it continues a recent pattern in presidential contests of Republicans winning more districts with split outcomes. (Democrats previously held this advantage, from 2000 to 2008, but in 2010 they lost many seats in the South that had long been in their hands despite voters’ leaning toward the GOP at the presidential level.) However, while the GOP may have done somewhat better in the crossover seats in 2020, they still proved to be pivotal to the Democrats’ majority: The Democrats now hold 222 seats overall,4 and that’s in large part thanks to these seats. If they’d lost five or more of these split-ticket seats, Republicans would have gained control. In total, the average gap between the presidential and House margins in the 16 crossover seats was about 9.2 points, while the average difference in the remaining House seats was 4.4 points,5 indicative of just how close the presidential and House races ran together.

And that close alignment will likely be the reality moving forward. Even if the number of crossover seats increases in 2024, it would take a dramatic shift in our politics for enough voters to split their tickets to produce a lot of Democratic House members in seats carried by the GOP presidential nominee or vice versa. Now more than ever, these split-ticket outcomes are the exception, not the rule.