How Ben Simmons is making a leap

N.B.A. Investigating After Jeremy Lin Said He Was Called ‘Coronavirus’

Who Are Iran-backed Militants Struck by US in Syria?

Fact check: CPAC speakers make false claims about the election, the Capitol attack and The Muppets

Donald Trump will be making his first post-presidential appearance at a conservative gathering in Florida next weekend where he plans to tell Republicans that he is their “presumptive 2024 nominee” for president, according to a Monday report by Axios.

Ian Walters, the spokesman for the American Conservative Union, confirmed that Trump will be speaking at the group’s annual Conservative Political Action Conference on February 28.

An unnamed longtime adviser told Axios that Trump’s upcoming speech will be a “show of force,” and the message will be: “I may not have Twitter or the Oval Office, but I’m still in charge.”

Trump is also expected to use the speech to talk about the future of the Republican Party and the conservative moment, as well as to criticize US President Joe Biden’s efforts to undo his immigration policies, according to a person who spoke on condition of anonymity to discuss the plans. 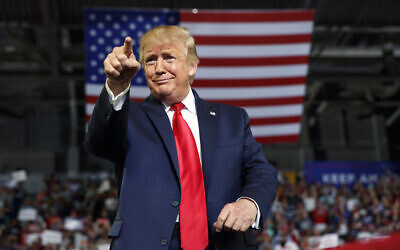 Then-US president Donald Trump gestures to the crowd as he arrives to speak at a campaign rally at Williams Arena in Greenville, North Carolina, July 17, 2019. (AP Photo/Carolyn Kaster, File)

CPAC is being held this year in Orlando, Florida, and will feature a slew of former Trump administration officials and others who represent his wing of the GOP, including former Secretary of State Mike Pompeo, Florida Gov. Ron DeSantis, and South Dakota Governor Kristi Noem.

Trump has been keeping a relatively low profile since he retired from the White House to Palm Beach, Florida, in January, but reemerged last week to conduct a series of phone-in interviews to commemorate the death of conservative commentator Rush Limbaugh.

Trump has a long history with CPAC, which played a key role in his emergence as a political force.

Arkansas Governor Asa Hutchinson said Sunday he will not back Trump if the former president runs for the White House in 2024, saying “it’s time” to move on to different voices in the Republican Party. 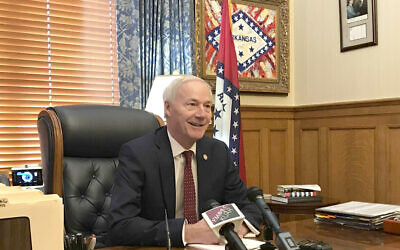 Arkansas Gov. Asa Hutchinson talks to reporters at the state Capitol in Little Rock, Arkansas, May 22, 2019 about the 15 cabinet secretaries he’s named under a government reorganization plan. (AP Photo/Andrew DeMillo)

“No, I wouldn’t,” Hutchinson said when asked on CNN’s “State of the Union” whether he would ever support Trump again. “He’s going to have a voice, as former presidents do. But there’s many voices in the party.”

Trump “should not define our future. We have got to define it for ourself,” the Republican governor added.

Hutchinson had said after the January 6 riot at the US Capitol, which led to Trump’s impeachment by the House, that he wanted Trump’s administration to end. But Hutchinson did not join calls for Trump to resign and said impeachment wasn’t a practical option. The Senate acquitted Trump of inciting the attack.

Hutchinson’s interview aired days after his nephew, Arkansas state Senator Jim Hendren, announced that he’s leaving the GOP, citing Trump’s rhetoric and the riot at the Capitol by Trump’s supporters. Trump had stoked a campaign of spreading debunked conspiracy theories and false violent rhetoric that the 2020 election was stolen from him in the weeks before the insurrection.

On Sunday, Hutchinson praised Trump’s family, including Trump’s daughter Ivanka, and said he also respected his nephew’s decision to continue his political career as an independent. But Hutchinson said the Republican Party will have a “good future” if it sticks to core conservative principles rather than “personalities.” He said the GOP will need to work in particular on galvanizing certain segments of voters as Trump did, such as blue-collar workers.

“I have worked with Ivanka and others, and they love America. But I would not support him,” Hutchinson said. 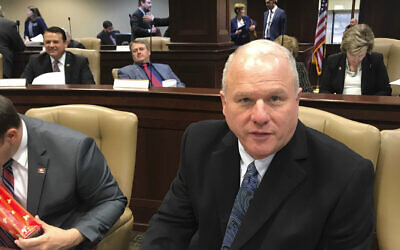 Hendren had been considering a run for governor next year because Hutchinson is term-limited, but Hendren’s decision to leave the party keeps him out of a GOP primary that will include Trump’s former White House press secretary, Sarah Sanders.

Sanders, the daughter of former Governor Mike Huckabee, has indicated she would lean heavily on Trump and his rhetoric, with an announcement video pledging to fight the “radical left.”

If Trump chooses to run for the White House in 2024, opponents are likely to call on a constitutional provision adopted after the Civil War to try to stop him. The Supreme Court could have the final say.

The Constitution’s 14th Amendment disqualifies from future office any former elected officials and military officers who “shall have engaged in insurrection or rebellion” against the United States. Ratified in 1868, the language in Section 3 of the amendment was aimed at former Confederate civilian and military leaders. 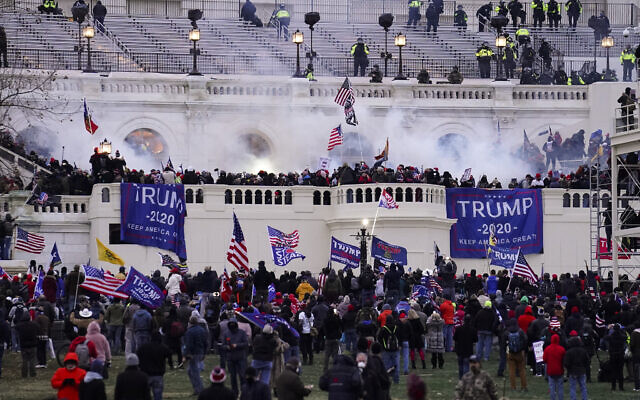 Violent protesters, loyal to President Donald Trump, storm the Capitol, Wednesday, Jan. 6, 2021, in Washington. It’s been a stunning day as a number of lawmakers and then the mob of protesters tried to overturn America’s presidential election, undercut the nation’s democracy and keep Democrat Joe Biden from replacing Trump in the White House. (AP Photo/John Minchillo)

It could be applied to people who incited or took part in the January 6 attack on the Capitol, legal scholars said, noting that a congressional commission to investigate the attack and lawsuits against Trump could help make clearer his role in the deadly insurrection that day.

“If Trump runs again in 2024, I think it’s very likely that we’ll see efforts to keep him off the ballot on Fourteenth Amendment grounds,” Daniel Hemel, a University of Chicago law professor, wrote in an email.

But there is a lot of uncertainty about how it might happen and whether Congress or just state officials would be involved.

As The Times of Israel’s environment reporter, I try to convey the facts and science behind climate change and environmental degradation, to explain – and critique – the official policies affecting our future, and to describe Israeli technologies that can form part of the solution.

I am passionate about the natural world and disheartened by the dismal lack of awareness to environmental issues shown by most of the public and politicians in Israel.

I’m proud to be doing my part to keep The Times of Israel’s readers properly informed about this vital subject.

Your support, through membership in The Times of Israel Community, enables us to continue our important work. Would you join our Community today?