The cases had been brought by Republican leaders in Pennsylvania’s legislature and former President Donald Trump, among others, ahead of the Nov. 3 election. They challenged a decision from the Pennsylvania Supreme Court to allow counties to accept mail ballots postmarked by Election Day up to three days later.

The court handed down its decision not to consider the suits Monday. The justices in the majority did not release a rationale for the move, though those in the minority did file dissents.

Justice Clarence Thomas argued not making a decision to clarify the law was a mistake.

“If state officials have the authority they have claimed, we need to make it clear. If not, we need to put an end to this practice now before the consequences become catastrophic,” Thomas wrote. 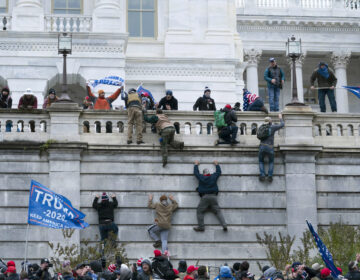 These are the 94 elected officials from Pa. who supported challenges to Biden’s win

Several major corporations are stopping donations to lawmakers on this list, which includes eight congressional reps and 85 state reps.

The Pennsylvania Supreme Court granted the three-day deadline extension during the tumultuous lead-up to the election.

A perfect storm of potential problems had been brewing: an expansion to Pennsylvania’s mail voting law coupled with the raging pandemic making people reluctant to vote in person meant that there would be record numbers of mail ballots. At the same time, the postal service was experiencing severe, widespread delays.

Democrats cheered the state court’s decision to grant a three-day extension due to those issues. But Republicans pushed back, saying the court — which is controlled by Democrats — was overstepping its authority.

Ahead of the election, the U.S. Supreme Court voted not to put a stay on the state court’s decision, handing down a split, four-to-four decision in the days after liberal Justice Ruth Bader Ginsburg died, but before the conservative Amy Coney-Barrett took her place.

Republicans continued filing challenges as the election got closer. The court struck another one down because it had been filed too close to the election, but left open the possibility that it might issue a different ruling after Nov. 3.

Republican U.S. Rep. Mike Kelly (PA-16) — who spearheaded one of the lawsuits and has been a vocal Trump supporter and opponent of Pennsylvania’s expanded mail ballot law, Act 77 — released a statement calling the court’s decision not to take up the case “astounding.”

“I call on the governor and the General Assembly to do the right thing by repealing the no-excuse mail-in voting system, starting the constitutional amendment process, and letting Pennsylvania voters decide the issue,” he wrote.

Republicans have been under considerable pressure from Trump-supporting constituents to repeal Act 77 and significantly curtail mail voting in Pennsylvania.

The law passed in 2019 with bipartisan support after being spearheaded by Republicans. Democratic Gov. Tom Wolf has said he won’t support any effort to limit mail voting rules.

State Attorney General Josh Shapiro noted the decision on Twitter and added, “Pennsylvania had a free and fair election in 2020. Hoping these SCOTUS denials close the book on this for good. Time for everyone to move on.”