How Ben Simmons is making a leap

N.B.A. Investigating After Jeremy Lin Said He Was Called ‘Coronavirus’

Who Are Iran-backed Militants Struck by US in Syria?

Fact check: CPAC speakers make false claims about the election, the Capitol attack and The Muppets

It is realistic to assume that the lowered salary cap for 2021 will greatly affect franchise tag utilization throughout the league. A large chunk of cash devoted to a single player for just the 2021 league year doesn’t make a ton of sense when teams could take advantage of the depressed free agent market this year and spread out a larger percentage of cash owed to later years when they’ll have more money to spend.

That said, some teams will simply be in a pickle of their own making. While even the best general manager couldn’t anticipate a global pandemic squeezing revenue, some teams find themselves in this position more often than not.

For 13 teams, whether because of their specific rosters or the financial ramifications mentioned above, there just don’t seem to be any great options. Those teams are: the 49ers, Browns, Chiefs, Colts, Dolphins, Eagles, Falcons, Patriots, Raiders, Steelers, Titans and Vikings. As for the rest of the league, here’s a team-by-team look at who could get tagged when the franchise window opens Tuesday at 4 p.m. ET. 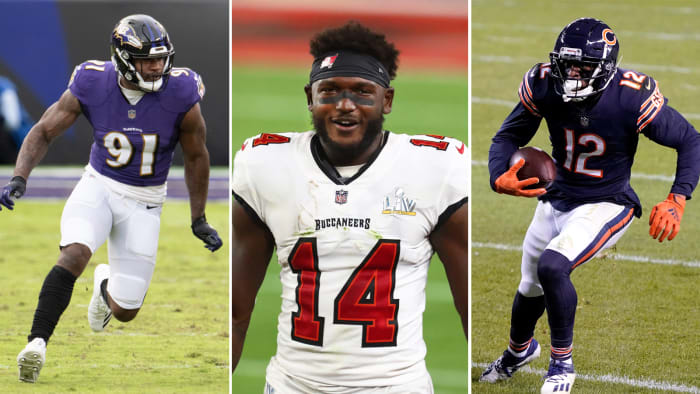 • Haason Reddick was mentioned by Pro Football Focus as a potential outside candidate, which I like. Reddick compiled 7.5 sacks over his final four games last season and is the kind of player who causes his former team to pause just long enough to tag him before hitting free agency. If the Cardinals truly want to build a young, dynamic defense built on position-less capable players like Reddick and Isaiah Simmons, then they should pony up for another full year of experimentation.

Would you spend $20 million for Judon next year and tag him twice in a row? Probably not. If you’re Baltimore and you have some wiggle room under the cap and there isn’t a better long-term solution, would you at least poke around at the idea? Why not? I don’t hate the idea, floated by CBS. The Ravens have used the franchise tag in back-to-back seasons before, with Terrell Suggs. Judon is not Suggs, but the precedent is there.

Baltimore’s acquisition of Ngakoue reflected its need for more of a presence on the edge. Ngakoue had three QB hits over nine games in Baltimore but is still a premium talent and would be cheaper than tagging Judon a second time.

If you’re the Bills do you chance an offensive tackle market that could get strange with all the QB movement this offseason?

Moton is great. He’d be highly sought after in free agency and it would be ludicrous for the Panthers to let him walk, especially given how aggressive they’ve been in the QB market.

The Bears’ power circle needs to win this year in order to remain. That means they will be aggressive in going after a new quarterback. That means said new quarterback will need a great wide receiver. Hence the complicated situation we find ourselves in with Allen Robinson. A tag on Robinson triggers a 120% raise, which puts him at almost $18 million for 2021. There’s a good chance he could get more on the open market. He has already asked for a trade in Chicago and made it clear that sticking around for another year of turnover would be against his best interests. Should Chicago hit him with the tag, we could be in for a lengthy staredown.

The Tape has been watched, as Lawson himself claimed. While he could end up being a wonderful consolation prize to a smart team in free agency, Cincinnati may jump at that chance. The Great Paul Dehner in Cincinnati calls it unlikely, but could the Bengals get desperate if free agency doesn’t break their way?

Dallas has allowed its situation to reach this unenviable point, the Kirk Cousins staredown, if you will. Prescott knows that by continuing his strong play, injury aside, he can continuously raise the salary floor on a long-term deal. The Cowboys also know that, barring a truly seismic shift in the QB market, they are not going to land anyone better. It would be advantageous of Jerry Jones to wheel out a shiny new deal for Prescott before the tag window opens, but we’ve been saying a version of this for two years now.

• As The Denver Post noted this week, it appears likely the Broncos will again tag Justin Simmons, arguably their most valuable defensive player, after doing so a year ago. Even with the 120% raise, Simmons is still below the $14 million APY earned by the NFL’s top-paid safety, Landon Collins. It feels like a no-brainer for Denver, which is going into year three of the Vic Fangio regime. Simmons turns 28 next season and is indispensable to Fangio. If Denver decides to change coaches after this season, it has some flexibility.

The Lions are clearly rebuilding, but once they get done carving out some veteran contracts and get themselves under the cap, it probably makes sense to tag Golladay and keep him from free agency. Putting Jared Goff behind center without Golladay burns any kind of fair evaluation Detroit would be able to make on its new quarterback.

The Packers don’t use the franchise tag, but keeping Jones for a year in his athletic prime at roughly $8 million makes some sense. Yes, they drafted for his planned ouster, but they could turn this budget squeeze into an additional year of high-powered offensive football.

This feels like a stretch, but when you’re the Texans literally anything is possible, including using the franchise tag to keep players from clawing their way out of this disaster.

The Weak-Side Podcast now has its own feed! Subscribe to listen to Conor Orr and Jenny Vrentas every week.

It would be surprising to see Urban Meyer let go of an adequate left tackle when he plans on selecting Trevor Lawrence with the No. 1 pick, unless there is a solid backup plan we are unaware of.

Another probable no, but we don’t know how much Brandon Staley values the position and a second straight tag on Henry in a rising positional market still costs less than the top tight end deal at the moment (George Kittle’s $15 million APY). The Orange County Register recently quoted Henry as saying he had a good chance of remaining in L.A.

If you’re as all-in on 2021 as Les Snead is, can you afford to lose quite possibly the top safety of 2020? There is $30 million worth of dead money to account for (according to Over The Cap) and perhaps the calculus with Matt Stafford involves you planning to outscore opponents more than hold them scoreless, which will be harder to do without last year’s DC, Staley.

Seeing the Saints manage to squeeze a Drew Brees replacement and a premier pass-rushing talent under the cap this offseason would be surprising, but it also would reflect the general mysticism with which the cap works. Every instinct tells us it will not happen, but then all of a sudden, some kind of backroom credit default swap happens and Hendrickson is on the books for a one-year deal.

Dave Gettleman needs his hog mollies, and he will pay dearly for that right. The Giants are not going to let Leonard Williams go after trading valuable draft capital and then tagging Williams the year after. They will also do everything in their power to keep Tomlinson, as the defensive line has become their most valuable asset to this point.

With the franchise tag number for safeties sitting at roughly $10.5 million, it makes sense to tag Maye, get a top-tier safety at $4 million under top of market and give new head coach Robert Saleh a chance to evaluate him in the scheme.

The idea of Seattle utilizing a down market to keep Griffin on a one-year pact has been floated before. He feels integral to that scheme despite how much the defense struggled as a whole. If the Seahawks’ plan is to continue maximizing their window of Super Bowl legitimacy under Russell Wilson, keeping Griffin makes some sense.

It would be difficult to imagine Godwin hitting the open market, especially after the Buccaneers reached and won the Super Bowl this year. All focus is on retaining weapons for Tom Brady and rightfully so. The way Bruce Arians and Brady were able to meld their philosophies in time for an epic late-season run has changed the calculus in Tampa. Keeping Godwin for an estimated $16.4 million next year (via Over The Cap) is more than reasonable.

Barrett has said in recent weeks that he plans on “breaking the bank” this offseason and has his eyes set on a long-term deal. Indeed, it makes sense for Barrett, who is 29, to want long-term security in lieu of another one-year contract. Barrett also filed a grievance against the Buccaneers last year (which is still unresolved) when he wished to be tagged as a defensive end and not a linebacker.

It’s unlikely Washington’s troika of seasoned front office minds would venture down that road. Multiple tags on generational Washington players have a tendency of not working out. Still, it could make sense to tag Scherff to ensure he does not go anywhere, especially if the plan is for the talented guard to be protecting a rookie quarterback (or another new veteran addition).