A Quiet Life Out of the Spotlight? Not for This Former President

Opinion: Laurie Hernandez accomplishes what she wanted in first meet since Rio Olympics

Trump Will Run Again In Part To Fleece The ‘Rubes,’ Predicts Anthony Scaramucci

In January the U.S. Department of Defense sanctioned Chinese civil-aviation manufacturer COMAC due to concern that it shares technology with the People’s Liberation Army.

The Pentagon warned that Beijing’s policy mandating civil-military cooperation means any technology provided to civilian aerospace companies is subject to exploitation by the military.

This decision could have consequences for plans to equip the B-52 bomber fleet with new engines.

The Air Force wants to upgrade the B-52 for several more decades of service, including installing new engines. However, one of the engines under consideration for the project is used by COMAC to power its ARJ21-700 regional jet. 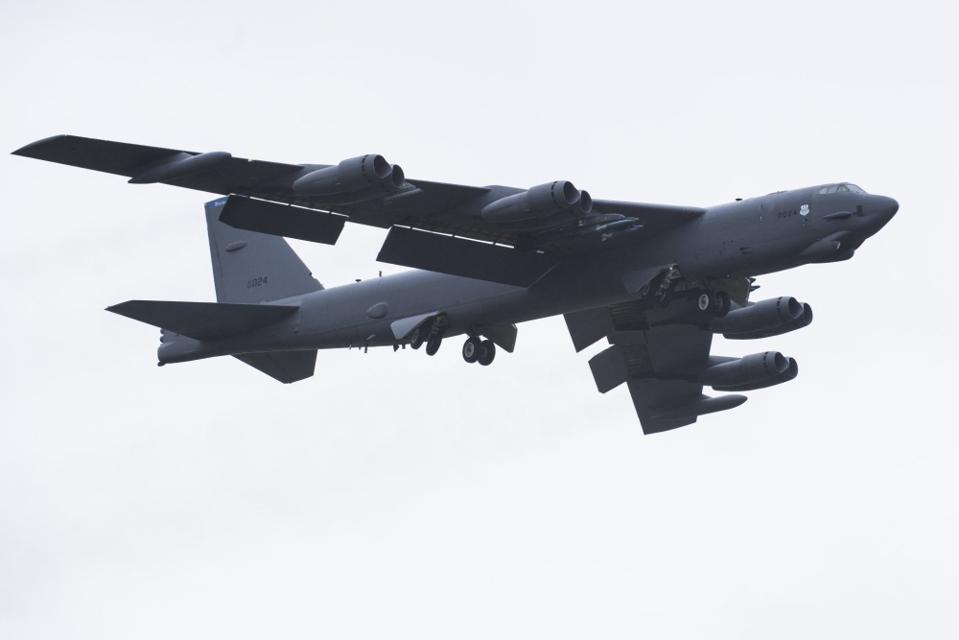 A B-52 bomber displaying all eight of its TF33 turbofan engines.

The reasoning behind the sanctions move suggests that China’s military may have extensive knowledge of that engine, General Electric’s CF34, including its potential vulnerabilities.

Does this pose a security challenge? It isn’t clear. But it could complicate a reengining project that is already a good deal more complex than many observers realize.

The Air Force decided in 2018 to retire its B-1 and B-2 heavy bombers while retaining the older B-52 in active service until 2050, because it is less expensive to maintain. The B-1 and B-2 will gradually exit the fleet as the next-generation B-21 bomber populates the fleet in the 2030s.

The B-21 may ultimately replace the B-52 also, but for the next 30 years Boeing’s BA Stratofortress will play a critical role in both conventional warfare and nuclear deterrence. The Air Force plans to spend over $20 billion upgrading B-52 communications, radars, munitions-carrying capacity, and engines.

The engine part of the mod program is the most challenging, because the B-52 carries four Pratt & Whitney TF33 turbofans on each wing in dual-engine pods (Pratt contributes to my think tank). These pods, which are located well forward of the wings, will have to be redesigned to accommodate modern engines.

The bigger and heavier the new engines are, the greater the structural stresses they may impose on control surfaces and the pylons attaching them to the wings. The same is true if the engines are significantly more powerful than those they replace.

What the Air Force ideally wants is new engines that mimic the performance of the current TF33s—in other words, engines that don’t unduly stress the airframe but offer substantial gains in fuel efficiency and reliability.

The service has four commercial engines from which to choose: Pratt’s PW800 that powers Gulfstream business jets, GE’s GE CF34 that powers the Chinese regional jet, GE’s Passport series of engines and the Rolls Royce BR725. It will decide later this year which engine it wants, in a competition known as the Commercial Engine Replacement Program (CERP).

However, the decision to sanction COMAC adds a new dimension to the source selection process, because the Air Force has to assume that China’s military has an intimate understanding of one of the GE offerings.

How might that impact future performance? For starters, the installation of new engines will include replacement of TF33 hydromechanical controls with a “full authority digital engine control,” or FADEC, system. That system will optimize engine performance using sensors and computers, but it inevitably will be more vulnerable to cyber intrusion than the existing system.

FADEC systems typically do not provide a manual backup to pilots if computer hardware and/or software malfunction. So the Air Force’s source selection authority will have to think through whether there is a cyber threat associated with selecting engines that are in use by China’s aerospace industry.

This is a layer of complexity that the Air Force probably didn’t contemplate when it initiated the CERP reengining effort. General Electric heralded its role in helping China’s aircraft industry to mature at the beginning of the last decade, but attitudes toward China have hardened since then in Washington.

President Biden has signaled that he is likely to continue sanctions imposed on Chinese commercial companies by the Trump administration. The possibility that said companies may be sharing foreign technology with the People’s Liberation Army is a major concern among U.S. policymakers.

With so many other questions coming into play in selecting new engines for the B-52, this is an additional headache the Air Force does not need. Recent cyber intrusions by Russia and China have highlighted how clever hackers can create problems for U.S. users that even the experts failed to anticipate.

So the Air Force will need to look beyond the price and performance of the CF34 to consider whether there are security concerns associated with using an engine that has been sold to China. Such issues are likely to proliferate as the joint force turns increasingly to commercial suppliers that sell their products overseas, or depend on sources there for key technology inputs.