President Joe Biden has inherited bipartisan consensus in Washington that China will be America’s great strategic challenge for the coming decades, as well as increasing recognition that Western commercialist policy helped the Chinese Communist Party entrench its authoritarian rule and project influence.

The tone of the 2020 presidential election was China-skeptic, with Biden forced to vow a tough line on Beijing to fend off warnings from President Donald Trump and his allies that Democratic control of the executive and legislative branches would see broad capitulation to the CCP.

Beijing certainly hoped so, and since Trump’s defeat has been pushing for a reset in ties with the White House after four years of combative relations under the previous president. On Monday, for example, Chinese Foreign Minister Wang Yi said it was time for the two sides to return to constructive dialogue.

But Wang also accused the U.S. of “smearing” the CCP and interfering with Chinese internal affairs—i.e. American condemnation of Beijing’s human rights abuses in Xinjiang, Hong Kong, Tibet and elsewhere. Wang also said Washington must stop “conniving” with Taiwan to help it assert its independence.

For all the GOP warnings, Biden’s administration has largely maintained the Trump-era pressure on Beijing. Earlier this month, Biden ordered a military review to ensure the Pentagon is fully prepared to face Chinese threats.

The administration has also maintained staunch opposition to Chinese domestic human rights abuses and U.S. support for continued Taiwanese independence, backing up the latter with freedom of navigation operations in the South China Sea.

On Monday, State Department spokesperson Ned Price responded to Wang’s allegations, dismissing his complaints as a “continued pattern of Beijing’s tendency to avert blame for its predatory economic practices, its lack of transparency, its failure to honor its international agreements, and its repression of universal human rights.”

“We’ll continue to stand up for our democratic values when human rights are being violated in Xinjiang, Tibet, or elsewhere in China, or when autonomy is being trampled in Hong Kong,” Price added, stressing the administration would approach ties with Beijing “through the prism of competition from a position of strength.”

Biden’s foreign policy rests on multilateralism and long-held American alliances—two things Trump critics said the former president did lasting damage to through his nationalistic “America First” agenda. On China, Iran, climate change, and other pressing issues, the administration’s first steps have been consultations with allies.

This week, Secretary of State Antony Blinken held a call with counterparts from India, Japan and Australia, which together make up the Quad—the Quadrilateral Security Dialogue group first established in 2007 but revived under Trump in 2017.

“We view the Quad as having essential momentum and important potential, so we’ll build on it by deepening cooperation on areas of traditional focus—that includes maritime security,” Price said. He added that the group will work together on “defining challenges and even opportunities of our time,” including the coronavirus pandemic, climate change, and “democratic resilience.”

The simmering technological conflict between the U.S. and China was a key thread of Trump’s contest with the CCP. Chinese telecoms giant Huawei has become synonymous with Western concerns about Chinese-owned businesses, and the Trump administration pushed its allies—with limited success—to block the firm from nascent 5G networks, citing security risks.

Price suggested the Biden administration will continue Trump’s offensive on Huawei, but indicated Biden would be more measured in pressing American allies to toe the line on Chinese technology.

Germany has not yet blocked Huawei from its networks, although Berlin has introduced new legislation aimed at giving its competitors a leg up.

“We know that especially when it comes to countries with whom we have a close alliance or partnership—and of course, that includes Germany—that we have to confront this challenge together: China’s abuse, China’s predatory practices, China’s export of tools it uses to further its brand of techno-authoritarianism,” Price said Monday. “It is something we are working very closely with our partners and allies, and that includes Germany.”

“The stakes for securing these networks could not be higher,” Price added. “5G is transformative, it will touch every aspect of our lives including critical infrastructure, and it’s something that, of course, we are discussing very much with our partners and allies.” 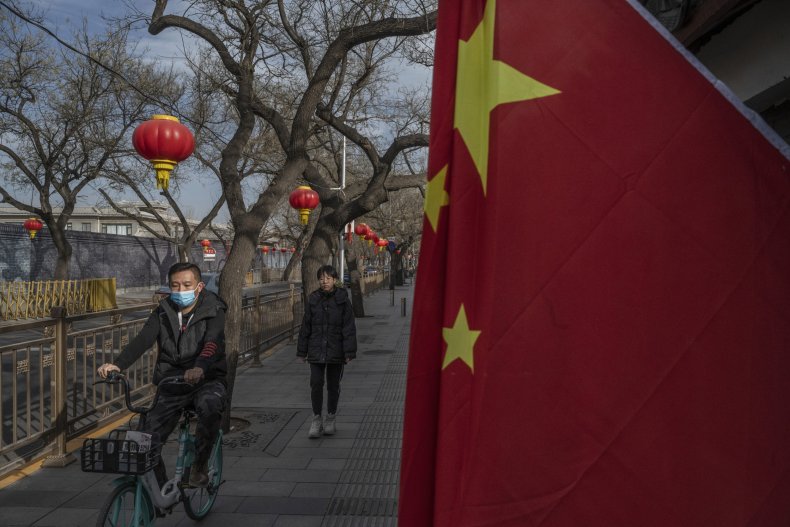 People are pictured next to a flag hung for the recent Chinese New Year holiday, also known as the Spring Festival, in a residential area on February 19, 2021 in Beijing, China. Kevin Frayer/Getty Images/Getty