Dressing for a Hotter Planet: In Dubai, Designers Face an Uncertain Future With Creativity

The tailwinds propelling the healthcare sector into 2021

By the numbers: VA’s coronavirus response one year later

Sen. Josh Hawley, the Missouri Republican who led efforts to overturn the results of the 2020 presidential election, said he isn’t going to launch a White House bid in 2024.

“No, I’m not running,” Hawley told Insider in a brief hallway interview on Tuesday at the US Capitol before ducking into an elevator. He didn’t elaborate.

The tough-talking first-term senator appeared to be eyeing the Oval Office, with a new book due out in May from a conservative publisher after being dropped by Simon & Schuster. His national profile has increased through fiery speeches and loyalty to now-former President Donald Trump.

But Hawley, a fast-rising 41-year old who also served as Missouri’s attorney general, has also drawn the ire of both Republicans and Democrats. Some have even called for his resignation for his role spearheading then-President Donald Trump’s attempt to secure a second term despite losing last November’s presidential election.

Hawley led the charge in the Senate to challenge the Electoral College vote tally that would affirm President Joe Biden’s win. Hawley’s repeated false assertions of widespread voting fraud in the 2020 election helped inspire an angry mob of Trump supporters to violently attack the Capitol on January 6 as they sought to halt the vote-counting process.

A few hours before Trump supporters broke through police barricades and ransacked the Capitol, a photograph went viral of the senator outside the historic building raising his fist to them in a signal of support.

Read more: 7 Democratic senators call for ethics probe into Cruz and Hawley to determine whether their electoral college objections contributed to the Capitol siege

Hawley is one of several Republicans widely thought to be exploring a presidential run in 2024. Insider in December ranked him No. 8 among potential contenders for the next presidential election cycle. Of course, 2024 is still far away and gives Hawley enough time to change his mind as lots of politicians do.

It would certainly not be the first time Hawley has made an aboutturn. He famously won his attorney general race in 2016 criticizing “career politicians just climbing the ladder, using one office to get another.” Two years later, he ran for the Senate and won, leaving his attorney general post after serving just half of his four-year term.

But the GOP field right now is frozen until it’s clear what Trump plans to do. 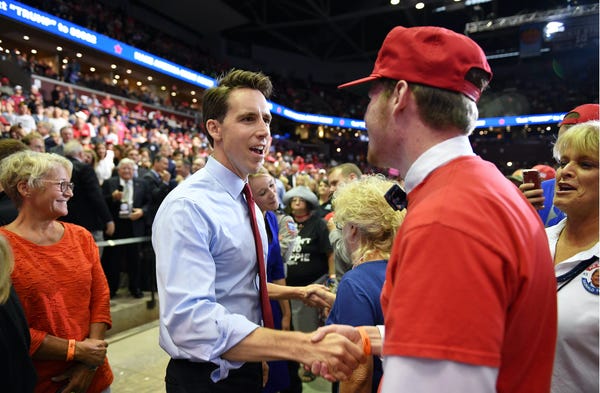 If Trump chose to try for a second term, he would enter the Republican presidential primary as the clear front runner and make it difficult for any other Republican to win the primary.

Trump’s overall popularity has dipped to historic lows, but he remains very much loved in the Republican Party, and in November, he received the most votes ever for a sitting US president.

The prospect of a Trump 2024 run forces Republicans into a careful dance.

On one end, some of the possible White House contenders will be trying to court the more than 74 million people who voted for Trump in November. On the other end, some will attempt to carve out their own paths and get ready to jump in should Trump not run.

When Insider asked Hawley if he thinks Trump should step aside so other Republicans can make their presidential ambitions known and lay the groundwork for a campaign, he responded, “I don’t know, you’d have to ask them. Ask my colleagues.”

Another potential GOP hopeful, Sen. Marco Rubio of Florida, demurred when asked about his 2024 plans. Rubio ran for president against Trump but came up short during the 2016 Republican primaries.

“I’m running for the Senate in 2022. I haven’t thought beyond that,” Rubio told Insider on Tuesday at the Capitol.

When asked if he’d want Trump to be barred from ever serving in office — the end goal of Senate Democrats’ impeachment trial, and a decision that would open the field for other Republicans — Rubio, said, “Who are we to tell people who they can vote for?”