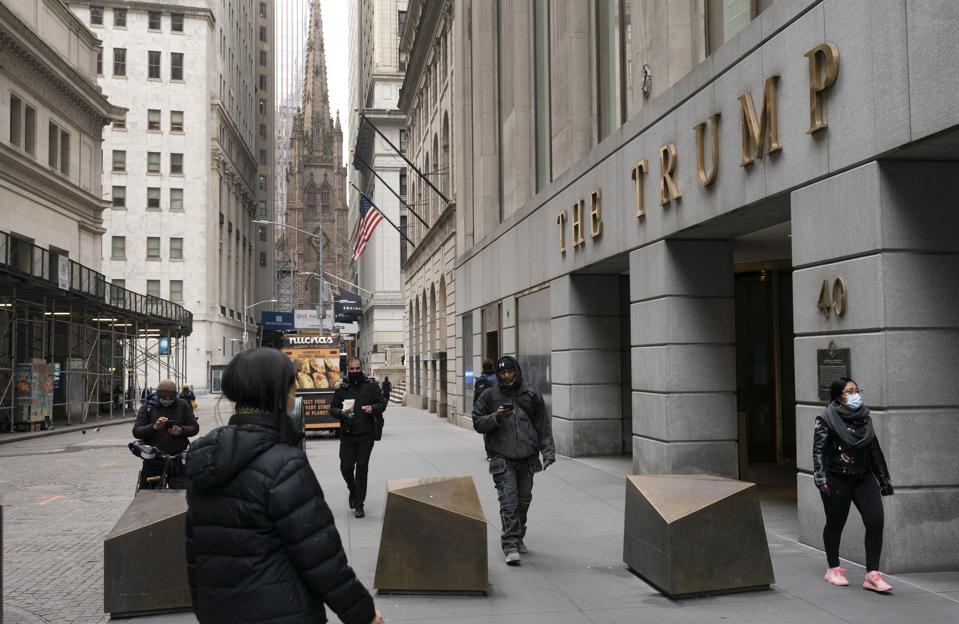 A nonprofit organization named TB Alliance is looking for ways to move out of its space at 40 Wall Street, the president’s skyscraper in downtown Manhattan.

A representative for the organization, which focuses on tuberculosis drugs, hinted that the decision might be tied to last week’s riot at the U.S. Capitol—but did not explicitly say it was.

In response to an email asking whether the organization was planning to change its lease in the building given all the political news, a spokesperson replied, “Yes, we are exploring all options for relocating outside of 40 Wall Street.”

Pressed on whether the organization was looking to leave solely because of the events at the Capitol, or because of the president’s politics more generally, the spokesperson clammed up. “Nothing else to add,” he said. When asked again whether the decision had to do with Donald Trump’s politics, he did not respond.

TB Alliance pays an estimated $900,000 in annual rent at the property, which Trump did not divest upon taking office.

The news follows a Wednesday report in Business Insider that another tenant, the Girl Scouts of Greater New York, is also trying to vacate Trump’s Lower Manhattan tower. That organization is locked into a 15-year lease that began in 2014 and comes with an average annual rent of $644,000.

Losing the two tenants would be an annoyance for Trump, but it certainly wouldn’t be destabilizing—unless some bigger renters also start heading for the exits. The president collects an estimated $191 million each year through his commercial real estate holdings.

Fortunately for Trump, many of his tenants are locked into longstanding lease agreements. Walgreens Boots Alliance spends an estimated $3.2 million on rent in 40 Wall Street, which appears to be more than any other tenant. Its two leases in the building expire in 2028 and 2032, according to a debt prospectus tied to the property. Gucci pays more than $20 million a year for space inside Trump Tower, making it the most lucrative tenant in the president’s entire portfolio, but its lease does not run out until 2026.

There is another complicating factor for Trump tenants who may want to distance themselves from the president. Many of the biggest—including Bank of America, JPMorgan Chase and Goldman Sachs—are located inside San Francisco’s 555 California Street and New York City’s 1290 Avenue of the Americas. Trump holds 30% stakes in those buildings worth an estimated $784 million combined, but publicly traded Vornado Realty Trust owns the other 70% and manages the properties on a day-to-day basis.

Follow me on Twitter or LinkedIn. Check out some of my other work here. Send me a secure tip.