The President-elect’s appearance in Wilmington, Delaware, defined a precarious moment in US history as he prepares to confront the most extreme challenges of any new president in 90 years following his inauguration next Wednesday. Making his mission even harder, he will take the oath of office amid soaring fears of violence by pro-Trump extremists, which will mean the National Mall will be empty of its carnival crowds of thousands who traditionally witness the sacred transfer of presidential power.

“It’s not hard to see that we are in the middle of (a) once in several generations economic crisis, with the once in a generation public health crisis,” Biden said. “The crisis of deep human suffering is in plain sight. There is no time to waste. We have to act and we have to act now.”

Biden’s speech represented an attempt to wrest America’s attention away from the fulminations of outgoing President Donald Trump and the crazed drama of his self-obsessed final days. It came as Biden and top aides worked with the incoming Democratic leadership in the Senate and top Republicans to try to ensure the constitutional circus of Trump’s impeachment trial does not slow Biden’s emergency Covid-19 package or the effort to confirm top Cabinet officials needed to help ease the country’s misery and secure the homeland.

Biden’s speech did not just allow him to get a jump on his legislative agenda. It also gave him the chance to set out the dire state of the nation he will lead in just five days and to establish a baseline from which to manage the expectations on which he will be judged.

He, for instance, blasted the current administration’s vaccine rollout as a “dismal failure.” And he added: “There will be stumbles, but I will always be honest with you about both the progress we’re making and what setbacks we meet.” Such positioning served a rhetorical purpose by providing context before Biden attempts the more inspirational assignment facing new presidents of enlisting a nation to tackle the crises of their time in his inaugural address next week.

A first test of Biden’s power

Thursday’s televised address was the first glimpse of a new, more traditional and detail-oriented vision of presidential leadership after the zero-strategy chaos of the Trump years. It represented Biden’s opening gambit in the duel with Senate Republicans that will define his legislative prospects.

Conservatives, for instance, are likely to balk at the cost of the program and its expanded aid for state and local jurisdictions that Democrats failed to insert in the previous emergency spending package last year. Those conservatives are unlikely to welcome Biden’s pledge to soon unveil a follow-up recovery plan that will include billions more in spending. But such high price tags also represent pressure on Biden from the progressive wing of his party, in a preview of a dynamic that will endure for his entire term.

Biden’s vast plan is also the first test of his power to drive his ambitious agenda through the 50-50 Senate chamber, which will be controlled by Democrats thanks to the tie-breaking vote of Vice President-elect Kamala Harris. But the majority may have to resort to controversial procedural measures to give the new president what he wants, which could fracture Biden’s hopes of future bipartisan cooperation.

The President-elect’s initiative is packed with extended unemployment benefits, rental assistance, aid to small businesses and $1,400 more in stimulus payments, in addition to the $600 already appropriated. Biden wants billions of new spending to help schools open, $20 billion for a national vaccine plan and $50 billion for expanding coronavirus testing and plans to hire an army of 100,000 public health workers.

Such aggressive proposals are more than an attempt to fix the poorly planned and woefully executed Trump administration approach to the pandemic, which put the onus on states to stem the spread of the virus. They represent a recognition that the nation’s future and the success of his presidency in its crucial first few months depend on urgent action and funding.

The image of a president summoning the nation to unite behind a government plan, in part to pressure his opponents on Capitol Hill, is familiar from generations of US history. But it was a novel experience after four years in which White House legislative efforts have consisted of orders barked over Twitter and wild reversals of position that infuriated even Trump’s allies. 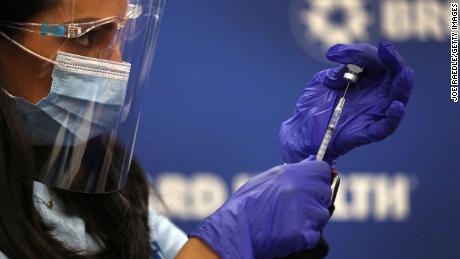 When can YOU get the vaccine? It depends on your health, occupation and where you live

It’s also been a while since a president, or a president-to-be, has demonstrated the ability to empathize with the bereaved — as Biden did Thursday night — and made the people’s business his primary focus. Trump repeatedly failed at those duties — even as the nation was engulfed in the worst public health crisis in generations, which has killed at least 387,000 Americans. Trump has been checked out for months, and he is now spending most of his time watching television, nursing his grievances and lashing out over his second, self-inflicted impeachment.

No new commander in chief since Franklin Roosevelt in 1933 has faced a tougher baptism of crises than Biden. His inheritance dwarfs the alarming scenarios that confronted President Barack Obama, whom he served as vice president, in 2009.

The need to speed up vaccine distribution

For many Americans, Biden’s new plan for Covid-19 relief could not come quickly enough, as states struggle to get their most critical populations vaccinated — facing shortages in supplies, health care workers to administer the vaccine and the resources to get doses all the way to the so-called last mile in each state’s health care system.

The Trump administration had promised it would vaccinate some 20 million people by the end of 2020, but so far Operation Warp Speed has been able to get only about 10 million doses out to state and local governments — falling woefully short on that goal after the federal government essentially dumped the logistical responsibility of distributing those first doses on the states. US Centers for Disease Control and Prevention data shows that only about 35% of the vaccines distributed to states have been administered. 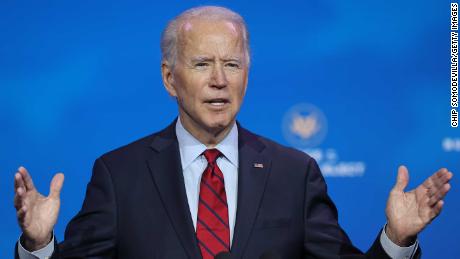 Earlier this week, federal health officials abruptly changed course to try to accelerate the pace of vaccine distribution. Health and Human Services Secretary Alex Azar announced that the administration would release the reserved second doses of the Pfizer and Moderna vaccines to ramp up the supply available to states in order to vaccinate new patients — and Azar also said states could expand the universe of people eligible for the vaccine to those 65 and older. (He insisted that the government is 100% committed to ensuring that every American who receives a first dose of the vaccine will get a second dose.)

Azar argued that states should not wait until one priority group is fully vaccinated before beginning to inoculate the next eligible group. But many states and local officials have said they simply do not have the promised resources needed to get those doses out more expeditiously.

Biden addressed the lack of a systematic national distribution plan Thursday night — and the underfunding of states to get the vaccine out and devise education programs to ease concerns among the vaccine-adverse. He said he was asking Congress for some $400 billion to help end the pandemic, with much of that money going toward speeding the delivery of vaccines to anxious Americans.

“The vaccine rollout in the United States has been a dismal failure thus far,” Biden said, noting that he would lay out his vaccination plan on Friday to “correct course” and to meet his goal of 100 million shots over his first 100 days.

“This is one of the most challenging operational efforts we have ever undertaken as a nation,” the President-elect said. “We’ll have to move heaven and earth to get more people vaccinated; to create more places for them to get vaccinated; to mobilize more medical teams to get shots in people’s arms; to increase vaccine supply and get it out the door as fast as possible.”

“The very health of our nation is at stake,” Biden said. “The more people we vaccinate, the faster we do it, the sooner we can save lives and put this pandemic behind us.”