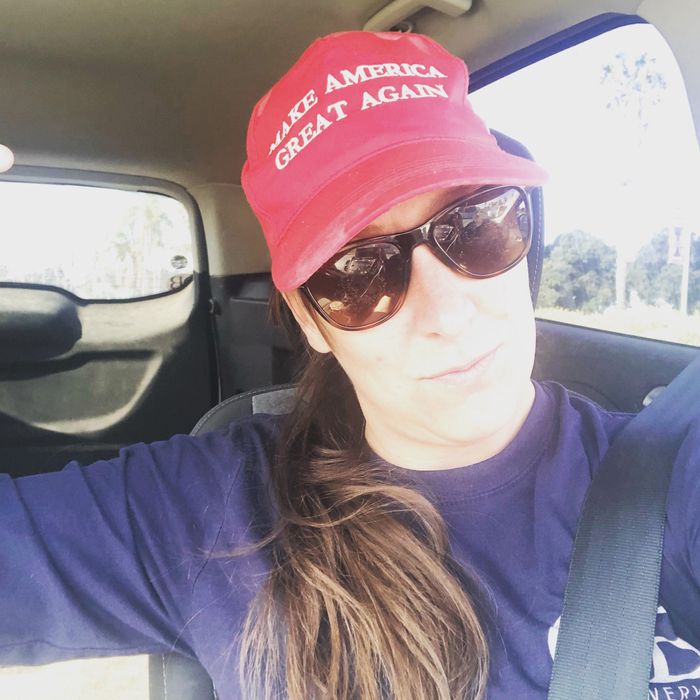 Ashli Babbitt did not hide her far-right political views. Outside her San Diego bungalow, located blocks from the beach, she flew both an American flag and a QAnon flag emblazoned with a giant Q and the acronym WWG1WGA, for “Where we go one, we go all.” She plastered her SUV with pro-Trump bumper stickers and a Blue Lives Matter flag. On the door of the local pool-servicing company that she ran with her husband, uncle, and brother, a poster declared it to be a “mask free autonomous zone, better known as America” and added, “If you need to wear a mask outside, I’m not sure we can help you.”

Even so, people close to Babbitt said they had no idea how devoted she was to Donald Trump and his movement until they saw her with a mob inside the U.S. Capitol. Wearing a Trump flag over her shoulders, Babbitt made it as far as a cloakroom just off the House floor when she climbed through a window and was shot by a Capitol police officer on the other side. Babbitt, 35, later died of her injuries. Now her family members are trying to reconcile their own image of the feisty but private woman they knew with the one who stormed Congress as part of a violent mob that called for the killing of lawmakers.

“I actually saw it first on video when I was on the phone with multiple hospitals trying to find her,” said Kayla Joyce, 29, who said she is the mutual live-in girlfriend of Babbitt and her husband, Aaron. “We found out through the news. Through live television.”

“I thought she was just going to a rally. And I think that was all it was, until it wasn’t,” said Joyce, who has known the couple for about a year. “It was extremely unlike her to put herself in that position.” Aaron Babbitt did not respond to requests for comment.

Babbitt was one of thousands who flocked to Washington, D.C., to support Trump in his ongoing effort to dispute the results of the 2020 election he lost. Speaking on the morning of January 6, Trump called on his supporters to protest what he falsely claimed was a theft of the election by Congress, pushing them to “fight like hell,” then head to the Capitol.

“I blame Trump. How could you not? I mean he is their figure, their president,” Joyce said. “Why else would they do that unless their leader tells them to do that?”

Joyce pleaded that the image of Babbitt being presented online and in the press wasn’t the real her: “She wasn’t a terrorist. She wouldn’t have put herself in harm’s way for any bad reason. If I could get into her head and pick her brain, I would.” Joyce added that Babbitt’s death shouldn’t be celebrated by anyone. “It shouldn’t be construed that because she had an opinion that she deserved it. It’s just gross what they are saying.”

Joyce has spent recent days speaking to the FBI, making her and Aaron’s social-media accounts private, and dodging an endless barrage of reporters at their door. They await the return of her ashes and are planning a small memorial. There will be no headstone. “I don’t want this attention. We don’t want this. She wouldn’t have wanted this,” said Joyce. “We were very local, private people. We barely even leave our community.”

Tiny in stature, Babbitt wasn’t shy about voicing her strong opinions, according to friends and neighbors. The Air Force veteran would hold court at barbecues for hours about the state of the country, but she often segued into conspiracy-theory-tinged rants that people couldn’t comprehend. “You just had a hard time even following what she was saying,” said one neighbor, who requested anonymity because of a fear of online backlash.

Joyce said she didn’t follow Babbitt on Twitter, where Babbitt’s devotion to Trump and conspiracy theories went beyond backyard political debates; she tweeted far-right talking points and openly backed QAnon conspiracies, including the belief that high-ranking government officials were running an elaborate pedophilia ring. Her photos show that she attended a pro-Trump boat rally, called President-elect Joe Biden a “kid raper,” and believed COVID-19 is a hoax. The day before she stormed the Capitol, she tweeted that it would be a day to remember, as QAnon prophecy foretold. “Nothing will stop us,” she tweeted on January 5. “They can try and try and try but the storm is here and it is descending upon DC in less than 24 hours….dark to light!”

“To be perfectly frank with you, I knew my granddaughter was into politics, but I didn’t know how deep,” said Anthony Mazziott, Babbitt’s grandfather, who lives a 20-minute drive away from her house. “She kept me totally ignorant. So I’m a little bit surprised, to be honest with you. She was the perfect granddaughter; she took care of her grandfather when she could.”

Her neighbors are similarly having to reconcile their memory of Babbitt with the person they’ve seen on TV. “It is upsetting to grasp that she, my neighbor, is seen as a national terrorist. It’s gut-wrenching to think the passion she encapsulated for Trump would end up being her death,” one said. “I knew she was passionate, but I thought most people don’t act on their passion,” said another neighbor who requested anonymity. “That’s next level, to be the first person going through that window.”

Mazziott said he learned his granddaughter was going to Washington only two days before she left, and Joyce said she and Aaron told Babbitt they did not want her to go because they didn’t like the idea of her traveling alone. Finally, the three all agreed they would be comfortable if Babbitt promised to stay in constant contact with their “pod” and check in every 30 minutes.

Joyce said that she and Aaron must now also face how to salvage the family pool company, which has already lost customers. It has become increasingly hard not to place blame on the deceased. “We’re upset with her,” Joyce said. “We truly just never thought this would happen.” Yet they tell their friends, especially those who were with Babbitt in her final hours in Washington, not to pass any judgment.

“We tell them, just try to remember that when you get angry with her, focus on who she was,” Joyce said. “She was extremely happy that day. And that’s all I think about.”