The stakes are high for Biden’s inaugural address. Here’s what to expect.

Report: Marty Hurney is the top candidate to be Washington GM

For U.S. adversaries including Russia, Iran and China, the Capitol siege offers a window of opportunity – MarketWatchMarketWatch logo

U.S. adversaries are likely to see the recent Capitol siege as an opportunity to quickly take action against U.S. interests ahead of Inauguration Day, calculating that a distracted Washington will be ill-equipped to respond to provocations that may strengthen their negotiating leverage with President-elect Joe Biden’s incoming administration.

Since Jan. 6, multiple key national security officials have announced their resignations, reducing the cadre of security experts who have longstanding relationships with President Donald Trump.

To avoid anything close to a repeat of the Jan. 6 siege, national security officials in Washington will be laser-focused on guaranteeing the safety of the events surrounding Inauguration Day on Jan. 20, though doing so will risk diverting resources and attention from potential foreign threats.

U.S. adversaries have widely characterized the chaos at the Capitol as evidence that Washington does not have the right to lecture other countries about their behavior. They’ve also claimed false equivalencies between the Capitol rioters and activists in their respective countries to justify their own recent crackdowns on dissent.

Some adversaries are likely to use the Capitol siege as a catalyst to take new malign actions, while others will instead use the events of Jan. 6 to justify their existing destabilizing behavior.

Over the longer term, U.S. adversaries will likely leverage the events of Jan. 6 to thwart the Biden administration’s efforts to reinvigorate democracy promotion abroad, enforce global norms and penalize bad behavior, as well as broader efforts to rehabilitate American credibility and influence on the world stage.

Adversaries are also likely to consider how they can exploit the extreme societal divisions on display on Jan. 6, including via further online disinformation efforts, some of which helped spur the Capitol siege in the first place. Numerous U.S. adversaries — ranging from superpower competitors like China and Russia, to regional actors such as Iran and North Korea, and even local ones like Belarus and Zimbabwe — have publicly portrayed the Capitol siege as proof that the United States is unfit to lead the world.

The violence at the Capitol will also feed revisionist narratives from countries such as China and Russia that the U.S.-led Western system of democracy is inherently flawed compared with the governance and alleged stability of authoritarian regimes.

This article was published with the permission of Stratfor. 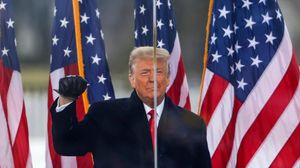 President Donald Trump acknowledged his election loss and condemned an attack on the U.S. Capitol in a video on Twitter Inc. late Thursday, a day after his support for the attackers led to bans from social-media companies.