The stakes are high for Biden’s inaugural address. Here’s what to expect.

Report: Marty Hurney is the top candidate to be Washington GM 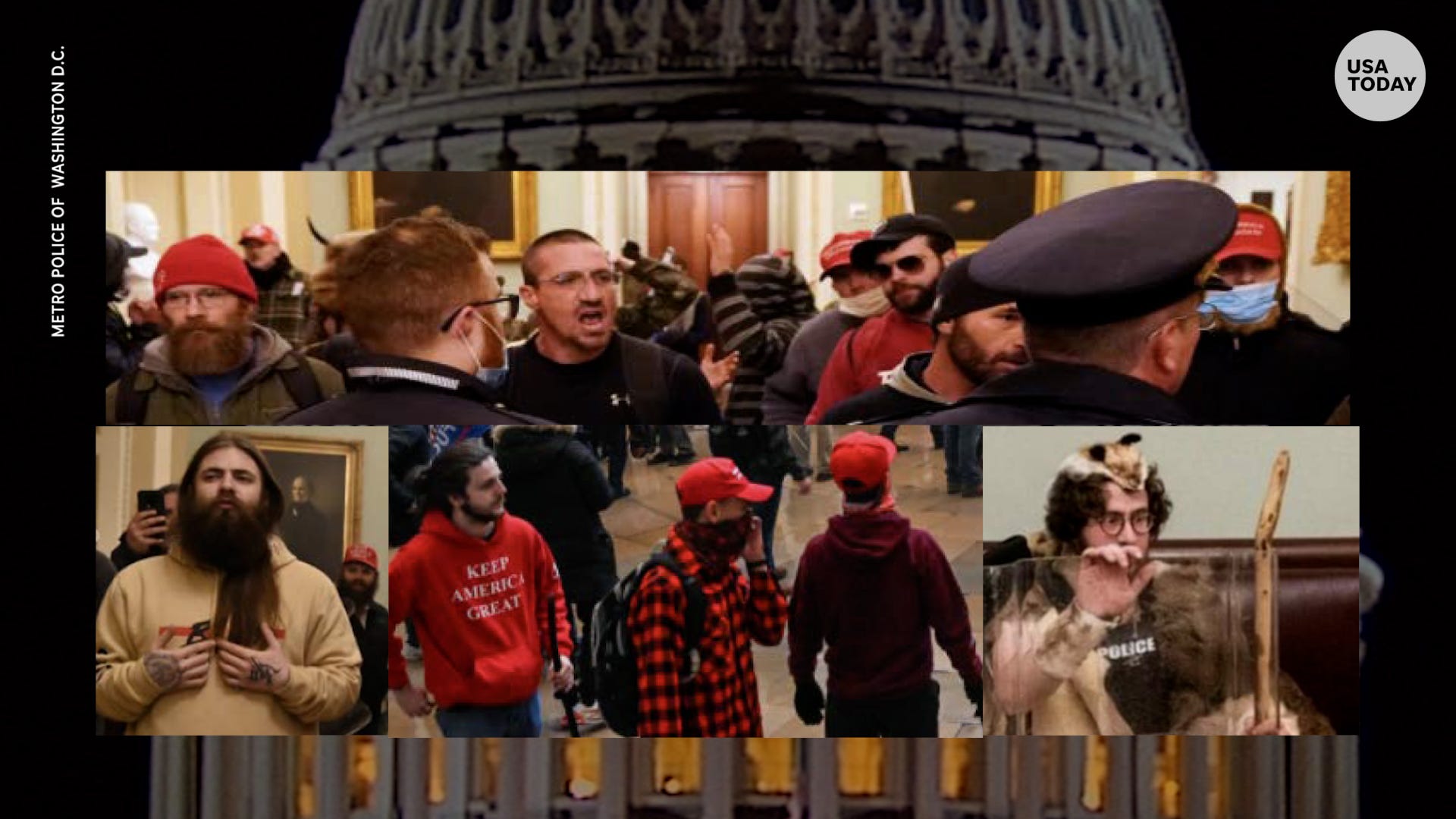 The FBI is using social media to identify who the participants were and what their motivations were.

With a growing number of arrests and charges related to last week’s storming of the U.S. Capitol, multiple law enforcement agencies are building a sprawling investigation into who participated in the violence that claimed at least five lives and sent fearful lawmakers into hiding.

Nearly 100 people have been arrested for their roles in the attack carried out by thousands of President Donald Trump’s supporters or in unrest surrounding the Capitol that day. Many face lesser charges such as unlawful entry, disorderly conduct and defacing public property. Only a few have been accused of more serious crimes, such as felony violations of the Riot Act.

In the cases of those who attacked the Capitol, those initial charges could be a precursor of more serious allegations, said University of Texas law professor Bobby Chesney.

“It remains to be seen how aggressive the Justice Department will be in terms of going after organizers and ringleaders,” Chesney said. “No doubt the FBI and DOJ would prefer to get past January 20, moreover, both for the sake of general calm and to avoid any prospect of a pardon shutting down a particular case.”

Heading up the task of identifying, locating, arresting and charging offenders falls on the shoulders of Michael Sherwin, acting U.S. attorney for the District of Columbia. He told National Public Radio this week that “hundreds” could ultimately face charges.

No charges are off the table, Sherwin said. Seditious conspiracy, rioting and insurrection will be considered if warranted.

“Prosecutors have a tremendous amount of discretion, and this was an unprecedented assault on our seat of government,” said University of Wisconsin Law Professor Keith Findley. “My guess is they’ll take that very seriously. … They’ll have many, many options to charge independently, or stack offenses. There’s a lot on the table.”

But some, like Anne Milgram, a New York University law professor and former attorney general of New Jersey, criticized the lack of more serious charges for those accused of ransacking the Capitol.

“What we’ve yet to see is a connection to seditious conspiracy,” Milgram said. “It feels to me, and everyone who watched, that the goal of this mob was to stop Congress from certifying the vote. … The charges right now do not match the harm.”

Milgram said she expects the heaviest charges to stem from the death of Capitol Police officer Brian Sicknick. Others have suggested several members of the mob could face felony murder charges in that case similar to a getaway driver in a fatal robbery.

Prosecutors have primarily focused on those caught on camera and identified by tipsters in photos and videos. Department of Justice officials, for example, have announced the arrests of notable viral participants, including Jacob Chansley, aka Jake Angeli, the Arizona man who wore a fur hat and horns; Adam Johnson, the Florida man photographed carrying Nancy Pelosi’s lectern; and Eric Munchel, the Tennessee man depicted in tactical gear carrying plastic wrist restraints.

Federal investigators also have the option of serving subpoenas on technology companies to preserve content that perpetrators might try to delete.

Pete Eliadis, president and CEO of Intelligence Consulting Partners, a security firm, faulted Capitol Police for failing to secure the building and make arrests on the scene, which will make the job harder for investigators.

But he believes the government will try to make an example out of the key figures whose viral images show their role in inciting violence.

“They want to make a statement that this will not be tolerated, so if they can make a plausible arrest, they will,” Eliadis said. “The ones who wanted the attention, they’re going to get the attention. It’s easier to focus on them than the masses coming through.”

Labeling the riot and finding the most accurate charges could be difficult without a domestic terrorism law, which Congress has considered for years, said Chris Bonner, a retired FBI agent who teaches courses on homeland security at Embry-Riddle Aeronautical University in Daytona Beach, Florida.

“The very first thing people want to do is call something terrorism. There is no federal law covering domestic terrorism,” Bonner said. “If we’re going to decry something and criminalize it, we better have a law to cover it and then it better be equally applied across the ideological spectrum from extreme left to extreme right.”

Summer unrest a backdrop for charges

Federal prosecutions for the Capitol riot will undoubtedly draw parallels to unrest last summer over the killings of Black Americans by police.

Last year, following weeks of unrest in several cities after the death of George Floyd, Acting Attorney General Jeff Rosen wrote a memo telling federal prosecutors to consider a sedition charge against protesters who conspired to “take a federal courthouse or other federal property by force.”

And federal prosecutors took over charging cases against more than 100 protesters in two particular hotspots – Portland and Seattle. But dozens of those charges were low-level citations or misdemeanors. Most of the Portland cases have not gone to trial because the pandemic has backlogged the courts. That trend will probably continue for suspected D.C. rioters; many may not see a trial before the end of 2021.

Michael Filipovic, federal public defender for the Western District of Washington state, said the U.S. attorney took over several state court charges and sought to send a message with tougher penalties. He said comparing Wednesday’s riot to protests over the summer is difficult.

He predicted misdemeanor charges for many Capitol trespassers but more weighty charges to come soon.

“If prosecutors can prove you had a firearm, zip-ties and intent to detain or harm individuals, that’s something they’ll take very seriously where you’ll be looking at some felonies,” Filipovic said.

Edward Maguire, a professor of criminology at Arizona State University and associate director of the school’s Center for Violence Prevention and Community Safety, said he would expect to see charges more serious than those handed down during protests at President Donald Trump’s inauguration in 2017.

More than 200 people were arrested in unrest dubbed “J20” during the 2017 inauguration and charged with more serious felonies, including inciting to riot, rioting, conspiracy to riot, destruction of property and assault on police officers.

Federal prosecutors ultimately dropped charges in all but a handful of cases in which people pleaded guilty. They failed to win convictions in others that went to trial.

At the very least, Maguire expects to see felony rioting charges for those confirmed to have breached the Capitol.

“It would be appropriate for them to see jail time,” Maguire said. “This is an insurrection, and it should be charged as one.”

Maguire said social media and video surveillance would probably give prosecutors stronger cases of intent than the evidence they had from the J20 protests.

Of the early arrests made by D.C.’s Metropolitan Police, all but a handful involved curfew violation and unlawful entry. The others were arrested on more serious weapons charges or charges of defacing public property.

They included suspects such as David Fitzgerald of Illinois, who was cuffed as he tried to exit through the barricades while following news crews that were being escorted out, and Joshua Pruitt, 39, of Washington, D.C., one of the few facing felony violations of the Riot Act.

Capitol Police also focused their arrests on unlawful entry, charging more than a dozen suspects for the offense, including Michael Curzio, a 35-year-old Florida man released from prison in February 2019 after an eight-year sentence for attempted first-degree murder.

Charges against Mark Leffingwell were among the first federal charges to roll into D.C.’s District Court on Thursday. A Capitol Police officer wrote in a complaint that Leffingwell tried to push past him into the Capitol, then began punching repeatedly. While in custody, Leffingwell “spontaneously apologized for striking” him. Leffingwell has been charged with entering a restricted building, assault on a federal law enforcement officer, and violent entry or disorderly conduct on Capitol grounds.

Some legal defenses would be a stretch

Social media from the suspected rioters suggests some may attempt novel legal defenses. Some may claim the president instructed them to march to the Capitol, giving them legal cover, while others have already claimed they “got caught up in the moment.”

Neither will hold much water in court, said UW’s Findley.

“The law recognizes duress, coercion and necessity, but those are limited and require showing that the person had no choice but to commit the criminal act facing violence or death. We’re nowhere close to that,” Findley said.

A “heat of passion” defense would also require protesters to prove that a reasonable person would have been provoked to take the same action, Findley said.

Some Capitol trespassers spoke out on social media and on video after the riot that they believed they hadn’t committed a crime because police let them in – or that they simply walked through open doors. Others chanted outside that they had a right to enter because Congress works for the people.

But federal law and safety rules amid the coronavirus pandemic explicitly prohibit members of the public from entering the building. All public tours have been canceled since March 2020, and only lawmakers, staff, media and their guests with proper credentials are allowed in.

Back when tours were available, they did not include access to the Senate and House galleries, which required a separate pass obtained through the office of the visitor’s senators or representatives.

Many of the rioters also broke rules by bringing prohibited items into the building, including water, stun guns, guns, ammunition, knives, mace and pepper spray and large bags, according to the U.S. Capitol Visitor Center.

Inside the galleries there is no photography or video recording allowed except by the media and the government’s own cameras.

And smoking, which several rioters filmed themselves doing inside the building, is strictly prohibited.