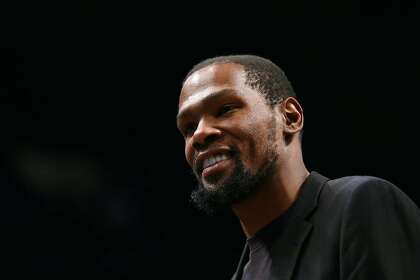 Kevin Durant will make his first return trip to the Bay Area as a member of the Nets on Feb. 13, a league source confirmed with The Chronicle.

Durant and Brooklyn will play the Warriors that night on a primetime Saturday game. This will come after Golden State opens the season Dec. 22 on the road at the Nets.

Durant, who missed last season because of a torn Achilles tendon he suffered during Game 5 of the 2019 NBA Finals with the Warriors, is expected to make a full return this season. His new head coach is Steve Nash, who spent the past five years as a player-development consultant with Golden State.

Though the full NBA schedule has yet to be released, it has been reported that, in addition to the two primetime games against the Nets, the Warriors will face the Bucks on Christmas Day.

The Athletic was first to report the news of the Golden State-Brooklyn game on Feb. 13.