FORUM 1: How will Donald Trump be remembered in the history books? Legacy will include his ideological turn

Donald Trump has pardoned his former national security adviser Michael Flynn, who pleaded guilty to lying to the FBI during an investigation into Russian meddling in the 2016 election.

Retired Army general Flynn was one of several former aides to the outgoing president to plead guilty or be convicted at trial in former Special Counsel Robert Mueller‘s investigation into Moscow’s interference to boost the former reality TV host’s candidacy.

He is expected to be the first of several key associates pardoned by Mr Trump before he leaves the White House on 20 January.

In the days since his election loss Mr Trump has returned to criticising the probe, which he has long insisted was motivated by political bias.

“It is my Great Honor to announce that General Michael T. Flynn has been granted a Full Pardon,” Mr Trump tweeted.

“Congratulations to (at)GenFlynn and his wonderful family, I know you will now have a truly fantastic Thanksgiving!”

Flynn is the second Trump associate convicted in the Russia investigation to be granted clemency by the president.

The president commuted the sentence of longtime confidant Roger Stone just days before he was to report to prison, amid a broader effort to undo the results of an investigation that has shadowed his administration and prompted criminal charges against a half dozen associates.

The pardon voids the criminal case against Flynn just as a federal judge was weighing whether to grant a Justice Department request to dismiss the prosecution – despite Flynn’s own guilty plea to lying to the FBI about his Russia contacts. Trump’s team to cooperate with transition

Coming as Mr Trump nears the end of his single term, the move is likely to energise supporters who have rallied around the retired Army lieutenant general as the victim of what they claim is an unfair prosecution.

His continued backing comes despite the fact Mr Mueller’s prosecutors once praised him as a model co-operator in their probe into ties between Russia and the 2016 Trump campaign.

The pardon is the final step in a case defined by twists and turns over the last year after the Justice Department abruptly moved to dismiss the case.

Officials insisted Flynn should have never been interviewed by the FBI in the first place, only to have US District Justice Emmet Sullivan refuse the request and appoint a former judge to argue against the federal government’s position. 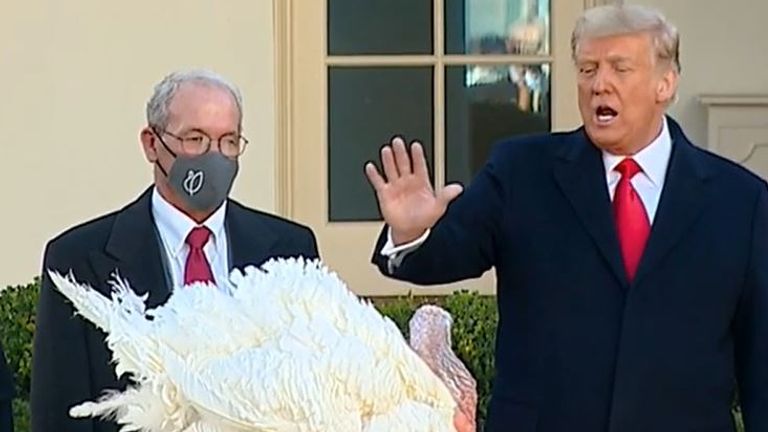 Flynn’s lawyer Sidney Powell told the judge in September that she had discussed the case with Mr Trump but also said she did not want a pardon – presumably because she wanted him to be vindicated by the courts.

Ms Powell emerged separately in recent weeks as a public face of the Mr Trump’s efforts to overturn the results of his election loss to president-elect Joe Biden, but the defeated leader’s legal team ultimately distanced itself from her after she promoted a series of uncorroborated conspiracy claims.

The pardon spares Flynn the possibility of any prison sentence, which Mr Sullivan could potentially have imposed had he ultimately decided to reject the Justice Department’s dismissal request.

Wednesday could well be summarised as one of chaos and contradiction from the Trump camp.

While the president’s actions seem to be tacitly acknowledging the reality that he lost the general election and that his one term as president is drawing to a close, his words, still, do not.

It wasn’t much of a surprise when he tweeted that he would extend a presidential pardon to his former National Security Advisor General Michael Flynn.

Yet just hours before pardoning Flynn he used a mobile phone call to supporters at a hearing of the Pennsylvania State Senate to insist that “this is an election that we won easily. We won it by a lot”.

Flynn pleaded guilty to lying to the FBI about conversations with a Russian diplomat just before Trump took office. The charge came to light as part of the Robert Mueller investigation into Russian interference in the 2016 presidential election.

Trump was incensed at the very existence of the Mueller investigation, he’d already hinted he would pardon Flynn and he certainly hasn’t shied away from pardoning his political allies in the past.

But while the recipient was predictable the pardon itself is still an interesting signal as to how the president sees his position.

Presidential pardons, particularly to allies, are usually a last hoorah; some of the final things a leader does before they leave office.

When seen alongside his move earlier this week to finally allow the formal presidential transition to begin, you could almost conclude that Donald Trump has resigned himself to reality and may even go quietly.