Having lost in excruciating fashion too many times previously when they squandered fourth-quarter leads, the Atlanta Falcons finally held on. Clinched within the grasp of a Blidi Wreh-Wilson interception, the Falcons held off the Carolina Panthers, 25-17, for a win on “Thursday Night Football.”

1) Refusing to go gentle into the offseason, the Falcons battled into a goodnight on Thursday and it was a much-maligned defensive backfield that came up clutch and fended off another fourth-quarter collapse. The only takeaway of the evening for the Falcons was Blidi Wreh-Wilson‘s interception of Teddy Bridgewater on the Panthers’ last gasp of a drive. The Wreh-Wilson pick expunged any hopes of a Carolina comeback and likewise did away with another Atlanta freefall. While finding new and unspeakable ways to lose in the fourth quarter has been the story of the Falcons season, so too has been poor play from the defensive backfield, one mired by injuries and a major reason the Atlanta defense was 31st against the pass entering Thursday. But the Panthers mustered just 179 yards passing, Carolina receivers D.J. Moore and Robby Anderson combining for only seven catches for 103 yards after they teamed up for 12 catches for 205 yards in the teams’ earlier meeting. Grady Jarrett led a pass rush that pressured Bridgewater often and sacked him three times and Keanu Neal, Wreh-Wilson and A.J. Terrell did just enough in the defensive backfield to hang on. The Falcons (2-6) quite certainly have remaining issues with closing out victories, but against the Panthers (3-5), Atlanta’s defense made a stand and staved off another crushing defeat.

2) Bridgewater was on his way to one heckuva comeback story, but unfortunately for him and the reeling Panthers, the Falcons flipped the script. Bridgewater was efficient early, but faltered late. Then he took a big (and illegal) hit from Charles Harris and his return was in doubt. After a cameo from P.J. Walker, Bridgewater returned and the stage was set for Teddy B’s dramatic performance. It was aided by another time-wasting run from Todd Gurley and a missed PAT by Younghoe Koo, but it was there nonetheless. And then, as aforementioned, Wreh-Wilson took it away. Bridgewater finished with a line of 15-for-23 for 176 yards, a touchdown on a flea-flicker to Curtis Samuel, an interception and an 84.7 rating. Bridgewater has found the right spot in Joe Brady’s offense on Matt Rhule’s team, but he’s still a work-in-progress it would seem. He had a poor showing in Week 6 and rebounded in Week 7. After Thursday, he needs to rebound again.

3) In a far better time for the Falcons called the 2016 season, Julio Jones put up an all-time effort in a win over the Panthers, racking up 300 yards receiving in a Week 4 outing. While the Falcons have most certainly seen better days, Jones continues to consistently terrorize the Panthers. In Carolina’s franchise history, only two players (with a minimum of five matchups) have averaged 90-plus yards receiving against the Panthers: Jones and Calvin Ridley — per NFL Research. Ridley was lost before halftime with an ankle injury, but Julio was Julio. He finished the night with a game-high seven catches for a game-high 137 yards. It’s been a trying season for Jones – the losses, the injuries and the trade rumors. But Julio’s still one of the game’s best.

4) When Christian McCaffrey went down with an injury, Curtis Samuel became a candidate for a bigger role not just as a receiver, but as a rusher. Samuel showcased that dual-threat ability on Thursday, tallying touchdowns on the ground and through the air for the third time in his career. Since he was drafted in 2017, Samuel’s the only wide receiver with multiple games with rushing and receiving scores, per NFL Research. It’s an added weapon for Brady’s offense, but it will be interesting to see how big a part of the Panthers arsenal Samuel plays when CMC returns – which might well be next week.

5) In case you hadn’t noticed — and judging by the record, you didn’t — Matt Ryan came into Week 8 leading the NFL in passing. In the odd world that is pro football, Ryan didn’t light it up passing on Thursday, but the Falcons won. Nonetheless, Ryan did his part and then some. It was really a rather ugly game on both sides, a rainy affair between NFC South squads still searching for their identities despite reaching the midway point of the season. Ryan had a rushing touchdown, 281 yards passing, an interception and an all-around mixed bag. But quarterbacks are judged by leading their teams to victories as much as they are their statistics — more often, more so. Ryan might well have let down some his fantasy teams, but he bolstered the Falcons’ winning cause by doing whatever he had to.

6) The Falcons have had the ridiculous misfortune of finding different — though all of them heartbreaking — ways to grab defeat from the jaws of victory. A win was had on Thursday, but oh how close Atlanta was to once more finding a way to fall in the final stanza. The Panthers were on a game-tying drive only because Koo had missed an extra point. That missed PAT came after Gurley scored a touchdown. Gurley, of course, took on the blame for the previous week’s loss to the Lions when his momentum carried him into the end zone for a touchdown. Had he stopped short of the end zone, the Falcons likely could have run down the clock and had Koo kick a chip shot for the ‘W.’ This week, the Falcons had a chance to run out the clock again — or at least more of it. Instead, Gurley was pushed out of bounds with just more than three minutes left on a third-and-14 run. To call it puzzling is likely an understatement as Gurley — who’s been part of a Super Bowl run with the Rams, mind you — made another mistake with the clock. It’s doubtful the Atlanta Braves have ever needed a closer as badly as the Atlanta Falcons do. But on this night, they survived. Still, these fourth-quarter ills must still be remedied.

7) A complicated game gets rather plain and simple when it comes to the final score. Plain and simple, the Panthers needed this one and they didn’t get it. A rebuilding franchise that got off to an impressive start, Rhule’s Panthers are now in the midst of a three-game losing streak and headed on the road to face the reigning Super Bowl-champion Chiefs. After that, they’ve got the Buccaneers. Any shot of making a realistic playoff push was likely extinguished with Wreh-Wilson’s interception. Now, the likely question looms about McCaffrey’s return and how important it is to have one of the NFL’s best talents and the face of the (rebuilding) franchise come back when a postseason ticket is all but mathematically gone.

Carolina exited “Thursday Night Football” with its third narrow loss in a row. But a close call avoided by its QB1 is an encouraging takeaway worth highlighting. 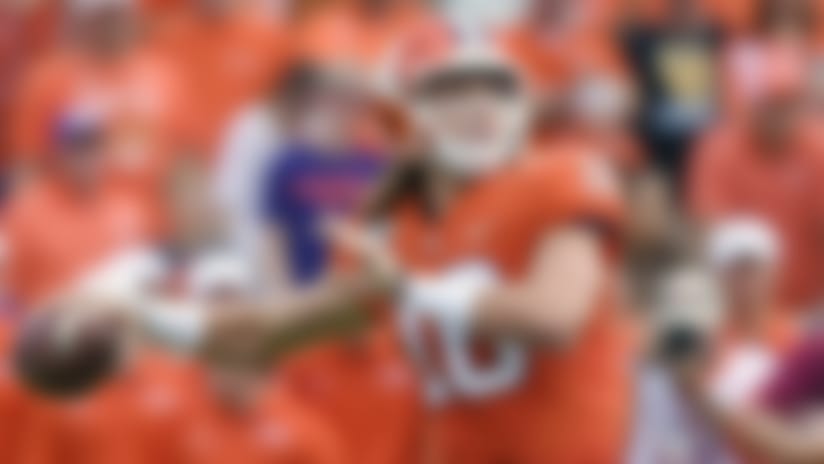 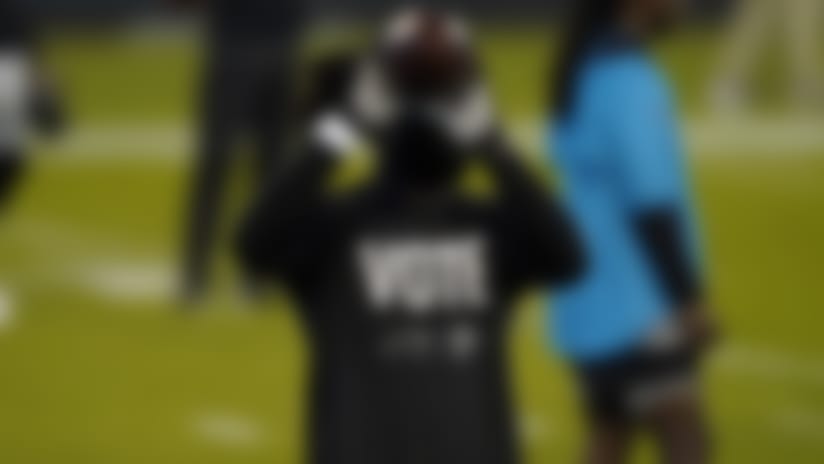 Ahead of their meeting on “Thursday Night Football,” Falcons and Panthers players donned “Rock the Vote” shirts in warmups, their hope of bringing about change emblazoned upon them. 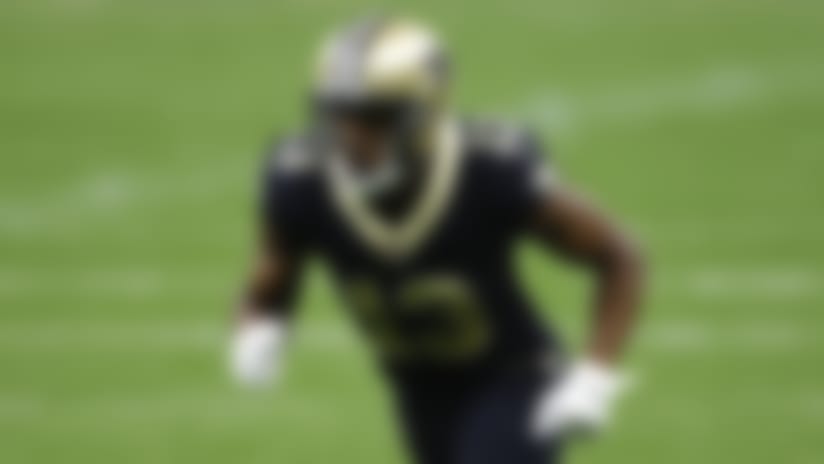 After missing the last several practices due to lingering ankle and hamstring issues, Saints star receiver Michael Thomas made his anticipated return to practice.

The New England Patriots will look to break their three-game losing streak minus their top wide receiver. Julian Edelman will miss Sunday’s game at the Bills after undergoing a knee procedure. 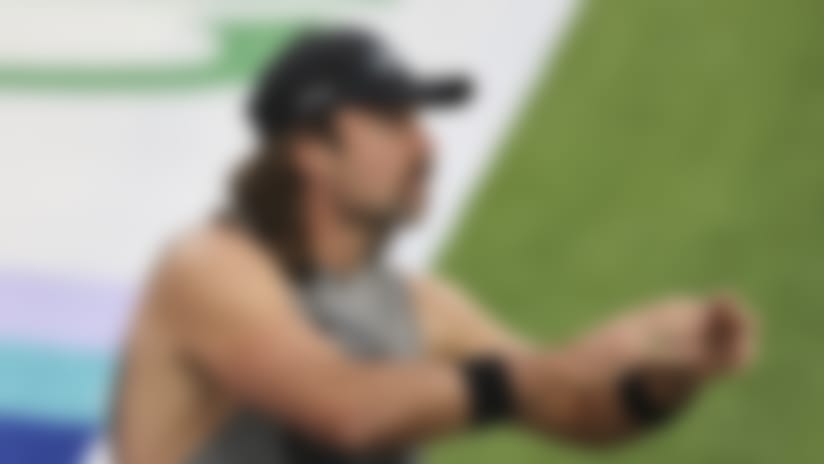 Jaguars quarterback Gardner Minshew has a sprain and small break in his throwing thumb, Ian Rapoport reported. His status is uncertain when they return from bye. 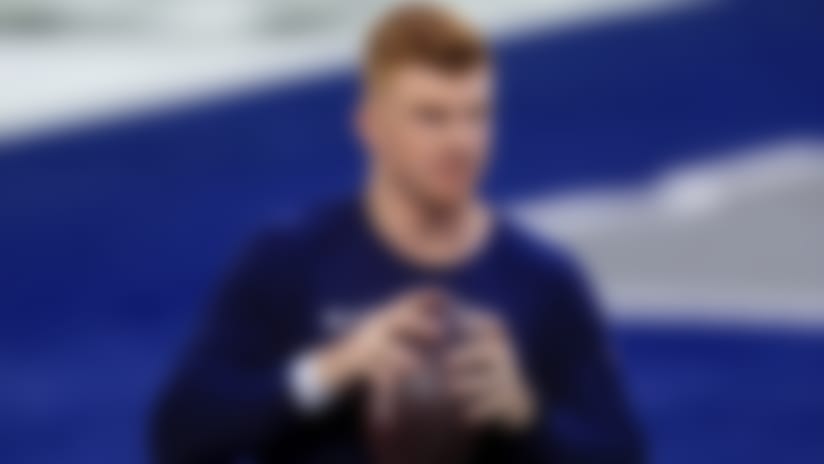 Dallas Cowboys quarterback will not practice today as he remains in the concussion protocol, coach Mike McCarthy told reporters. Here are other injury and roster news we’re tracking on Thursday. 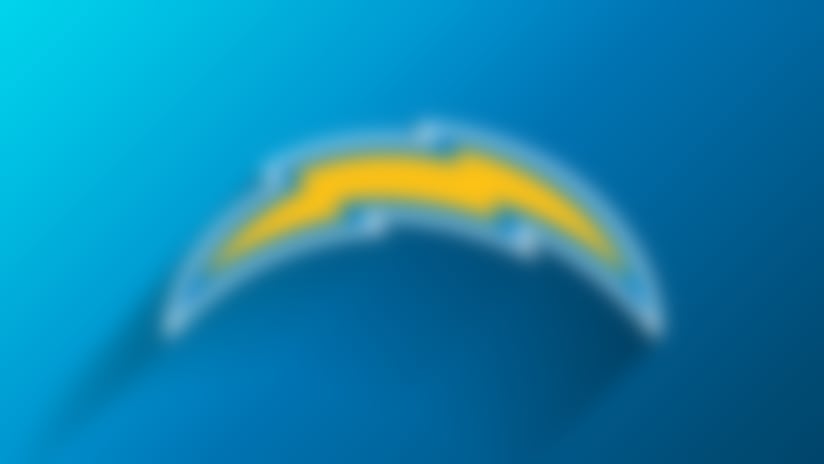 The Los Angeles Chargers were already dealing with wildfires. Now Anthony Lynn’s team has a COVID-19 issue to maneuver around. A Chargers player tested positive for COVID-19, and he and all close contacts were told to stay home and isolate.

The New York Giants are dealing with a positive COVID-19 test. The team announced Thursday morning that a player tested positive for COVID-19. The player and his close contacts are not in the building, while the rest of the team preps for Monday night’s game against the Tampa Bay Buccaneers. 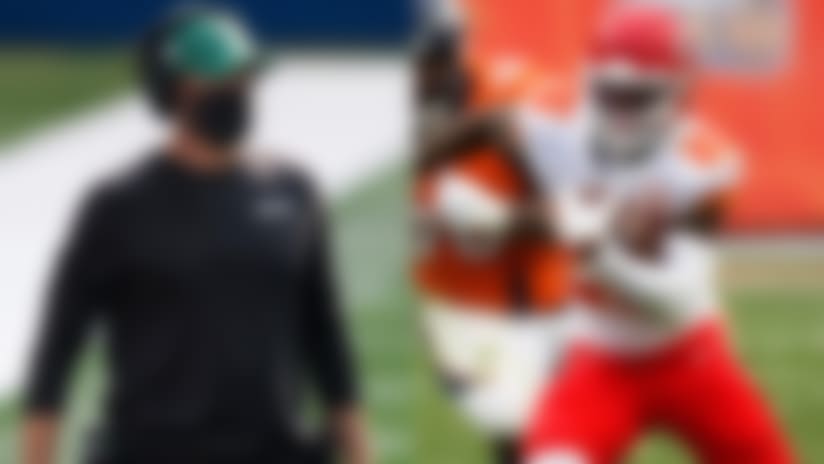 The Chiefs host the Jets on Sunday and coach Adam Gase is not focused on his former running back Le’Veon Bell. He’s focused on getting their first win of the season. 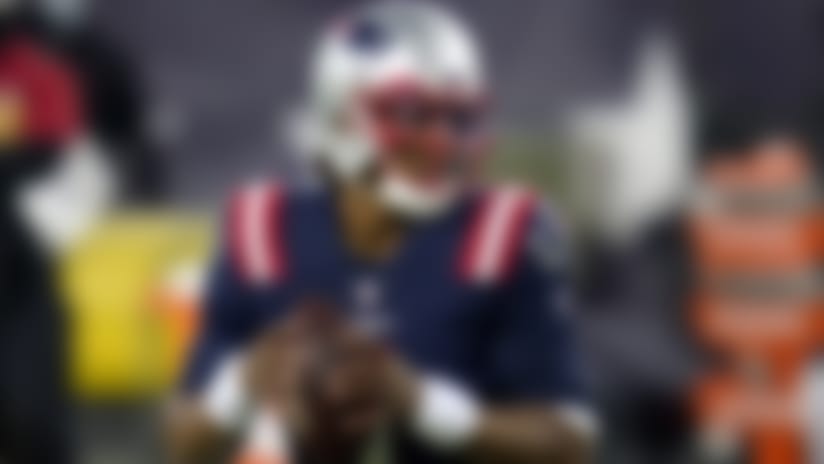 McDermott on Cam Newton ahead of AFC East showdown: We know what he’s capable of

Bills coach Sean McDermott was the defensive coordinator when Cam Newton played for the Panthers and knows what the now Patriots QB is capable of.