Secret Service agents, intelligence briefings and $200k a year for life: Trump’s perks as an ex-president

White supremacist extremism is the most lethal terrorism threat to the United States. It’s a hateful ideology that the Guardian’s Lois Beckett says has infected many parts of American society

How to listen to podcasts: everything you need to know

In May 2017, Demetria Hester was on her way home from work on a train in Portland, Oregon when Jeremy Christian, an avowed white supremacist, boarded and began shouting racist abuse. She says she told him to shut up. When they had got off the train, he threw a bottle that struck her in the face. The next day he killed two men and grievously injured a third. Demetria describes to Anushka Asthana how she felt the police responded to the incident that night and how she watched her attacker walk away without being questioned.

Earlier this year, a court in Portland found Jeremy Christian guilty of two counts of first-degree murder and one count of first-degree attempted murder and sentenced to life without parole. But as the Guardian’s Lois Beckett tells Anushka, this is the extreme end of an ideology that has permeated all parts of US society, and that President Trump has repeatedly refused to condenm.

As American’s go to the polls next week they must assess the record of a president who has professed to be the “least racist person”. His own Department of Homeland Security describes white supremacists as posing the most persistent and lethal terror threat in the country. 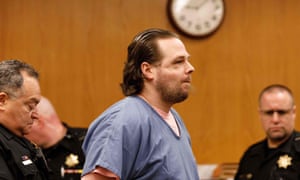 The Guardian is editorially independent. And we want to keep our journalism open and accessible to all. But we increasingly need our readers to fund our work.