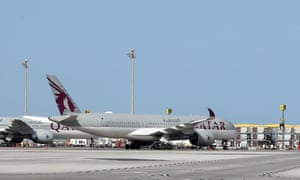 A New Zealand woman was intimately examined at Qatar’s Doha airport along with more than a dozen other women. Photograph: Karim Jaafar/AFP/Getty Images

New Zealand has revealed one of its citizens was among the women subjected to invasive pelvic examinations at Doha airport, labelling the action “completely unacceptable”.

“We were extremely concerned to learn … that a New Zealand national was involved in the appalling incident involving female passengers on several Qatar Airways flights,” the foreign affairs ministry said in a statement late Thursday.

“This action was completely unacceptable. We are making our views known to Qatari authorities and are seeking a full report on what occurred.”

Women on 10 flights out of Doha were subject to the examinations as authorities in the ultra-conservative Gulf state searched for the mother of a newborn baby found abandoned in an airport bathroom.

Qatar said Wednesday it “regrets any distress” over the incident, which occurred in early October but only came to light this week after affected Australian passengers spoke out.

Australia has since said 13 of its citizens had to endure the “appalling” examinations, Britain said it is providing support for two women and AFP has learned a French woman was also affected.

In its first account of events, Qatar said the baby girl was wrapped in plastic and left to die in a bathroom rubbish bin, prompting what sources said was a lockdown of the airport.

Women were then led from aircraft to ambulances on the tarmac where they were subject to cervical examinations to see if they had recently given birth.

Qatar has launched an investigation into the incident, which involved women on 10 flights, and sources say those involved could face criminal prosecution.