Falcons’ Ryan: Win could be ‘start of something’

Saudi Arabia to use G20 leadership to coordinate COVID-19 response

451: Unavailable due to legal reasons

Who will win the 2020 US election? Bookies odds and latest polls 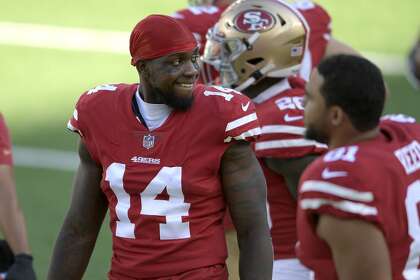 It did not appear to bode well for Mohamed Sanu’s career prospects when the Patriots released the 31-year-old wide receiver last month less than a year after surrendering a second-round pick for his services.

And Tuesday’s transaction offers more evidence that Sanu’s best days are officially behind him: The 49ers, who aren’t teeming with wide receiver depth, released the nine-year veteran after he had one catch and played 40 snaps in three games, a league source said.

The 49ers presumably made the move because wide receiver Richie James Jr. is expected to be removed from injured reserve this week. However, they would have retained Sanu, the most experienced and accomplished member of their wide receiver corps, if he could have provided a boost.

Pettis does not have a reception this season and has been targeted with one pass in 63 snaps. He did not play on offense in a 25-20 loss to the Eagles on Sunday night, while Sanu played seven snaps. James, the team’s primary kick returner last year, is a 2018 seventh-round pick who has 15 career receptions.

The Patriots released Sanu on Sept. 3 amid reports that he had a lackluster training camp after underdoing offseason ankle surgery.

Head coach Kyle Shanahan, who was with Sanu in 2016 when he was Atlanta’s offensive coordinator, said the extra time required to sign players because of coronavirus-testing protocols was the reason the 49ers didn’t bring Sanu in for a workout. Sanu played in a win against the Jets on Sept. 20, two days after he officially signed.