Nearly 16,000 people who tested positive for the coronavirus disappeared from the records, another embarrassing failure for a much-criticized effort.

Nearly 16,000 people who tested positive for the coronavirus were not recorded in Britain’s daily number of reported cases for a test and trace program.

Mr. Speaker, I want to take the first available opportunity to set out to the House the technical issue around case uploads discovered by Public Health England on Friday evening. This is an ongoing incident, and I come to the House straight from an operational update from my officials. On Friday night, Public Health England identified that over the previous eight days, 15,841 positive test results were not included in the reported daily cases. This was due to a failure in the automated transfer files from the labs to P.H.E.’s data systems. Mr. Speaker, this incident should never have happened. But the team have acted swiftly to minimize its impact, and now, it is critical that we work together to put this right, and to make sure that it never happens again. I want to reassure the House that outbreak control in care homes, schools and hospitals has not been directly affected because dealing with outbreaks in these settings does not primarily rely on this particular P.H.E. system. The chief medical officer has analyzed that our assessment of the disease and its impact has not substantially changed as a result of these data, and the J.B.C. has confirmed that this has not impacted the basis on which decisions about local action were taken last week. Nevertheless this is a serious issue, which is being investigated fully. 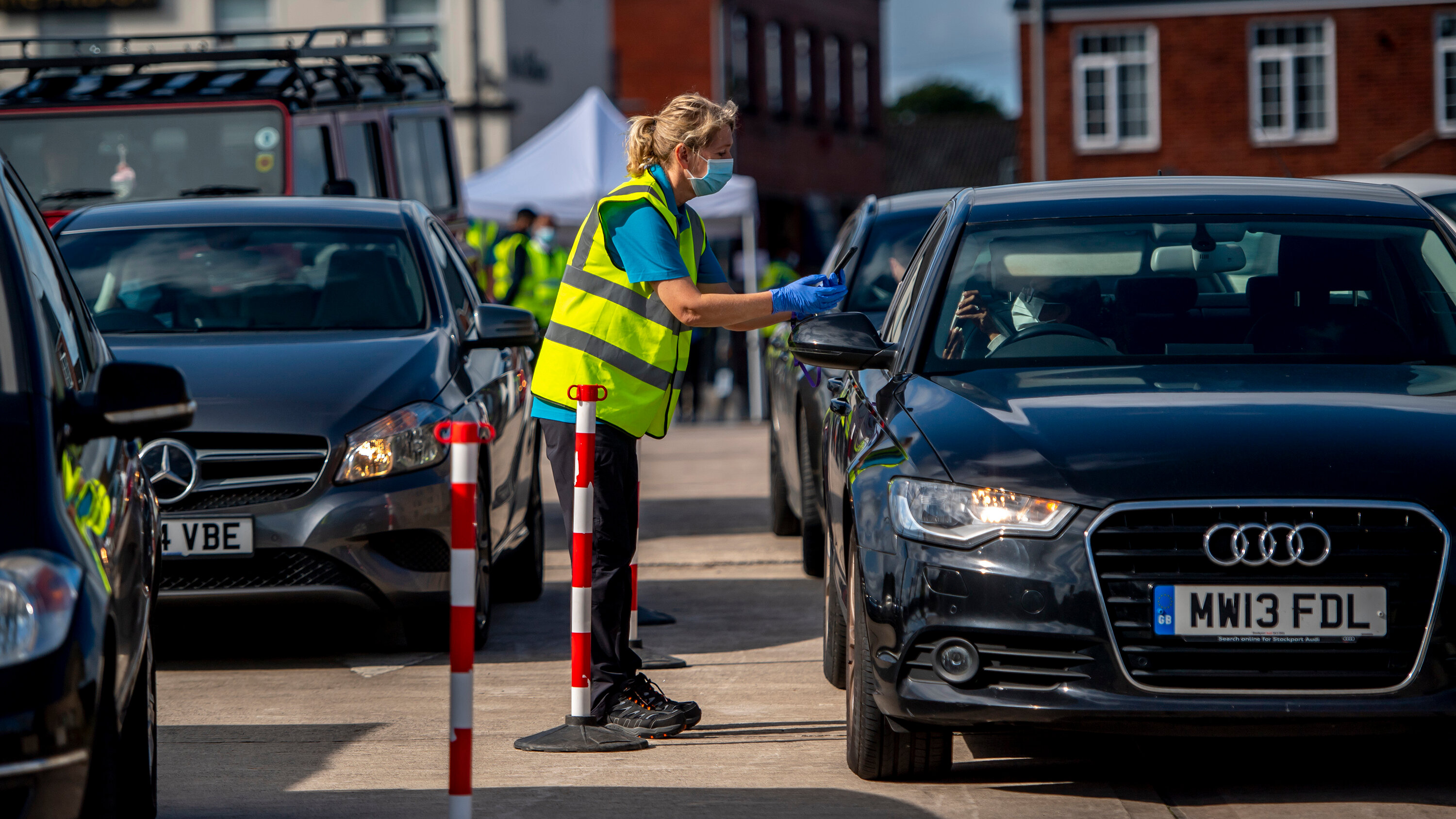 Nearly 16,000 people who tested positive for the coronavirus were not recorded in Britain’s daily number of reported cases for a test and trace program.CreditCredit…Anthony Devlin/Getty Images

Nearly 16,000 people who tested positive for the coronavirus between Sept. 25 and Oct. 2 were not recorded in the nation’s daily number of reported cases, producing an artificially low picture of the spread of the virus and delaying efforts to trace those with whom the infected people had been in contact.

The disclosure brought a storm of criticism on the Johnson government, which has been on the defensive for its haphazard handling of the pandemic since March, when Mr. Johnson hesitated for days before imposing a nationwide lockdown. More than 57,000 people have died from the virus in Britain, the highest number in Europe, and the country is now facing a second wave of infections.

“This incident should never have happened,” the health secretary, Matt Hancock, said to Parliament on Monday, promising that the government would conduct an investigation and upgrade its outmoded computer systems.

That did not mollify the opposition Labour Party, which seized on the latest glitch as evidence of the government’s serial incompetence. “This isn’t just a shambles,” said the Labour shadow health secretary, Jonathan Ashworth, jabbing his finger at Mr. Hancock. “It is so much worse than this.”

Image Britain’s health secretary, Matt Hancock, promised that the government would conduct an investigation and upgrade its computer systems.Credit…David Cliff/NurPhoto, via Getty Images

For a pandemic-ravaged country, the computer error was not the only bit of unnerving news. Government officials said that fewer than half of Britons should expect to be vaccinated, even after a vaccine was widely available.

Britain’s goal is to vaccinate about 30 million people, less than half the population, the head of the government’s vaccine task force, Kate Bingham, told the Financial Times. The priority would be the most vulnerable people, hospital and nursing-home workers, and those over the age of 50. Children and young people, who are considered less at risk from the disease, would not be vaccinated.

The data-entry error, officials at Public Health England said, occurred because some of the Excel files containing the names of people who tested positive were too large to transfer to a central computer system. When they were transferred, the system simply lopped off a chunk of the names. Officials said they fixed the problem by splitting up the files and transferring smaller amounts of data.

The glitch did not affect when people were informed of their positive test results, according to officials. Nor did the missing data prevent the government from imposing restrictions in hard-hit parts of the country. But it did delay the contact-tracing process, which depends on rapid response to be effective in curbing the spread of the virus.

“The timing of it couldn’t be worse,” said Devi Sridhar, the director of the global health governance program at the University of Edinburgh. “You’re heading into winter, and we already knew that cases were rising. This is really when you’d need your test-and-trace system to do its work.”

Instead, she said, virtually every part of the system has broken down. Apart from the data error, people were being sent to testing sites hundreds of miles from where they lived, and tests came back from the labs too slowly amid a huge backlog of untested samples.

Public compliance with the program has remained sluggish: In a survey of 32,000 people living in Britain, less than one in five people who reported coronavirus symptoms said they had stayed home. Of those alerted that they had been close to an infected person, only one in 10 said they had complied with orders to self-isolate.

Britain reported 12,594 new cases on Monday — a number that did not include the backdated cases, which had been added to Sunday’s numbers.

Many of the new cases are in the northwest, in cities like Manchester, where there are large numbers of university students. Officials said that adding back the missing cases brought the rate of spread to within the government’s projections.

“To be frank, I think that the slightly lower numbers that we’d seen didn’t really reflect where we thought that the disease was likely to go, so I think these numbers are realistic,” Mr. Johnson said to reporters on Monday.

Prime Minister Boris Johnson has tightened coronavirus restrictions in Britain in response to increased cases in September.Credit…Neil Hall/EPA, via Shutterstock

The prime minister’s subdued response belied the dangerous moment Britain faces, with cases rising and the country still unable to get an accurate gauge on where, and how quickly, the virus is spreading.

Pouncing on local outbreaks depends on testing and tracking cases down to the level of single office buildings and neighborhoods. But almost since England’s contact tracing program was unveiled in May, it has been bedeviled by problems with access to testing data, making it impossible in some cases for local officials to keep track of the virus.

For weeks, a network of privately run testing sites processed tens of thousands of daily tests, and the government did not share detailed results with local officials. Only testing results from public hospitals were being quickly shared.

Public health officials said they were left to catch wind of outbreaks from the news. Local council officials pleaded for location-specific testing results, only for the central government to deny them on the grounds that they had not signed the proper data protection agreements.

Those delays especially gnawed at local officials in northern England, where infection rates remained higher than in London when the nationwide lockdown was lifted, leaving them exposed to higher risk before an effective data-sharing system was in place.

In Leicester, where the central government imposed a second lockdown in late June, officials said that the government had denied them testing data on the grounds that “it hadn’t been cleaned.” Government officials said the data processing had not yet been automated at that point, causing delays, which local officials said led to a surge in cases.

Some local officials bristled on Monday at having been denied access to testing results because of data security policies while the contact tracing program was in fact, according to British news reports, storing test results in Excel spreadsheets.

The magazine New Scientist later reported that an internet outage in southern England had created problems with the contact tracing program’s digital infrastructure, causing delays of up to a week in tracers being able to call the contacts of thousands of newly infected patients.