This moment is certainly unique: A pandemic that has paralyzed normal life, a president hospitalized with a virus, and a public unsure who or what to trust. But this moment is also informed by years of deja vu context.

Think about it: Questions about whether Donald Trump’s doctors are telling the whole truth? These questions pre-date his inauguration.

Concerns about the White House’s complete lack of credibility? Those concerns have been a daily feature since January 2017.

Distress about the dysfunctional leadership at the top of the federal government? Again, since 2017.

So I had deja vu when I read this headline atop Julie Pace’s story for The Associated Press: “Trump faces credibility crisis over health scare.”

And this headline on Niall Stanage’s column for The Hill: “Trump grapples with credibility gap in crisis.”

That gap has deepened every day Trump has been in office. It is definitely not a new story. But it still bears repeating at times like this, when the White House desperately needs to be believed.

As Pace wrote, “credibility in a crisis is paramount” for any president, “yet Trump has squandered widespread credibility from the very start of his presidency, spending his first full day in office disputing official tallies of the crowd size at his inauguration and asking Americans to disregard photographic evidence showing that he drew fewer people to the National Mall in Washington than his predecessor.”

It is clear now that the president was much, much sicker than the White House admitted on Friday. The lies, a defining characteristic of the Trump years, are piling up yet again. 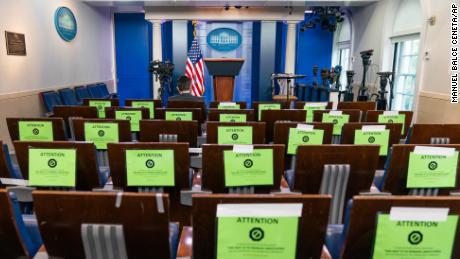 Newspapers and news websites are full of stories about what CNN’s Kevin Liptak and Kaitlan Collins called an “astonishing gap in Americans’ knowledge of their leader’s health.” Well-placed government officials have been kept in the dark too — another sign of the dysfunction that has bedeviled the Trump administration since day one.

So the feeling of deja vu is real in more ways than one.

CNN Business Managing Editor Alex Koppelman pointed out another example of this phenomenon on Saturday: When ESPN broke the news on Saturday that Patriots quarterback Cam Newton had tested positive, Koppelman tweeted, “This is really starting to feel like the Tom Hanks/Rita Wilson/NBA week back in March.”

Indeed, the newfound anxiety about the unsparing nature of the coronavirus — with so many Republican leaders getting sick — was reminiscent of mid-March, when household names were infected and the gravity of the pandemic suddenly set in.

“Except, of course,” Koppelman wrote, “that there’s little hope this time that leaders will suddenly realize they need to take this thing more seriously.”

A version of this article first appeared in the “Reliable Sources” newsletter. You can sign up for free right here.