Less than seven weeks before Election Day, the White House finds itself trying to grapple with credible allegations that official reports and information were fudged, doctored or suppressed to keep President Donald Trump from looking bad.

Veteran Department of Homeland Security official Brian Murphy says in a sworn complaint that he was told by acting Secretary Chad Wolf to stop intelligence reporting on the threat of Russian interference in the U.S., per White House direction. The DHS, Murphy said, also downplayed security threats from white supremacists.

On Tuesday, it was reported that the DHS is refusing to agree to the House Intelligence Committee’s request to interview official witnesses, as part of the panel’s investigation of the department’s unorthodox response to protests in Portland, Oregon.

While that scandal has been roiling for a week, another with a similar theme is gaining in gravity. Trump loyalists assigned to the Department of Health and Human Services have sought to doctor the Centers for Disease Control and Prevention’s statistical reporting on the coronavirus toll, as reported last week by Politico and The New York Times.

The Trump appointee who reportedly led that effort, the HHS’ top communication official, Michael Caputo, apologized to staff Tuesday for fabricating “sedition” claims he made against them and hinted that he’ll soon go on leave. Caputo has been spinning dark and far-fetched conspiracy theories about the upcoming election, evoking left-wing hit squads. Caputo’s departure wouldn’t be good enough for Senate Minority Leader Chuck Schumer (D-N.Y.), who has demanded the resignation of HHS Secretary Alex Azar. Schumer said Tuesday that “too many people within HHS are trying to suppress the science” of COVID-19.

Meanwhile, Trump trade adviser Peter Navarro is refusing to testify before a House subcommittee about a canceled contract for ventilators that Democrats say would have wasted more than $500 million. Details are sketchy. Halting federal efforts to help hospitals and individuals cope with the pandemic have embarrassed the administration for months.

To shore up his patter about “turning the corner” on the coronavirus, Trump on Tuesday told receptive “Fox & Friends” hosts that vaccine approval is coming “in a matter of weeks. It could be four weeks, it could be eight weeks.”

This amounts to another optimistic non-announcement. Dr. Anthony Fauci, the government’s top infectious disease expert, has said all along that the realistic target date for federal approval of a vaccine candidate would be the end of this year or the beginning of next year. But Adar Poonawalla, chief executive of the world’s largest vaccine manufacturer, Serum Institute of India, said that even with swift trials and approvals, there will not be enough for everyone until the end of 2024.

The U.S. death toll from COVID-19 this week rose past 195,000. Arguing that Trump has failed to realistically confront the pandemic, the Scientific American magazine announced support for Joe Biden, the first presidential endorsement in the publication’s 175-year history. “The evidence and the science show that Donald Trump has badly damaged the U.S. and its people — because he rejects evidence and science,” the editorial said. 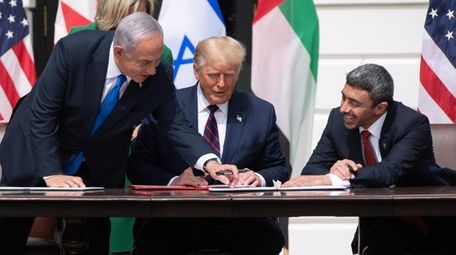 Israeli Prime Minister Benjamin Netanyahu and the foreign ministers of United Arab Emirates and Bahrain joined Trump at the White House on Tuesday to mark the formal signing of new diplomatic accords.

The pact normalizes relations with an establishment of embassies. Until now, Israel had normal relations with only two other Arab states, Jordan and Egypt, but has been moving for years toward alliances with Persian Gulf states against their rival Iran.

Trump said on Fox that he would “have absolutely no problem” selling the F-35 fighter jet to the UAE. Israel has agreed to put off its plan to annex parts of the West Bank. House Speaker Nancy Pelosi said of the business pacts: “Hopefully they’re beneficial to the region,” but she added they’d help Trump distract from his handling of the pandemic. Trump gave Netanyahu a gold ceremonial token, which he said was “a key to the White House.”

In a 90-minute ABC town hall, prerecorded in Philadelphia and aired Tuesday night, Trump faced questions from everyday citizens who happen to be undecided voters. Many of his replies were familiar, some of them more unusual, but the special presentation became a public works project for fact-checkers.

Asked about his deceptive early downplaying of the deadly pandemic, Trump offered a bit of his usual cant about not wanting to “panic” people, but then claimed he “up-played it” in terms of action. Even without a vaccine, he said, the virus goes away “with time” due to “herd mentality.” (Freudian? He clearly meant to say “herd immunity,” which indeed would occur with time and more lives lost.)

Falsehoods came out of Trump’s mouth in rapid succession: that nobody knew at first that seniors were susceptible; that there were no ventilators left from before he took office; that Democrats, who created protections for preexisting conditions, wouldn’t assure them; that economic inequality was waning when the pandemic hit; and “a lot of people think the masks are no good,” particularly “waiters.” He also said New Yorkers were safer under Rudy Giuliani — he was mayor from 1994 to 2001 — than they are now, which no crime statistics bear out, and that he didn’t praise China for weeks for its COVID response, which he did.

See this ABC News roundup for a more extensive list of reality checks. (Click here for a full transcript.)

What does he hear?

One tearful woman at the town hall, Flora Cruceta, who moved from the Dominican Republic to Harrisburg, Pennsylvania, asked Trump about his plans for a path of citizenship for immigrants, a question on behalf of her mother, who died of cancer. Trump talked past all that and strangely said, “Did YOU have COVID? You didn’t have it, right? Your mother. Uh, we’ll have it taken care of … “

Trump added: “We are doing something with immigration that I think is going to be very strong, because we want people to come in to our country, people like you … “ 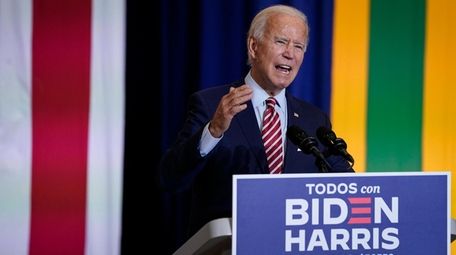 Biden answered questions and made his pitch for 90 minutes in a town hall meeting with armed forces veterans in Tampa, Florida, a state where polls have him running neck and neck with Trump. Biden discussed programs for veterans’ education and health and sought to be a sympathetic contrast to Trump’s cold private remarks about those who served and died.

Later, at an event kicking off National Hispanic Heritage Month in Kissimmee, Biden unveiled a plan for Puerto Rico to create a group that will answer directly to him and invest in the island’s recovery — also in contrast with Trump’s relatively blithe posture toward crises in the U.S. commonwealth.

Biden’s running mate, Sen. Kamala Harris, returned to her home state of California for the first time as a vice-presidential nominee Tuesday. She met with Gov. Gavin Newsom in wildfire-devastated Fresno, where they examined the remnants of a grade school and visited with workers at a Red Cross shelter and a fire station.

Trump also told Woodward, as recorded in audio played in CNN’s interview Tuesday with the author, about a time a man’s sneeze emptied an Oval Office meeting during the coronavirus pandemic. Remarkably, the president has seen fit to break states’ health rules by shunning face coverings and holding large rallies without social distancing, against all precautionary advice.

See a roundup of the latest pandemic developments from Long Island and beyond by Newsday’s reporting staff, written by Bart Jones. For a full list of Newsday’s coronavirus stories, click here.

What else is happening: