Kari Paul here in the San Francisco Bay area, taking over the blog for the next few hours. Stand by for more updates.

That’s it from me today. My west coast colleague, Kari Paul, will take over the blog for the next few hours.

Here’s where the day stands so far:

Kari will have more coming up, so stay tuned.

Michael Caputo, the assistant secretary of public affairs at the department of health and human services, reportedly accused scientists at the Centers for Disease Control and Prevention of “sedition” over their response to the coronavirus pandemic.

According to the New York Times, Caputo claimed (without any evidence) that CDC officials were forming a “resistance unit” aimed at undermining Trump.

“You understand that they’re going to have to kill me, and unfortunately, I think that’s where this is going,” Caputo said in a live video hosted on his personal Facebook page.

“And when Donald Trump refuses to stand down at the inauguration, the shooting will begin,” Caputo said. “The drills that you’ve seen are nothing. … If you carry guns, buy ammunition, ladies and gentlemen, because it’s going to be hard to get.”

Caputo has recently weathered severe criticism after Politico obtained emails showing the official had sought to change key CDC reports on coronavirus, even complaining that the reports “would undermine the president’s optimistic messages about the outbreak.”

During the briefing on the west coast wildfires, Wade Crowfoot, the secretary of California’s Natural Resources Agency, emphasized that climate change was exacerbating the crisis.

“We want to work with you to really recognize the changing climate and what it means to our forests, and actually work together with that science,” Crowfoot told Trump.

“If we ignore that science and sort of put our head in the sand and think it’s all about vegetation management, we’re not going to succeed together protecting Californians.”

The president has previously suggested the recent surge in wildfires was attributable to poor forest management, rather than record levels of heat and drought, as climate experts have said.

“I wish science agreed with you,” Crowfoot replied.

Shortly after that exchange, Crowfoot sent a tweet with a graphic showing the rise in California’s average temperature in recent decades.

When Gary Cohn was Donald Trump’s top economic adviser, according to Bob Woodwards first Trump book, Fear, he made sure key pieces of paper were removed from the president’s desk, lest he enact policies Cohn thought would be catastrophic. 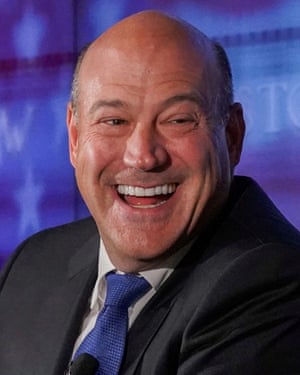 When Trump said there were “very fine people” on both sides of a white nationalist rally in Charlottesville, Virginia at which neo-Nazis chanted “Jews will not replace us” and a counter-protester was murdered, Cohn, who is Jewish, broke with the president and came close to resigning.

When Cohn did quit the Trump White House, he said it was over Trump’s love for tariffs which, as a free-trader, he could not support.

Cohn is a Democrat, and the country is less than two months out from a presidential election which the Democratic nominee, Joe Biden, has cast as an existential battle with a “climate arsonist” president.

Cohn has also watched, with the rest of America, more than 190,000 die from a pandemic the president knew was a severe threat, but chose not to tell the country so immediately. He has watched the US economy tank, under the impact of that pandemic.

But Cohn told CNBC today he wasn’t sure who he will vote for in November:

“You know, I honestly haven’t made up my mind. I’m really eager to see an economic debate between the two of them. I actually vote on issues.

During the briefing on the west coast wildfires, multiple officials, including California governor Gavin Newsom, said climate change was exacerbating the disaster.

As one official made this argument, Trump interrupted to say, “It will start getting cooler.”

However, climate experts have warned the planet will continue to get hotter if greenhouse gas emissions are not curtailed.

But Trump told the officials at the briefing, “Just watch. I don’t think science knows actually.”

Trump is now attending a briefing on the west coast wildfires, with California’s Democratic governor, Gavin Newsom, and state and federal officials involved in the wildfire response.

As the briefing got underway, Trump said of Newsom, “I know we come from different sides of the planet, but we have a great relationship.”

Newsom acknowledged the need for improved forest management, which Trump has called for, but the governor added, “We come to the perspective, humbly … that climate change is real and that is exacerbating this.”

The president nodded in response but did not directly address Newsom’s comment.

After landing in California, Trump blamed the recent devastating wildfires on poor forest management, which the president said can cause exploding trees.

“When trees fall down after a short period of time — about 18 months — they become very dry. They become really like a matchstick,” Trump told reporters after Air Force One landed in Sacramento.

“They just explode. They can explode. Also leaves. When you have years of leaves, dried leaves on the ground, it just sets it up. It’s really a fuel for a fire. So they have to do something about it.”

Just to reiterate: climate experts have blamed the recent surge in wildfires along the west coast on record levels of heat and drought, which have been attributed to climate change.

Trump has landed in California, where he will receive a briefing on the west coast wildfires, which have already claimed at least 35 lives.

“There has to be good, strong forest management, which I’ve been talking about for three years with the states, so hopefully they’ll start doing that,” Trump said.

Climate experts have said the recent surge in US wildfires is not due to poor forest management, but rather extreme heat and drought along the west coast.

Moments ago, Democratic nominee Joe Biden warning the fires represent the devastating effects of climate change and criticizing Trump as a “climate arsonist.”

Joe Biden closed his climate speech by noting he continues to pray for Americans on the west coast who have been affected by the wildfires.

“We see the light through the dark smoke. We never give up. Always,” Biden said.

With that, the Democratic nominee concluded his speech without taking any questions from reporters.

Biden criticizes Trump as a ‘climate arsonist’ as wildfires rage

Democratic nominee Joe Biden appears to be unveiling a new attack strategy against Trump, arguing the president’s climate policies represent a direct threat to the country.

Biden took direct aim at Trump’s baseless claims that the Democrat’s proposals were aimed at abolishing the suburbs.

“You know what is actually threatening our suburbs? Wildfires are burning our suburbs in the West,” Biden said. “If we have four more years of Trump’s climate denial, how many suburbs will be burned in wildfires?”

Biden went on to say, “If you give a climate arsonist four more years in the White House, why would anyone be surprised if we have more of America ablaze?”

Biden: Climate change is ‘not a partisan phenomenon’

Joe Biden criticized Trump for injecting politics into his natural disaster response, after one former senior administration official said last month that the president previously wanted to withhold wildfire relief from California because it did not vote for him.

Biden once again argued Trump had “failed the most basic duty to a nation” because he had failed to protect the American people.

Altering an attack line from the president, Biden went on to say, “It’s clear that we’re not safe in Donald Trump’s America.”

In his speech on the wildfires, Democratic nominee Joe Biden argued America had to take decisive action to address climate change.

“We have to act as a nation,” Biden said. “It shouldn’t be so bad that millions of Americans live in the shadow of an orange sky and are left asking, is doomsday here?”

The Democratic nominee noted the wildfires were part of a recent pattern of devastating natural disasters, ranging from hurricanes to intense drought.

“I know this feeling of dread and anxiety extends well beyond the fires,” Biden said. “It’s happening everywhere, and it’s happening now — and it affects us all.”

Democratic nominee Joe Biden is now addressing the west coast wildfires and climate change in a speech at the Delaware Museum of Natural History.

Biden said he was praying for those in California, Oregon and Washington state who had been affected by the wildfires.

The Democratic nominee lamented the “undeniable acceleration of the punishing reality of climate change on our planet and our people.”

Here’s where the day stands so far:

The blog will have more coming up, so stay tuned.

The attorney general of South Dakota, Jason Ravnsborg, struck and killed a man on Saturday night while driving home from a Republican fundraising dinner.

The Republican governor of South Dakota, Kristi Noem, said during a press conference yesterday that Ravnsborg had been involved but uninjured in a fatal car accident, but she did not provide further details.

The South Dakota department of public safety said this today, per the Rapid City Journal:

Ravnsborg, a 44-year-old from Pierre, was driving a sedan westbound on U.S. Highway 14 on Saturday night. He told the Hyde County Sheriff’s Office that around 10:30 p.m. he hit a deer a mile west of Highmore.

The release does not say if Ravnsborg stopped to confirm that he hit a deer or inspect his vehicle for damage. It also doesn’t say if Ravnsborg called 911, the non-emergency line or someone from the office. The Journal has requested audio recordings of this call and all other calls related to the crash.

The body [of] Joe Boever, a 55-year-old from Highmore, was discovered the next morning. The release does not say where Boever was found and who found him.

ABC News will host a town will with Trump tomorrow, two days before Joe Biden participates in a CNN town hall in Scranton, Pennsylvania.

ABC said in a statement, “Chief Anchor George Stephanopoulos will anchor the event, which will provide uncommitted voters a chance to ask the President their important questions before voting.”

The event will be held in Philadelphia, so both Trump and Biden will be in Pennsylvania this week, as the two politicians seek to win over undecided voters in the crucial swing state.

Trump won Pennsylvania by less than 1 point in 2016, becoming the first Republican presidential candidate to carry the state since 1988.

But recent polls have shown Biden leading Trump by several points in Pennsylvania, buoying Democratic hopes that he will flip the state in November.