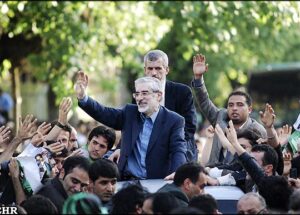 EXECUTIVE SUMMARY: In the summer of 1988, during the premiership of Mir-Hussein Mousavi, thousands of opponents of the Islamic Republic were extrajudicially executed while in prison. Newly published evidence from Amnesty International shows that Mousavi, despite his denials, was aware of the executions, casting a dark shadow over the reformist movement in Iran.

The Shah of Iran left the country in January 1979 after the Islamic revolution. A month later, the leader of the revolution, Aytaollah Ruhollah Khomeini, returned to Iran from exile in France.

As ugly as this history is, the darkest spot on the Islamic regime’s human rights record is the 1988 prison massacres.

In the summer of 1988, thousands of political opponents disappeared from the country’s prisons and were later reported to have been executed. Their bodies were never returned to their families. Many of them were buried in mass graves all over the country, among them the Khavaran cemetery in Tehran. Although it is still unknown how many were executed that summer, Amnesty International puts the figure at at least 5,000.

The executions were ordered by Ayatollah Khomeini himself, and they took place during the premiership of Mir-Hussein Mousavi. Mousavi, a Khomeini loyalist, initially took on the role of the Islamic Republic’s foreign minister. He then served as prime minister from October 1981 through August 1989.

In the 2009 presidential election, Mousavi was one of two reformist candidates who ran against the conservative Mahmoud Ahmadinejad. The latter was victorious, but Mousavi accused him of vote-rigging. This caused one of the largest crises in the history of the Islamic regime, with hundreds of thousands pouring into the streets in protest. Some supported Mousavi while others protested the very existence of the Islamic regime. Ever since then, Mousavi has been a symbol for both Iranians and the Western world of an Iranian advocate of reform and democratic change.

Over the three decades that have passed since the 1988 massacres, the Islamic regime has never officially acknowledged their occurrence. Mousavi, the man who was in charge at the time as Iran´s PM, says he had no clue that the executions were taking place, thus maintaining his image as a reformer and an alternative to the Supreme Leader and the conservatives.

The notion of Mousavi as a democratic alternative is often used to discredit Iranian opposition groups calling for the overthrow of the Islamic Republic. Supporters of reforms who back Mousavi continue to insist that he knew nothing about the 1988 massacres. But members of the democratic opposition claim that reforms by any member of the Islamic Republic are impossible, as today´s reformers are yesterday’s hangmen.

In December 2018, Amnesty International published a clip in which Mousavi was interviewed by the Austrian national public service broadcaster. The interview took place on December 13, 1988. Mousavi was asked about the executions and replied, “We repressed them.”

The clip was considered to be inconclusive, as it is difficult to hear both the questions and Mousavi’s answers. However, last month (August 2020), Amnesty International Iran researcher Raha Bahreini published archived Amnesty International letters proving that the Iranian authorities, including Mousavi, were very much aware of the extrajudicial executions being systematically conducted in Iran in the summer of 1988.

The letters are appeals written on August 16, 1988 by Amnesty International in regard to the executions and sent to a large number of individuals in the regime, including the Chief Justice, the Justice Minister, Iran’s ambassadors, and the Foreign Ministry. So from at least August 16, 1988, Iranian authority figures on all levels knew about the executions.

This revelation has naturally sparked a massive debate among Iranians all over the world about the country’s future.

Both members of the reformist camp and the regime urgently want to keep the myth of Mousavi alive. As long as Mousavi can be touted as the “only alternative to change in Iran,” the regime can combat opposition groups calling for its overthrow. The question is whether the regime and Mousavi’s supporters can continue presenting him as a democratic leader after the new revelation.

The reformist camp of the Islamic regime is in crisis. Its main symbol, Mousavi, was, according to Amnesty International, involved in a gruesome massacre. The current president, Hassan Rouhani, also a reformist, is responsible not only for bankrupting Iran but also for a brutal crackdown on protesters in December 2019 that killed more than 3,000 people.

As long as individuals like Mousavi and Rouhani represent the reformist camp, reforms are highly unlikely to take place. Whether so-called reformers or hardliners are at the regime’s helm, Iran will continue its destructive path of supporting terrorism, conducting espionage, and destabilizing the region.

After Khomeini’s death on June 3, 1989, former Secretary of State Henry Kissinger was asked about Iran´s future. He said, “If we have a political government with some religious authority, then in time a pragmatic approach is possible. If we have a religious government, which is what Khomeini did, then they will rely on the power of fundamentalism to begin to be dominant in the Persian Gulf and to turn against Western materialism and to some extent communism.”

Looking at Mousavi’s background with respect to the newly published evidence, and the brutality shown by Rouhani both as president of the Islamic regime and in his previous role as secretary of the Supreme National Security Council, it is apparent that fundamentalism was at the core of both reformers and conservatives.

The problem, therefore, is the Islamic Republic as an entity, not reformers versus conservatives.

Dr. Ardavan Khoshnood, a non-resident Associate at the BESA Center, is a Criminologist and Political Scientist with a degree in Intelligence Analysis. He is also an Associate Professor of Emergency Medicine at Lund University in Sweden.